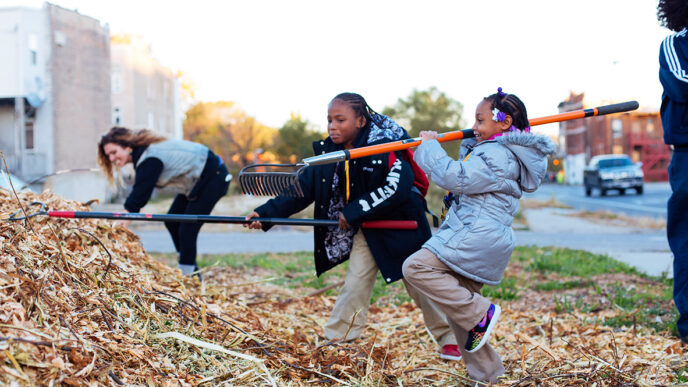 Classmates Alisha Dale and Roosevelt Harris-Williams work side by side, pulling rakes through a mound of wood chips. They will use the chips to smother a patch of weeds in their school garden.

It’s a late afternoon in early November, the last work day of the year, and they’re trying to finish before daylight fades.

A sophomore at North Lawndale College Prep, Alisha enjoys working in this garden.

“It’s really calming,” Alisha says, pushing her rake back and forth. “I like it out here. It feels so good. Then, it’s fun to help them,” she says, nodding toward a family that had stopped to watch, “because we’re doing something that’s really going to contribute to the community.”

Alisha and Roosevelt have helped turn the once debris-strewn lot into a vegetable-growing oasis and vibrant community space.

Their biology teacher infuses lessons with garden-related references to bugs, pests and decomposers (organisms that break down dead or decaying organisms). Those lessons come to life when Alisha and Roosevelt work in the garden, located on a lot across from the school that was approved for use by the alderman.

The garden took root under the guidance of Gardeneers, a local nonprofit that partners with schools to create and sustain garden programs. It quickly became a place of discovery for students and community members, and a neutral ground for building positive relationships with each other and the Chicago Police Department.

Taking a consensus-based approach, students wanted the garden also to be a memorial that honors people in their lives who have passed away, says Rolando Perez, a garden educator from Gardeneers.

Eventually, the garden will have a vegetable production area and farm stand that sells produce to the community.

A grant from the Chicago Fund for Safe and Peaceful Communities provided the resources for Gardeneers to lead community-centered volunteer days at the garden this fall.

The garden volunteer days were among of dozens of programs funded by the Fund—a rapid-response violence prevention initiative among several local philanthropies, including The Chicago Community Trust. Grants provided support for community-led projects designed to promote peace through the summer and the start of the school year by providing young people with positive alternatives to violence, and building unity between community members and the police officers who serve them.

At the North Lawndale garden, officers from the 10th District worked alongside the students to plant a native garden area that will eventually attract much-needed pollinators. The officers are part of CAPS—Chicago Alternative Policing Strategy—a citywide partnership between police and the communities.

Ramiro Alvarez, a seven-year veteran of the Chicago Police Department and CAPS Office Youth Liaison, was one of the four officers who participated. “We have helped in many gardens” in the community, he says, including a butterfly garden at West 16th Street and Central Park Avenue.

Alvarez sees value in positive interactions between officers and community members like these—moments when “we’re not there to take control of a situation that’s out of control.”

North Lawndale ranked second among Chicago’s 77 community areas for violent crime reports between October 19 and November 18, according to statistics compiled by the Chicago Tribune.

While Alvarez acknowledges that parts of North Lawndale “can be a really tough area,” he sees being involved in the garden as giving people “a different perspective on law enforcement.”

The “cops were amazing,” Perez says of the officers who helped in the garden. “They really helped out. Even when we talked about stuff that we needed, they were more than willing to give us materials.”

The officers impressed everyone with their garden knowledge too, Perez says. “Not to say that cops don’t have a green thumb. They do. They know a lot about agriculture. It was fun. We were laughing.”

Agreeing with Perez, Gardeneer educator Brittany Harthan chimes in. “It was nice,” she says about the interaction between the students and officers.

It’s past 5:00 p.m. now and there’s not enough light to continue working. Alisha, Roosevelt and other students begin heading toward the garden’s communal area. The pizzas have arrived. Time to wrap up the workday and the season—and look ahead to the next.