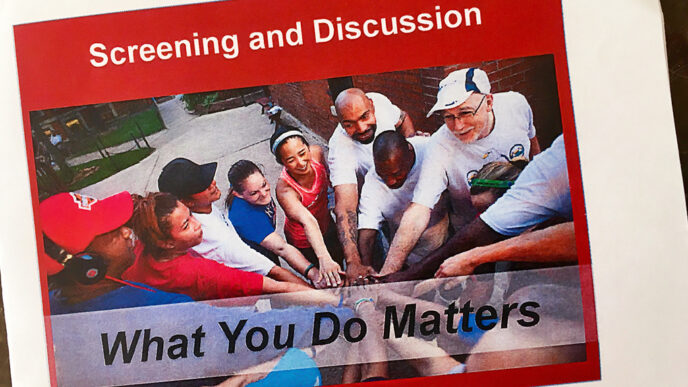 “You take your privilege, and you take all the things you have, to lift other people up.”

Those words of generosity struck a chord for the audience at the Chicago Cultural Center’s Claudia Cassidy Theater on November 19. While snow flurried outside, they gathered for a heartwarming afternoon—a special community screening of What You Do Matters, the new documentary about giving in Chicago airing on WTTW 11 on Monday evening.

Produced by Kurtis Productions, What You Do Matters follows the stories of local residents who have crafted a unique personal relationship to philanthropy. Interspersed with these features are reflections on the nature of giving from dozens more Chicagoans—ranging from nonprofit leaders, to experts in the science of altruism.

The one-hour documentary was conceived by The Chicago Community Trust as part of its Centennial celebration, which took the form of a yearlong effort to celebrate stories of everyday generosity in Chicago.

Saturday’s sneak preview of the film was followed by a panel discussion with four of the film’s subjects. Moderator Jenne Myers, CEO of the volunteer matching organization Chicago Cares, kicked off by asking the panelists for their reactions to seeing the film for the first time.

For Ashley Yong, the experience was profound. “We all take inspiration from other places,” Yong explained. “And to see other people in action was just incredible.”

“I’m never lonely when I’m helping someone else,” Green says. “I never feel out of place.”

The film chronicles Yong’s evolution as a philanthropist: from the weeks leading up to her school prom, when she was preoccupied with saving for the big night, to her profound realization that the money could do so much good for people who needed it more.

Yong spent her prom fund instead on essential supplies—toothpaste, food items, warm socks—which she boxed up and personally delivered to men and women that are homeless in Chicago. Her generous impulse was the seed that would grow into her nonprofit organization, Give A Box.

A common theme for the panelists was demystifying the word “philanthropy.”

For so many of us, “philanthropy” conjures up wealthy individuals who can afford to make transformative financial donations. But in fact, the word derives from the idea of love for humanity—a love which finds expression through giving time, or through showing care for those around us.

Sol Flores reflected on how a dedication to serving people motivates her daily. As the executive director of La Casa Norte, Flores runs the city’s largest provider of services to young people and families who are homeless, or at risk of homelessness.

“There’s nothing else in the world that I’d rather do,” Flores said.

As Cheyenne Green reflected on philanthropy, she noted, “In trying to use the big word sometimes, we’re missing the very small picture.”

Green’s story began with struggle. Her early life was marked by substance abuse, addiction, and a difficult path toward accepting her trans identity.

It was while at Haymarket Center that Green found the care that would transform her life—including treatment, counseling, and a very special therapy dog named Rou.

Today Green feels blessed to be able to see beyond herself, and provide love and nurturing to those around her.

“I’m never lonely when I’m helping someone else,” Green says. “I never feel out of place.”

For several audience members at the Claudia Cassidy Theater, the film’s uplifting stories inspired tears—and questions for the panelists about their experiences of giving.

Loren Greiff responded to questions about how to put a great idea in motion by acknowledging the challenge. “It’s always so much easier not to do something,” Greiff said.

But her story provides a perfect example of the power of starting small. Greiff’s Hump & Cup project sees her in a coffee shop every Wednesday—“hump day”—surprising a stranger with the generous gesture of paying for their drink.

Several panelists agreed that they’ve faced doubt about whether they’re making a difference, or had to defend their passion for giving. “You’ll have those people, and those people will scare you. But keep going.”

Audience members also asked about challenges, setbacks—in the words of one young girl, “Were you ever scared?”

Several panelists agreed that they’ve faced doubt about whether they’re making a difference, or had to defend their passion for giving.

Yong advised, “You’ll have those people, and those people will scare you. But keep going.”

She illustrated her point with words that have discouraged her along the way. “‘You’re not finding [homeless people] a job. You’re not getting them a home,’” Yong quoted critics as saying. “‘You’re just handing them a box.’”

Seated beside her, Green was quick to respond. “I was homeless at the age of 16. And I can tell you: That roll of crackers. That deodorant. That T-shirt. Things like that made a real difference. They made a difference to someone.”

“What you do matters,” Green said. “And don’t let anybody tell you any different.”