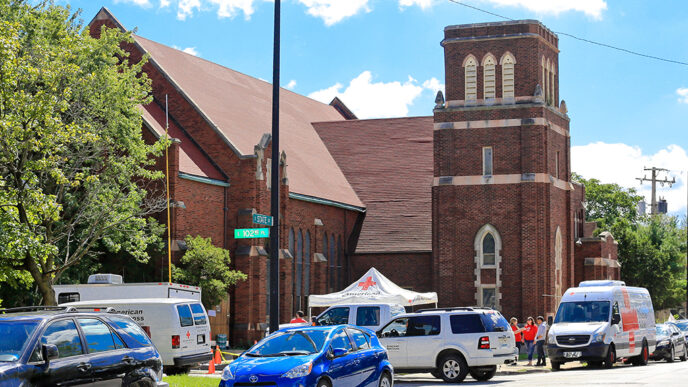 Christine White opened her door on a Saturday morning to welcome the American Red Cross inside.

“I’ve never needed your services, thank God,” she told the volunteer mounting a stepladder to install a smoke alarm on her ceiling. “Hopefully, I never will.”

White’s Roseland neighborhood, on Chicago’s South Side, has one of the highest numbers of fire fatalities in Northern Illinois. That’s why—armed with ladders and drills—volunteers were traveling door-to-door, installing more than 400 smoke alarms before the day was done.

The Red Cross is perhaps best known for the international scope of its humanitarian disaster relief. But here in the Northern Illinois region, the organization also assists families affected by 3 to 4 home fires every day: providing food, shelter, health services and ongoing emotional support.

Through the nationwide Home Fire Campaign, the Red Cross and partners have installed more than a quarter of a million smoke alarms in homes across the country since October 2014—and saved 77 lives.

Here in Chicago and Northern Illinois, the group will install more than 5,500 smoke alarms in the coming months, focusing on neighborhoods at highest risk like the homes here in Roseland.

“Home fires are tragic and devastating to those who experience them, and communities on the South and West Side are some of the highest response areas where our volunteers are called to help in the city of Chicago,” said Celena Roldán, chief executive officer of the American Red Cross of Chicago & Northern Illinois.

In the past ten months, the American Red Cross of Chicago & Northern Illinois has served more than 5,500 people affected by fire. Clients have been provided more than $1,000,000 in financial assistance for emergency care and expenses—a 33% increase over the previous year. The majority of those affected are residents of Cook County’s poorest communities, where the risk of fire is greatest.

“Our aim is to arm as many families as possible with these safety measures to help save lives,” Roldán said.

When a home fire breaks out, experts advise that residents will have as little as two minutes to escape safely.

That’s why, for every smoke alarm installed in Roseland, volunteers also sat down with the family to map out how each member will safely exit the home during a fire in two minutes or less.

At Erma Washington’s home, volunteer Cam Anton and his team installed two smoke alarms then walked her though her home, pointing out possible exit routes through windows and the side doors.

“So right there you’ve got three escape routes, and that really gives you a game plan should an event actually occur. Hopefully not—but if it does, you’ve got a good game plan,” said Anton.

As part of the Home Fire Campaign—a multi-year effort to reduce home fire deaths and injuries by 25 percent—the Red Cross is working alongside fire departments and community groups to teach fire prevention and preparedness. Here are their top tips for your protecting your family: