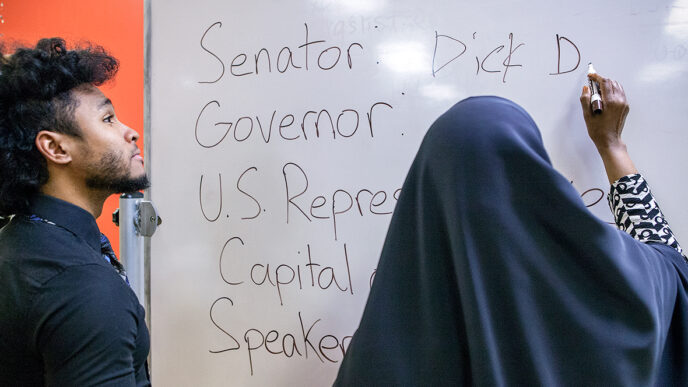 In a Segregated City, Refugees and Volunteers Build Community of Citizenship

After working all day at the Chicago Urban League in Bronzeville, Mahjeed Marrow walks a few blocks through the falling snow and gusty wind, to catch the State Street bus to Roosevelt Road. From there, he boards a Red Line train heading all the way north.

Nearly an hour and a half after leaving work, Marrow arrives at the Granville stop in Rogers Park. His walk is short this time: just another two blocks to the Pan-African Association, where he volunteers every Tuesday night to teach a citizenship class to recent immigrants.

“I’m grateful to be in a position where volunteering is an option for me,” says Marrow, who is 23 and exudes boundless energy.

“The very possibility of engaging with the community in these ways is something that shouldn’t be taken for granted. Not everybody has that privilege.”

The Pan-African Association is a small nonprofit that helps recently arrived refugees develop job skills, learn English, get access to healthcare and start along the path to citizenship. Many of its clients have lived for years in overcrowded refugee camps in Africa after fleeing from war and violence in their homelands. Many others come from Asia, particularly Bhutan.

Marrow, a graduate of the University of Chicago in philosophy, has done volunteer work for refugee organizations before. While living in Northern California, he assisted students in a class on English for speakers of other languages (ESOL) and in a jobs training program, working mostly with refugees from Iraq.

He moved back to Chicago last year to work full time with the IMPACT Leadership Development Program at the Chicago Urban League—the only professional leadership development program in Chicago for African-American executives.

“When I moved back to Chicago, I sought out similar opportunities to work with refugees and reached out to a number of organizations,” Marrow says. That’s how he found the Pan-African Association.

“When I first started here at the Pan-African Association, I had no preconceived notions about the clientele,” he says. “This is a pretty unique thing, especially in a city known for its racial segregation. I see people from all areas of the world with a common goal: citizenship.”

In addition to questions about government and civics, Marrow infuses conversational English practice into his lessons—with a sensitive touch. “I ask them, for example, where they get their coffee. I don’t ask about their pasts.”

When Marrow first contacted the association, he told staff that he was willing to do anything. “He wanted to make a difference in whatever capacity we needed him,” Pietruszka says. “He was willing to do what was needed and always had a good attitude about it.”

Before he knew it, Pietruszka asked Marrow to teach the citizenship class, which he’d never done before. “I was a bit unclear about how things would go,” Marrow says. “Those first few classes were rough. Most of the students spoke no English. I thought, ‘What am I going to do?’”

Marrow has found himself not only teaching how to navigate the road to citizenship, but also how to speak English, making him a de facto ESOL teacher. He created an informal atmosphere in which he encourages students to try speaking and writing in English.

“I try to infuse ordinary conversation in class,” he says. “I ask them, for example, where they get their coffee.” He pauses and laughs. “Most just say ‘From home,’ but I think it’s important to engage them.”

“I don’t ask about their pasts, however. I think that might be insensitive.”

Dedicated to “empowering individuals to live better lives through the strength of community,” the Pan-African Association helps refugees build job skills, learn English, get access to healthcare and start along the path to citizenship. Many of its clients are arriving in Chicago after years in refugee camps in countries throughout Africa; others come from Asia, particularly Bhutan.

During citizenship classes, Marrow often quizzes students about civics and geography. He asks them to name national and local elected officials, and helps them learn to pronounce and spell words using phonetics. He recently asked them to draw a map of the United States.

“The students are highly motivated to become citizens, so they’re all very diligent and focused,” Marrow says. “They’re a joy to work with.”

Patrick Augustin, executive director of the association, says volunteers like Marrow keep the organization working at time when the budget is tight. “Our volunteers are essential,” he says.

During the school year, the association is often flush with volunteers, many of whom come from nearby Loyola University, as well as DePaul University. Most of the students are there to fulfill requirements for service learning.

Marrow, whose day job is at the Chicago Urban League, travels nearly three hours round-trip to teach his classes. “I’ve been invited to a couple of weddings by students and their families,” he says. “I wish I saw them more.”

Pietruszka says Marrow has become quite popular among the citizenship class students. “I have heard from many different clients that they love him,” she says. “People recommend his class and that speaks very well of him.”

Though Marrow lives in Hyde Park and works in Bronzeville, he sees the value in building community among a disparate group of people throughout the city, building friendships and connections.

“I’ve been invited to a couple of weddings by students and their families,” Marrow says. “I wish I saw them more.”