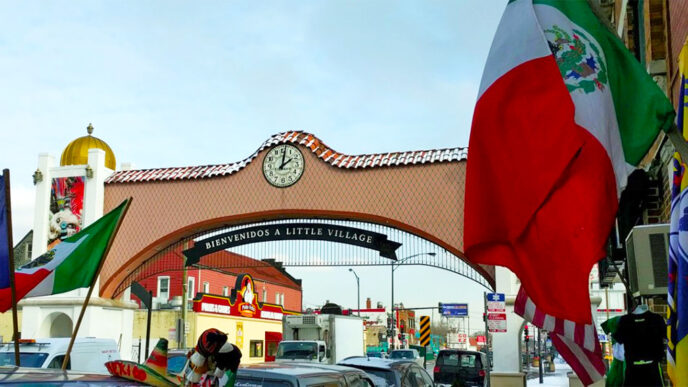 “There is a fear of asking for help.”

Often called “the Mexico of the Midwest,” Chicago’s Little Village neighborhood is a well-known port of entry for immigrant families and a hub for Mexican culture and commerce. Its bustling 26th Street commercial strip boasts Chicago’s second-highest-grossing shopping district, after Michigan Avenue.

However, along with this vibrant cultural heritage also comes a complex set of challenges to health and wellbeing: from systemic racism and xenophobia that keep some residents in low-wage jobs without insurance, to concerns about immigration enforcement and policing that may prevent them from accessing services.

Survey creators at Sinai Urban Health Institute shared the results in a series of neighborhood forums, to spark discussion and build more understanding of the interrelated dynamics of health and community.

Their key findings from Little Village:

Residents’ overall health lags in quality, with 44% of adults reporting “fair” or “poor” health. Adults report an average of 4.9 days of poor physical health in the past month, compared to a U.S. average of 3.8 days.

From the forums: In conversation, Little Village residents illustrated the driving influences of poverty and low-wage employment on their health care. Even for residents who have a job and health insurance, “it’s hard to get time off work to go to the doctor.” Meanwhile, many residents lack access to health care services, with 34% of adults having no health insurance coverage—twice the uninsured rate of 17% found in our previous neighborhood snapshot, North Lawndale. “People don’t have the economic security to afford insurance,” one resident said.

In the past year, 50% of Little Village households received food stamp benefits. 45% of households were food insecure—more than three times the U.S. average of 13%—yet only 15% accessed emergency food.

From the forums: Conversations here illustrated multiple ways that race and immigration status contribute to food insecurity. Many residents only have access to low-paying jobs, where wages are systematically suppressed. “It’s hard to ask for a raise. There is employee abuse. They don’t pay enough, the bosses take advantage,” one said. And those who struggle to afford food may face barriers accessing the aid that’s available. As one community member explained, “There is a fear of asking for help—will [food pantries] ask for papers or documentation?”

33% of adults in Little Village are obese, slightly ahead of the national obesity rate of 29.5%. Of these, 28% consider themselves underweight or the right weight, while 57% tried to lose weight within the past year. 15% of adults in the neighborhood have been diagnosed with diabetes, compared to 9% of U.S. adults.

From the forums: Once again, participants in the community forums drew the connection between poverty or low-wage employment and diet. “A head of lettuce costs $4—that makes it more difficult to eat salad,” one participant said. And when it comes to planning and cooking healthy meals, “parents are working tons… there’s no time to care.”

Residents were also aware of the importance of exercise, but there was wide agreement that their neighborhood was not a safe place for physical activity: “There are parks, but we have a problem with safety.”

Two-thirds of neighborhood residents reported feeling unsafe alone at night; 27% of adults felt unsafe alone in the neighborhood during the day. “When the police do come, they arrive late,” one resident reported. “There should be places for young people so that they don’t loiter in the street.”

As SUHI epidemiologist Pam Roesch said, “The Survey data from Little Village, combined with our community forums, underscored the link between income and health. In so many aspects, from affording healthy foods to accessing quality health care, systematically suppressed wages within this predominantly immigrant population impact community wellbeing.”

From physical environment to clinical care and health behaviors: See more findings from the survey in the Little Village Community Health Profile

This is the second in our series of neighborhood profiles exploring Sinai Community Health Survey 2.0 findings that health experts identify as issues of significance and concern. You can view the first in our series, taking a look at North Lawndale, or explore the complete results at sinaisurvey.org.