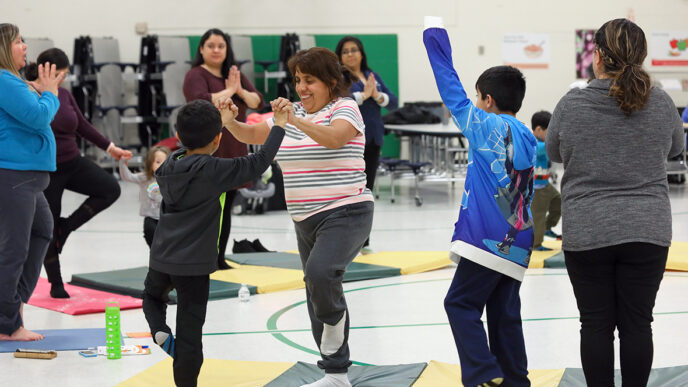 A drive down Main Street in Round Lake, Illinois, will explode stereotypes of the white-bread Midwest. Taqueria Gonzalez. Salon de Belleza. Yelis Bakery. A chiropractor bills himself as “Dr. Latino.” Up the road, the sign outside the auto-body shop proclaims, “Se habla español.”

Round Lake, like much of surrounding Lake County, has a growing Latino population, with many first- and second-generation immigrants from Mexico. Almost 29% of the town’s 18,475 residents are Hispanic, and almost 70% of public school students are as well.

Across the United States, immigrants are increasingly moving outside of major cities to the surrounding suburbs. Mano a Mano Family Resource Center helps connect Latino immigrants in Lake and McHenry counties to services from language and literacy, to child development and parenting programs.

“Historically, immigrants would go to the big city—where there are jobs, ethnic neighborhoods and transportation,” McKenna notes. “But with issues with public schools and violence and jobs, there’s an exodus of people of color who are out-migrating to the suburbs. As the immigrant population has grown in the suburbs, certain communities become receiving communities for people from a particular area.”

Mano a Mano’s mission is to help the area’s new immigrants not just find their footing, but build a solid foundation from which they can thrive. The Trust has supported Mano a Mano’s work for years, through competitive grants and through the Illinois Immigration Funders Collaborative. Most recently, Mano a Mano has received funding from Nuestro Futuro, a donor-led initiative at the Trust to improve the lives of Latino communities across the region. Nuestro Futuro’s current grant making focuses on support for early childhood education and immigration.

“Historically, immigrants would go to the big city—where there are jobs, ethnic neighborhoods and transportation. But there’s an exodus of people of color who are out-migrating to the suburbs.”

Through its Engaged Citizens program, the organization offers comprehensive low-cost immigration legal services. “We have had an increase in people seeking citizenship since 2015,” says McKenna. “Historically Mexicans are less likely to look for citizenship for various reasons, but they are increasing as well. And they are getting citizenship, though it’s slowed down considerably right now.”

“Over time, with the support of the Trust, we have been able to develop a full-service legal program. So at the very least we can assess people’s cases and, if not take them on, then refer them to someone who can,” says McKenna.

“We try to focus on the cases with the most urgent need and also the ones that are the most straightforward. The Trust has helped us build out these services and programming in this time when people are really needing it.”

Mano a Mano provides healthy lifestyle activities that are educational, affordable and fun: from Zumba classes and family yoga programs, to a community garden that provides access to fresh produce and healthy eating.

The Successful Children program, for kids between three and five years old, serves around 200 families each year. “Three-quarters of the kids we see are preschool age but are not enrolled in preschool,” says McKenna. “Our objective is to help empower the parents to be their child’s first teacher at home and in the community, so that when they start kindergarten they’re not behind. We help them develop basic early learning skills and motor skills, so that they are starting at grade level.”

When four-year-old Humberto started coming to Mano a Mano, he didn’t know how to write his name. His mother Margarita, who came to Round Lake from Guerrero, Mexico, would try to teach him. But Humberto would resist, saying he was tired, or get cranky.

“When you’re a parent you want to do everything for your kids, but there’s so many things to teach them you don’t know where to start,” says Margarita.

Last October Margarita saw a Facebook post about Mano a Mano’s program and said, “Wow—that’s for me.” At the first class, she learned some new teaching strategies. Humberto learned to write his own name within a week.

Mano a Mano’s Successful Children program helps children ages 3 to 5 develop basic early learning skills and motor skills, so that they start kindergarten prepared alongside their peers. “Our objective is to help empower the parents to be their child’s first teacher,” says director of strategy and development Megan McKenna.

“It came from him,” Margarita says. “He wanted to learn. He kept saying “Mami, enseñame eso”—“teach me this.” I didn’t have to force him. He’s the one who’s pushing me.” Now, four months later, with a routine and a space where he feels comfortable, reading has become a regular practice.

“I think the program is great,” she says. “To me, as a mom, it’s been very helpful, and he really likes coming here.”

Humberto agrees. “I like learning numbers and letters,” he says.

Connecting with immigrant families can be challenging, says Successful Children program manager Astrid Martinez. They may be fearful of asking for help, especially if they are undocumented. Mano a Mano relies a lot on social media and word of mouth from existing clients like Margarita to reach families who might benefit from services.

Reaching immigrant families comes with obstacles, says Successful Children program manager Astrid Martinez—from lack of transportation, to fear of immigration authorities. Mano a Mano finds success through social media, and through word of mouth from their clients, spreading the word among friends to reach those who might benefit the most.

“People don’t know what kind of help is out there,” says Margarita. “They don’t want to participate because they are private, or just reject it, or they’re afraid.” Or they may find it difficult to access services because, like her, they may not drive.

It’s critical that the program continue, Margarita adds. “I”m taking advantage of it now, but there are other people in the future who are going to want to do this too. It’s very important. If this program didn’t exist then people like me wouldn’t participate at all.”