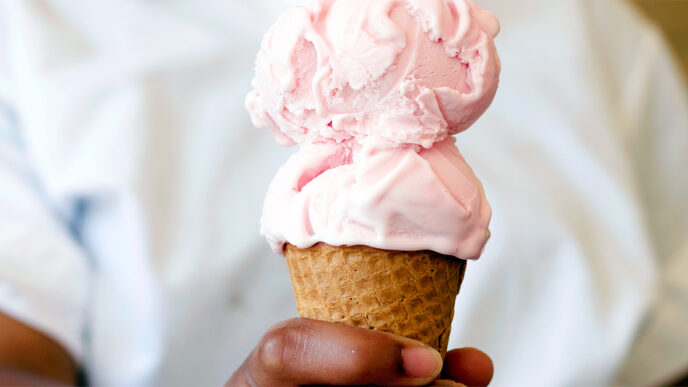 Ice cream for breakfast? In February? In Chicago?

As fundraising concepts go, it might seem a hard sell—but not to Jeni’s Splendid Ice Creams.

[pullquote]What’s better than ice cream for breakfast? Giving to a great cause as you #treatyoself, thanks to @JenisIceCreams[/pullquote]

When the owners of the small Columbus, Ohio-based chain learned that the first Saturday in February had become famous as “Eat Ice Cream for Breakfast Day,” they saw the potential to raise not just money but social consciousness as well.

“We thought opening early and serving ice cream for breakfast would be fun,” says Charly Bauer, Jeni’s director of stewardship (and founder Joni Britton Bauer’s husband). “But we wondered what could we do beyond that that would be different and inspiring.”

When Bauer learned that the Columbus Foundation, that city’s philanthropic powerhouse, had dubbed the entire month of February “Kindness Month,” the idea clicked into place. A story the Foundation’s president and CEO Douglas Kreidler shared about Patagonia donating 100% of its Black Friday proceeds—not just its profits—to environmental causes “reframed our thinking” says Bauer.

The owners of Jeni’s Splendid Ice Creams loved the idea of celebrating “Eat Ice Cream for Breakfast Day”—and as good neighbors, they embraced the chance to give back. So on February 4, every Jeni’s location opened early and donated 100% of the morning’s sales to a local nonprofit or charitable cause.

Inspired by that example, Jeni’s decided to open early on February 4—this year’s Eat Ice Cream for Breakfast Day—and donate all proceeds, dollar for dollar, from sales between 9 a.m. and noon to the foundation’s Gifts of Kindness Fund, which makes one-time grants to individuals and families in crisis.

And then, Bauer says, they started to look beyond Columbus for similar partners in other cities where Jeni’s has a market presence, like Project Healthy Grandparents in Atlanta, and The Refugee Response in Chagrin Falls, Ohio.

In Chicago, that search quickly led them to The Chicago Community Trust’s Unity Fund.

The Unity Fund was launched in 2008 as a response to the recession, providing support directly and efficiently to organizations meeting the needs of local families in crisis. Since then the Fund has raised $7.1 million and distributed 480 grants to 199 area organizations addressing food insecurity, homelessness, employment, health and wellness, and emergency support.

Jeni’s three Chicago shops donated their sales to The Chicago Community Trust’s Unity Fund, a program supporting essential lifelines in the community—from food pantries to homeless shelters to health centers—that get families in crisis back on their feet.

But the Eat Ice Cream for Breakfast campaign with Jeni’s was the first time the Unity Fund had worked with a small business.

“The Chicago Community Trust is very appreciative of the support and generosity of Jeni’s Splendid Ice Creams and their customers,” says director of development Antonio Martinez, Jr. “It is through relationships like this that we, as a community, can leverage the power of collective philanthropy to help those in the greatest need.”

Jeni’s is a certified B Corporation, which means it is certified by the nonprofit B Lab as meeting high standards of social and environmental responsibility, transparency and legal accountability. As B Lab puts it, “B Corp is to business what Fair Trade is to coffee or USDA Organic certification is to milk.”

A social conscience is baked into Jeni’s business model. Says Bauer, “Being a part of the communities that we serve is part of our world.”

This wasn’t the company’s first foray into philanthropy. Jeni’s makes a habit of getting involved with volunteer activities, and frequently donates in-kind gifts and sends their signature ice cream cart to events. But this was the first time the company had staged a big, coordinated public event—and it was a blast.

All together, the ice cream breakfast raised nearly $10,000 for charitable causes in eight cities—and put sweet smiles on hundreds of faces.

“Across the board it really felt communal and happy and kind,” says Bauer. “It was a fun and feel-good atmosphere. They were eating ice cream for breakfast, but people knew why they were there; the philanthropic angle was resonating with them.”

By the end of the day Jeni’s had raised almost $10,000—$1,500 in Chicago alone. It may not seem like much relative to an outfit like Patagonia, but when you consider the unit cost of ice cream—$5 for a small cone—that’s a lot of scoops of Dark Chocolate and Brown Butter Almond Brittle.

“I really hope to make this an annual event,” Bauer says. “We would love to make it bigger and do more for the communities we’re in.”

If that happens, says Martinez, the Trust is on board. When next February rolls around, the Unity Fund stands ready to get Chicago up early for ice cream again.