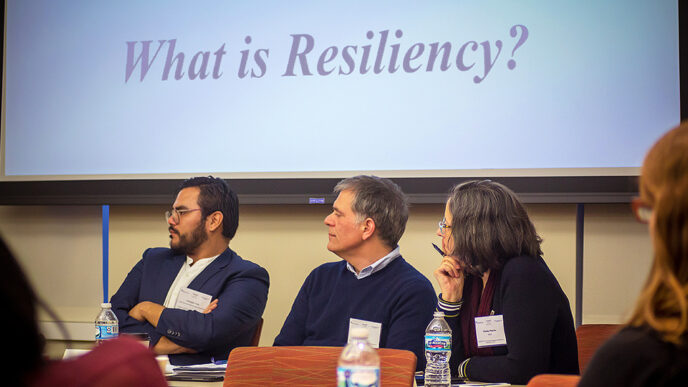 Income among the city’s white population is $12,113 higher than it is nationwide; among black residents, the average income is $5,297 lower.

And while life expectancy in some Chicago neighborhoods is 84 years, in some majority-black parts of the city the average is just 67.

“This is the bad news,” said Roberto Requejo, the program director of Elevated Chicago. “But the bigger news is that we have a movement around racial equity.”

Requejo was addressing a lively crowd gathered at the Federal Reserve Bank of Chicago for a symposium on equitable transit oriented development, or eTOD. The event marked the public launch of Elevated Chicago—a growing force in that movement for equity.

Elevated Chicago is a partnership of organizations committed to transforming the half-mile radius around transit stations into hubs of opportunity. The initiative envisions arts and culture, urban design, social programming and development converging in these zones to address the region’s deeply rooted disparities in racial equity.

Elevated Chicago was made possible through the Strong, Prosperous and Resilient Communities Challenge (SPARCC), a national initiative that Susan Longworth of the Chicago Fed described in her introductory remarks as “a three-year effort to create healthy, climate-smart and opportunity-rich communities.”

“Place has an enormous impact on people: how long they live, how well they live,” Longworth said—an idea illustrated by members of the Elevated Chicago project teams, who introduced their community areas and the challenges they’re tackling.

Ghian Foreman of the Washington Park Development Group described how a community eroded by decades of disinvestment is coalescing around projects to reverse that trend. Beginning with a small group of five nonprofit organizations, the effort has invited more and more community partners to the table to coordinate, and welcomes the support of “community anchors” like aldermen and local officials.

The Elevated Chicago grant is designed to advance this kind of stakeholder collaboration, as well as drive housing initiatives and business incubation. Efforts under consideration range from a youth business incubator and a coworking space in a closed CPS elementary school, to projects reclaiming the neighborhood’s vacant land like a tennis center and an urban arboretum.

In the Marshall Square community surrounding the station at 21st and California, residents watch the gentrification transforming the Pilsen neighborhood to their east, and wonder what it means for their future.

Adrian Soto of Esperanza Health Centers provided a sketch of the neighborhood: home to a predominantly Mexican population, including a significant percentage of undocumented residents; a thriving network of small, family-owned businesses; and a number of health-related organizations, including St. Anthony Hospital.

The community table of local stakeholders charting a vision for this area hopes to coordinate and build from these assets, creating a “mini health district.” As development efforts move forward, the community table prioritizes four themes:

According to Kevin Sutton, executive director of Foundation for Homan Square, the population of his North Lawndale community was greater than 190,000 in the 1960s. Today, it’s less than 60,000.

“But most importantly, we have a lot of families that have stayed the course,” Sutton said. “They are still invested in making sure that we in Kedzie Corridor and Homan Square rise.”

Still, the neighborhood itself is not fully aligned with the needs of those families. The homeownership rate is below 25%; housing stock is made up of smaller rental units that don’t accommodate growing or multigenerational families. Few daycare options are available for working parents seeking to raise children here.

Tackling these challenges to ensure a vibrant, livable, resilient community is the priority moving forward. As Sutton explained, “It’s not so much that we need something new; we just need support for the existing organizations and the existing businesses so they can take those next steps.”

Housing created through transit-oriented development initiatives is often priced for affluent professionals, attracted by the convenience of easy transit access—but unaffordable to a neighborhood’s longtime residents.

So how can a community like Logan Square—and Avondale and Humboldt Park, which are also served by the opportunities generated around the Blue Line station there—capitalize on the station as an asset without squeezing out those with deep roots in the community and losing diversity?

The area is already densely developed, with little open space or city-owned vacant land that could be leveraged to boost supply of affordable housing. Moreover, said Lucy Gomez-Feliciano of the Logan Square Neighborhood Association, “affordable housing comes with a stigma. People don’t want ‘those people’ across the street.”

As Gomez-Feliciano warned, “If we don’t do anything about it, it’s not going to be diverse for very long.”

Following the community presentations was a panel discussion among members of the Elevated Chicago steering committee: Jacky Grimshaw of the Center for Neighborhood Technology, Juan Carlos Linares of LUCHA and Michael Davidson, senior program officer in sustainable development for The Chicago Community Trust. The three were joined by Shelley Poticha of the Natural Resource Defense Council, representing SPARCC.

After the morning plenary session, the symposium’s keynote event featured a conversation between two of the Elevated collaborative partners: Dr. Julie Morita, commissioner of the Chicago Department of Public Health, and Dr. Helene Gayle, The Chicago Community Trust’s president and CEO.

In the afternoon, attendees broke out for a series of focused conversations on topics in equitable transit-oriented development: the intersection of health and the arts; displacement in communities of color; coordinating economic opportunity and climate resiliency.

Following the launch event, what’s next for Elevated Chicago? In the next few years, the initiative expects to deploy millions more in grants and capital investments for projects and programs within a half-mile radius of each eTOD hub, in collaboration with national and local funders and investors.