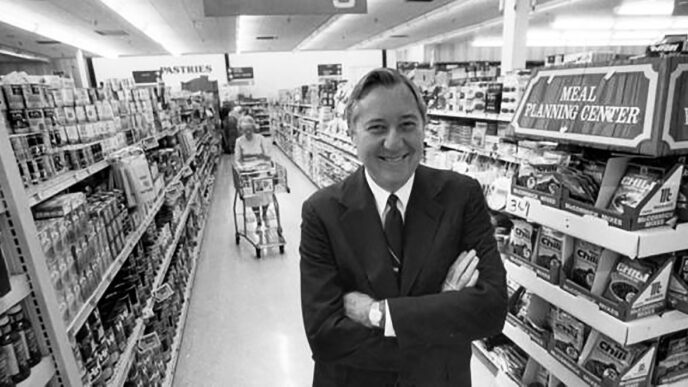 Donald Perkins at a Jewel store in Wilmette. Photo by Walter Kale

How the Former Jewel CEO Paid It Forward

[pullquote]“I never dreamed that I would be involved in giving money away”: Remembering former Jewel CEO Donald Perkins[/pullquote]

As one of three children raised by a working mother during the Great Depression, he was raised with the expectation that college was an absolute must for him—and that the only way to do it was by earning scholarships.

Perkins took the message to heart, making his way through Yale and Harvard Business School. He later recalled:

“It’s ironic that I was the recipient of other people’s philanthropy during the first 24 years of my life, and that not too many years later I was in the fortunate position to play an active role on the other side of philanthropy. I never dreamed during my college days that I would one day be involved in giving money away.”

Perkins’ entire professional life took place at Jewel, where he developed an early sense of community responsibility. “If Chicago isn’t healthy, Jewel isn’t healthy,” he said. After his retirement, Perkins would head a Commercial Club committee aimed at growing job opportunities for the Chicago region.

On his appointment to the Trust’s Executive Committee in 1970, Perkins reflected, “I find significance in the words ‘The Chicago Community Trust.’ Community is what I have grown up serving. And trust: to be entrusted with the care of other people’s money is a responsibility I take seriously.”

In a speech before the Sunday Evening Club, Perkins outlined his philosophy for living. “Things get done in this world because people believe in themselves and in their organizations. Simple achievements, or difficult ones, are possible when physical and mental powers are unleashed by the greatest of human powers—human spirit.”