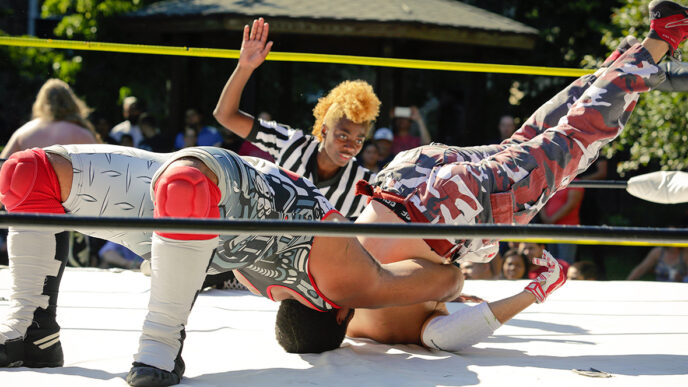 How the Fierce, High-Flying Rivalries of Lucha Libre Unite a Neighborhood

Residents from across Logan Square and beyond streamed steadily into Unity Park, a one-acre green space and play lot in the heart of the neighborhood, on the Saturday afternoon before Labor Day. They brought blankets, lawn chairs, strollers, wagons and even their dogs.

They were coming for a two-hour wrestling event called “Lucha Libre in the Park,” and everyone wanted a good ringside seat.

This was the second year that the Unity Park Advisory Council hosted “Lucha Libre in the Park,” a free community event meant to provide a positive activity during a long holiday weekend that often sees spikes in violence. Lucha libre is a style of wrestling with origins in Mexico—and lots of theatrics.

The event was among dozens of programs across the city that received funding from the Chicago Fund for Safe and Peaceful Communities, a rapid-response violence prevention initiative among several local philanthropies, including The Chicago Community Trust. Grants ranging from $1,000 to $10,000 provided support for grassroots community ideas designed to promote peace in Chicago neighborhoods through the summer and the start of the school year.

Before the main event, a DJ working twin turntables mixed tunes from Chaka Kahn’s “I Feel for You” to Kenny Chesney’s “She Thinks My Tractor’s Sexy.” The emcee, dressed Blues-Brothers-style in all black, got the crowd pumped up and explained the rules.

“To be eliminated, a participant must be thrown out of the ring,” he said, as a dozen professional wrestlers, known as luchadores, lined up under a white tent.

Libby Frank, a 12-year resident of Logan Square, sat reading a book in a canvas beach chair. A regular visitor to the park, she marveled at how packed the park had become. “This by far is the biggest turnout I’ve seen,” she observed.

Around 2:45 p.m., the luchadores filed out into the open dressed in wildly colored bodysuits, knee-high lace-up boots and lucha libre’s trademark masks. The crowd whistled and roared as the flamboyant wrestlers—with names like The French Cactus, Bazooka, Kidd Foxx and Tigre Asiatico—climbed into the ring. After introductions, the match began. The luchadores tossed and flipped, slammed and pinned each other.

“The more noise you make, the better the action gets,” the emcee shouted. Boos and cheers rose from the crowd. Crammed among the wrestlers inside the ring, the referee climbed out to oversee the action. Eventually, Flash Harris and Iceman Norton were left battling it out, splayed across the mat. Ringside spectators cheered and chanted until, finally, Iceman held up his arms. He was the winner. Even spectators seemed exhausted. “Glad it’s over,” someone yelled.

But it wasn’t over. More high-flying one-on-one matches were to come. One round featured female luchadoras The Misfit Roxxi and Demeter the She-Cat. Fans honked horns and screamed, “Yeah, let’s get her!” and “Go, Roxxi!” as they slammed each other around the ring.

Wrestler DJ Summers, 24, said although the matches are over-the-top and exaggerated, real contact is made and wrestlers do get bruised.

Asked about the spikes in violence around holiday weekends, Summers attributed a lot of it to rival gangs bragging on social media, then retailiating in the streets. “That’s what’s sad about my generation.”

A lot of young people in the city don’t have mentors to help them find something more constructive to do, said another wrestler who calls himself Flash Harris. Harris was a crowd favorite, taking time to let a mother photograph him with her sons.

Events like this one bring the community together and promote peaceful family-oriented gatherings, Harris explained, and he was happy to play a part in the effort.

Many in the park were parents with their children. Young boys in lucha libre masks imitated the wrestlers’ less outrageous moves, as older men and women sat watching and smiling.

Gus Williams, 33, who lives in the Irving Park area was there with his son, 3, and daughter, 8. He’d never been to Unity Park and had come to see his friend, Kidd Foxx, perform. “I really liked the event,” he said. “I definitely want to come back.”

As she packed up the Advisory Council’s table well past the scheduled ending time, communications and development chair Clare Fauke was pleased with the event. Raffles sales had been brisk and the black souvenir T-shirts had sold out. “It was great to get people into the park and give them something to do, make them feel like this is their park,” Fauke said.