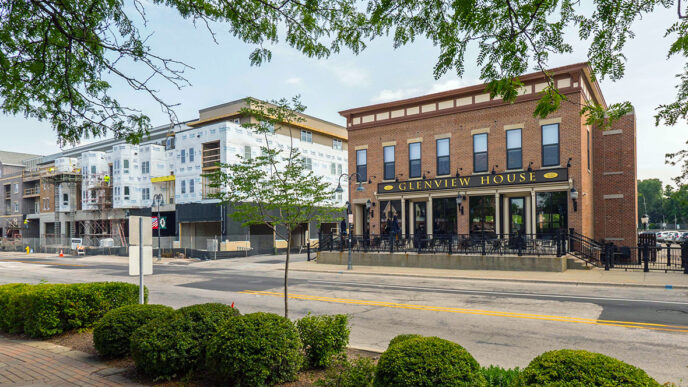 Nancy Mullarkey describes herself as a “happy, active retiree” who spends much of her time working with her church, Glenview Community Church. She also volunteers at a Rogers Park elementary school, reading with first- and second-graders. But social justice advocacy has become her most fulfilling occupation since leaving the corporate world.

“It satisfies my need to be heard and to make change,” Mullarkey said.

One morning, a letter to the editor in the local newspaper caught her eye—and convinced Mullarkey that she had to speak up. That moment ended up sparking an advocacy campaign for fair housing in upper-middle-class Glenview.

The letter criticized the Glenview Board of Trustees’ vote to allow landlords to refuse to rent to tenants with Housing Choice Vouchers. Through a federal program, the vouchers are provided to low-income, elderly and disabled renters to subsidize apartments that they otherwise could not afford.

“I was just horrified. My initial reaction was ‘This is just awful,’” Mullarkey recalled. It went against her belief that low-income people deserve a shot at working their way out of poverty—including the chance to live in decent housing, and to educate their children in good schools.

Mullarkey’s church had just adopted the slogan, ‘A house for all God’s people.’ “If we live in a village that doesn’t allow ‘all God’s people’ because the poor can’t afford to live here, that’s not very good.”

Mullarkey decided to take the matter to her church’s Faith in Action team, which had received training from the nonprofit Community Renewal Society to advocate for equity in public policy.

The team quickly swung into action, consulting the housing justice nonprofit Open Communities and the League of Women Voters to launch a repeal campaign. They hosted a community forum and launched a letter-writing campaign to local newspapers and to trustees who might be persuaded to back a repeal.

After more than a year of work, the ordinance came up for a repeal vote in February 2015. About 15 members of Mullarkey’s church were among those who came to speak on behalf of a repeal. Five to one, the board voted to overturn the ordinance.

But two successive votes were needed to make the decision final, and more advocates and adversaries attended the second meeting. After the second vote ratified the repeal, Mullarkey remembered, “There were high-fives and cheers all around the parking lot.”

After learning about efforts to prevent low-income, disabled and elderly people from renting in Glenview, resident Nancy Mullarkey mobilized her church and other advocates to defeat it. “If you don’t act on what you believe in, you’re not going to live in the society you want to live in,” Mullarkey said.

“One of the things that I sense in our culture is this ‘I’ve got mine and I deserve it, and if you don’t have what I have it’s because you don’t deserve it,’” Mullarkey said. “We all know that a lot of what we have is the result of what we’ve done.”

“I’d say that it’s very important for people to act on their moral code, whether it be a code that comes from religion, ethics or upbringing,” she said. “If you don’t act on what you believe in, you’re not going to live in the society you want to live in. And you can be effective. You can make change.”