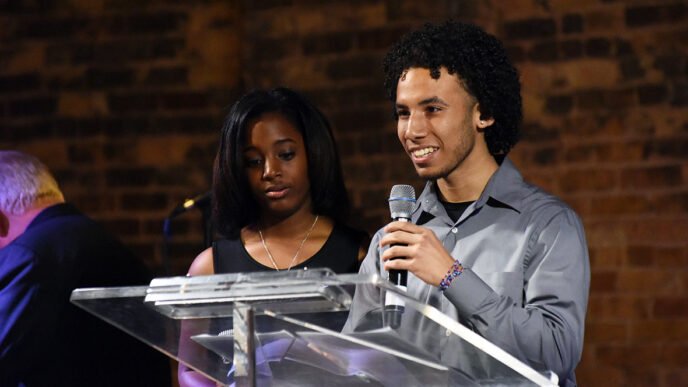 How a Chicago Student’s Commitment Got Magic on His Team

Justin Carmickle’s mother thinks he should write a book about the amazing journey service has taken him on—but he says, “It’s not the end of the story yet!”

Carmickle, 17, who graduated this spring from Advantage Academy of Devry University in Chicago, was a freshman at a different high school when he decided to start chipping away at the 40 service hours he knew he would need for graduation. Even at the time, he was an athlete and a good student, though he says he hung with the wrong crowd sometimes.

Carmickle’s first volunteer outing required him to get up at 6 a.m. and go downtown one Sunday morning to hand out refreshments to runners in the Chicago Marathon.

“I thought it would be so boring,” he recalls—but he had a blast. He now calls that day “my jumpstart,” the beginning of an extraordinary four years of service that gave his young life a narrative he could be proud of and earned him rewards he had never dreamed possible.

Last April, during the first We Day Illinois, a celebrity-studded event sponsored by international youth-empowerment organization Free the Children, retired Los Angeles Lakers basketball star Earvin “Magic” Johnson awarded college scholarships to Carmickle and another Chicago-area teenager, Destiny Watson. Carmickle was chosen in part because of the nearly 200 service hours he had performed since that first marathon.

We Day was free to students who took part in ambitious service projects through their schools, and Carmickle thought it was “pretty sweet” to get a free ticket to a concert. In addition, he and Watson were chosen to speak at a dinner for the event’s sponsors the evening before the concert.

Johnson, who also spoke at the dinner, was so moved by their stories—two young people without much of their own, who nonetheless were passionate about trying to make the world a better place—and their good works that he decided on the spot to help Carmickle and Watson realize their dreams. Johnson’s foundation will pay for their college educations, according to an official with Free the Children.

Carmickle hopes to be a doctor someday, to help people like the ones he has grown up around in some of Chicago’s poorer neighborhoods. He presently lives with his mother and 15-year-old brother in Humboldt Park. Providing a good role model for his brother has been a major motivation for him over the past couple of years, Carmickle says. He’ll enroll at the University of Illinois at Chicago in the fall.

One thing Carmickle says he learned from We Day was the value of “bringing noise” to service, of making it look “cool” so other young people will want to get involved.

As a junior, Carmickle transferred into Devry, which has a service club. That made doing service, which he had grown to love, much easier, because he was surrounded by peers who had serious plans for the future, and who also wanted to serve.

Carmickle says he will always cherish the Hunger Games-themed field day at Devry he helped found last year. The days were fun, last year and this, but also collected hundreds of cans of food for hungry people in Chicago. Service club members dressed up for the event as characters from the Hunger Games movies.

“I wore a suit with a crazy-looking beard, glittery makeup and spray-painted hair. We wanted [other students] to be talking about how cool we looked, maybe saying, ‘We should join next year,’” Carmickle says about this year’s event.

He is amazed at the good things that have come his way as a result of service.

“I never thought I would get something for doing community service,” Carmickle says. “I was doing it from the bottom of my heart.”