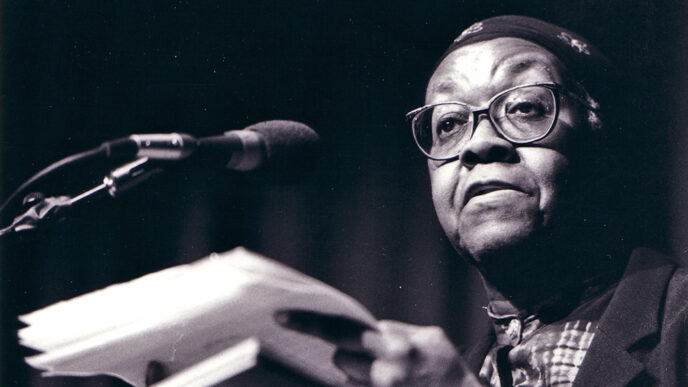 “In order to be heard, one had to shout. Whispers were not heard at all.”

With these words, former U.S. Poet Laureate Rita Dove paid tribute to the fiercely original poetic voice of Gwendolyn Brooks—the first African-American writer to be honored with the Pulitzer Prize.

“Her ability to sing the song of those around her—her community—and make that come alive to the entire world: that was something that has always been a beacon to me,” said Dove.

This groundbreaking event marked the first time that the five living African-American Pulitzer Prize-winning poets had gathered in the same room.

Rita Dove, Natasha Trethewey, Yusuf Komunyakaa, Tracy K. Smith and Gregory Pardlo—the five living black winners of the Pulitzer Prize in poetry—gathered together at the Art Institute of Chicago in celebration of the life of Gwendolyn Brooks. They were joined by Brooks’ daughter Nora Brooks Blakeley (center) and Quraysh Ali Lansana (fifth from left), artistic director of the Our Miss Brooks 100 celebration.

Kicking off the evening, poet Quraysh Ali Lansana shared his own memories of studying under Brooks, and working alongside her to fulfill her vision for an annual open mic contest for young poets, with a prize paid out of her own pocket. Today Lansana is the artistic director for Our Miss Brooks 100, a celebration of her legacy in her centennial year.

Lansana brought Brooks’ work to life on stage, leading the audience in a group recitation of her famous 1960 work “We Real Cool.”

Then each poet read a favorite work by “Miss Brooks,” as she was respectfully known, followed by an original poem of their own. Afterwards, they sat down for a panel discussion led by Natalie Moore, South Side bureau reporter for WBEZ.

THE POOL PLAYERS.
SEVEN AT THE GOLDEN SHOVEL.

We real cool. We
Left school. We

Lurk late. We
Strike straight. We

Sing sin. We
Thin gin. We

“The national psyche was not ready for Miss Brooks,” explained Gregory Pardlo. “She was that far ahead of her time.”

Reflecting on her influence, Yusuf Komunyakaa said, “I admire the fact that there’s a singing inside of each poem, it seems. Her kinship to lyricism. That layered intensity, that spirit, that passion, that belief. I learned from that.”

“In some way, the resurgence or the flourishing of small presses now is owing in some part to that gesture of Brooks’,” Smith said.

“We have these moments when black people do something extraordinary and we say, ‘Oh, she’s exceptional.’ And don’t get me wrong—she is exceptional,” said Trethewey. “But she comes from an exceptional community. She told the world, ‘I represent what is true about this community.’”

“She comes from an exceptional community. She told the world, ‘I represent what is true about this community.’”

Through June 2018, dozens of institutions, artists and educators will collaborate as part of Our Miss Brooks: A Centennial Celebration to produce readings, performances, school programs, discussions, exhibits and more. OMB100 is supported by Allstate, Forefront and The Chicago Community Trust.

Bringing the evening to a close, the Trust’s president and CEO Terry Mazany told the artists assembled on stage, “Each of you as poets has shown us how alive her legacy is.”

“No other poet has captured the essence of Chicago life more than Gwendolyn Brooks—whose optimism, wisdom and hope will be our compass.”