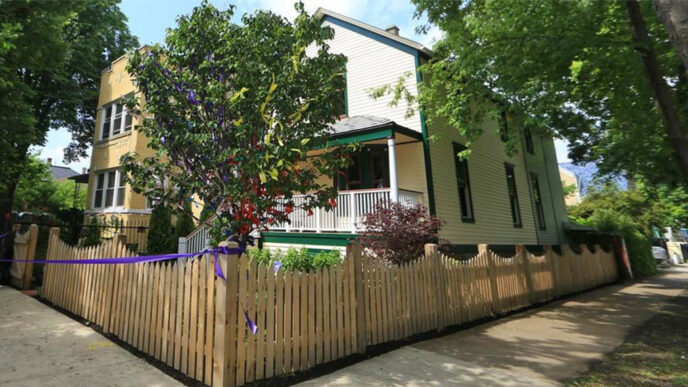 “A lot of moms can’t get the nutrition they need.”

Tucked into Chicago’s northwest side, Hermosa—“beautiful” in Spanish—is aptly named for its scenic residential blocks. The community’s diverse population includes many families of Mexican, Puerto Rican, Guatemalan and Ecuadorian descent.

Hermosa’s population highlights the structural barriers to wellness that immigrants face. From poor insurance coverage, to inadequate health care access, to discriminatory policies that amplify stress, these factors take a toll on mental and physical health.

Sinai Community Health Survey 2.0, a community-driven survey conducted in Hermosa and eight other areas around the city, highlights the health inequities resulting from socioeconomic barriers to opportunity.

Survey creators at Sinai Urban Health Institute shared the results in a series of neighborhood forums, to spark discussion and build more understanding of the interrelated dynamics of health and community.

The key survey findings from Hermosa:

37% of adults in Hermosa report having only “fair” or “poor” health (as opposed to “good,” “very good” or “excellent”). That’s more than triple the national average of 12%, while the average citywide is 18%. But it’s consistent with adults of Puerto Rican or Mexican origin across all Survey communities, who report “fair” or “poor” health at roughly double the rate of white residents.

From the forums: Participants were keenly aware of the interrelation between mental and physical health, and how that intensifies poor health in the community. “There is high somatization of anxiety,” one said. And especially “for many women, mental health manifests physically.”

Infants born prematurely (less than 37 weeks) or at a low birth weight (less than 5 pounds, 8 ounces) are at increased risk of immediate life-threatening health problems, long-term complications, developmental delays and infant mortality. In Hermosa, 16% of mothers have had a baby born prematurely. 21% of mothers have given birth to a low birth weight baby—the second-highest proportion among all communities surveyed, after North Lawndale.

From the forums: Community members were aware of infant health issues, reporting that “there’s lot of low birth weight babies, especially in lower socioeconomic neighborhoods.” They connected these concerns with low income and poverty—“A lot of moms can’t get the nutrition they need”—as well as with maternal health, echoing the earlier insights that “women experience stressors that can become clinical.”

From the forums: Residents traced the current climate of anti-immigrant action to its effects on residents’ mental health. “Anxiety is high because of political issues and fears of deportation,” one participant explained—fears which not only contribute to stress and anxiety, but discourage people from connecting to institutions like health care systems that could help.

Even when residents do feel secure reaching out for support, they may struggle to find resources available to them. “We see budget cuts for mental health services, and less insurance coverage,” one forum participant reflected.

Among adults in Hermosa, nearly half—46%—reported witnessing domestic violence. 22% of women, and 23% of men, reported having experienced intimate partner violence themselves.

From the forums: The prevalence of intimate partner violence rang true at the forums, where one participant suggested, “This is likely under-reported.” The discussion brought up many reasons why those who experience violence might not speak up, including different understandings of what constitutes “violence.” As one explained, “Emotional and verbal violence is often not seen as violence.”

The same fear of interacting with authorities that can inhibit seeking mental health care—including the threat of deportation—also affects residents’ willingness to report domestic violence. “Women want to be safe, but they also don’t want bad things to happen to the perpetrator,” one forum attendee said. “It’s hard to believe it’s ok to call police. People don’t want ICE involved.”

As SUHI epidemiologist Charlotte Picard summarized, “Our findings from the Survey and community forum in Hermosa emphasized the challenges that barriers to accessing resources cause many families. It can be difficult for individuals to address issues like personal safety or finding healthcare coverage without structural support and this can contribute to both mental and physical health concerns.”

From physical environment to clinical care and health behaviors: See more findings from the Survey in the Hermosa Community Health Profile

“One of the most powerful takeaways from the Sinai Survey findings is understanding how much our health and wellbeing is shaped by the community around us,” said Kristin Monnard, program manager for Sinai Urban Health Institute.

“Sinai Survey findings reflect the importance of looking at—and addressing—health at the local level. However, the local findings that we see from the Survey communities are reflections of broader policies and structural factors,” Monnard said. “While we need more resources at the local level, we also need structural change at the city, state and national level.”

This is the fifth in our series of neighborhood profiles exploring the Sinai Community Health Survey 2.0 findings that health experts identify as issues of significance and concern. You can view the earlier profiles in our series, taking a look at North Lawndale, Little Village, West-West Town and Humboldt Park; or explore the complete results at sinaisurvey.org.