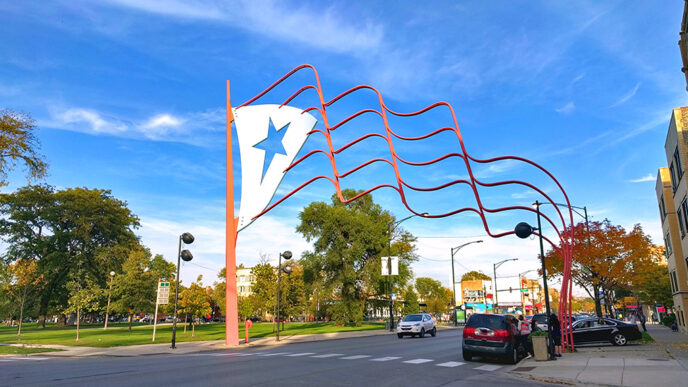 “We need to take away shame of getting support.”

Pay a visit to West-West Town’s main strip, and you’ll know you’ve arrived when you pass beneath a 59-foot-tall steel archway in the shape of the Puerto Rican flag.

This stretch of Division Street, known as Paseo Boricua, is the cultural capital of Chicago’s Puerto Rican community. Home to the National Museum of Puerto Rican Arts and Culture—the only museum in the country dedicated to celebrating Puerto Rican identity—the neighborhood is visually rich with murals inspired by that heritage, and facades modeled after the architecture of old San Juan.

Informally known as East Humboldt Park, this neighborhood is actually the western edge of the West Town community area (west of Western Avenue). And though it maintains a strong cultural identity, the area has experienced demographic transition and gentrification in recent decades. Despite the influx of financial investment, many residents—particularly people of color—continue to face barriers to optimal health.

Sinai Community Health Survey 2.0, a community-driven survey conducted in West-West Town and eight other areas around the city, highlights the health inequities resulting from socioeconomic barriers to opportunity.

Survey creators at Sinai Urban Health Institute shared the results in a series of neighborhood forums, to spark discussion and build more understanding of the interrelated dynamics of health and community. For the West-West Town and Humboldt Park communities, a joint forum was held that welcomed participants from both communities, due to the close partnerships that transcend formal borders between the neighborhoods.

In the past year, 31% of West-West Town households received food stamp benefits. 30% of households were food insecure—more than twice the U.S. average—but only 13% accessed emergency food services, such as a food pantry or soup kitchen.

From the forums: As in many communities, West-West Town residents shared their experiences navigating the intersection of low income, hunger and food insecurity. In addition, they attributed the gap in accessing emergency food to a stigma associated with asking for help. As one community member said, “We need to take away shame of food insecurity and getting support.”

Residents also detailed the practical obstacles to accessing services. “You can’t always get to emergency food because of the time it’s open and the cost to get there,” one said. “The more barriers we create to getting emergency food, the less people will use it.”

From the forums: It was clear to community residents that, due to societal norms stigmatizing mental health challenges, individuals are reluctant to admit their own struggles. As one attendee expressed it, “Many people don’t acknowledge mental illness. They’re afraid of the stigma and minimize the impact it has on them so they under-report.”

Further, residents who overcome such fears and seek care may not find services available, particularly in the wake of widespread mental health clinic closures. Stated simply by one forum participant, “We need affordable mental health access.”

“Restraining orders should be longer. When I tried to get mine extended, the judge said I’d have to wait for him to hurt me first. I’ve already been shot. I don’t want to die and leave my kids.”

Among adults in West-West Town, 43% reported ever witnessing domestic violence. 25% of women, and 19% of men, reported having experienced intimate partner violence themselves.

From the forums: Conversation went straight to the heart of the complexity of violence intertwined with intimacy and attachment in close relationships. As one resident explained, “People may not recognize emotional abuse, or may minimize it by saying ‘At least he’s not hitting me.’”

Another community member shared their personal experience of trying to escape, and facing a lack of structural support. “Restraining orders should be longer. When I tried to get mine extended, the judge said I’d have to wait for him to hurt me first. I’ve already been shot. I don’t want to die and leave my kids.”

From physical environment to clinical care and health behaviors: See more findings from the survey in the West-West Town Community Health Profile

Established in 2002, Sinai Community Health Survey is the largest community-driven health survey ever conducted in Chicago. Its creators had three goals:

This is the third in our series of neighborhood profiles exploring Sinai Community Health Survey 2.0 findings that health experts identify as issues of significance and concern. You can view the earlier profiles in our series, taking a look at North Lawndale and Little Village, or explore the complete results at sinaisurvey.org.