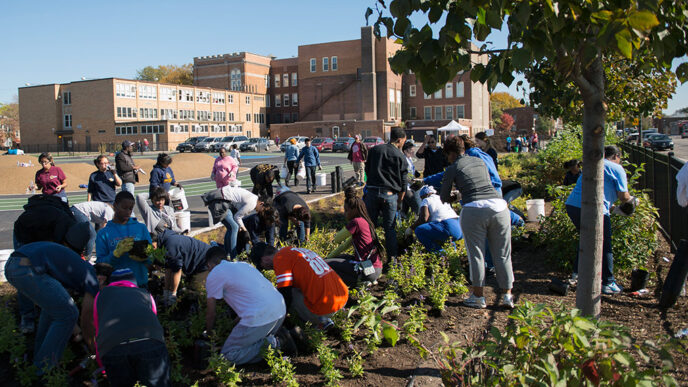 Building safe outdoor places for kids to play—and tackling urban stormwater management problems along the way. That’s the fresh approach that earned Space to Grow an Honorable Mention in the Center for Active Design: Excellence Awards at a ceremony on May 11.

Recognizing the transformative role that the design of buildings and public spaces play in reducing obesity and chronic disease, the international awards honor innovators at the intersection of design and health. Space to Grow was the only Chicago-based project to earn recognition, alongside such innovations as a plan for promoting cycling as a safe alternative to driving in Istanbul; the conversion of a former truckyard in Tulsa into an outdoor recreation space; and the creation of a mixed-income housing development in Albuquerque maximizing access to jobs, transit connections and walkability.

Urban neighborhoods suffering from decades of disinvestment may face a wide range of challenges—from crumbling infrastructure, to increased crime rates, to higher rates of obesity and chronic disease. Space to Grow is a unique initiative to help address many of these concerns for Chicago’s communities.

Crumbling concrete schoolyards at Chicago Public Schools are transformed into greenspaces—a scarce resource in many low-income neighborhoods. The new grounds include zones for physical education and active play, plus edible gardens that support nutrition and health curriculum. The yards also serve as safe outdoor venues for performances and cultural events, which are frequently lacking in the surrounding communities.

After a year of planning, construction and volunteer work days, the first four schoolyards are ready for the entire community to use and enjoy at pilot elementary schools across the South Side. Planning is now underway at the next round of six schools, scheduled for completion in Autumn 2015.

Space to Grow is an initiative of Openlands and Healthy Schools Campaign, two long-time Trust grant recipients. The project is funded by Chicago Public Schools, the Chicago Department of Water Management, and the Metropolitan Water Reclamation District of Greater Chicago, with a total of $51 million secured to transform 34 schoolyards over six years.

This partnership, and its intersectional approach to co-occurring neighborhood challenges, offers a powerful example of visionary thinking that can transform the quality of life in our communities.