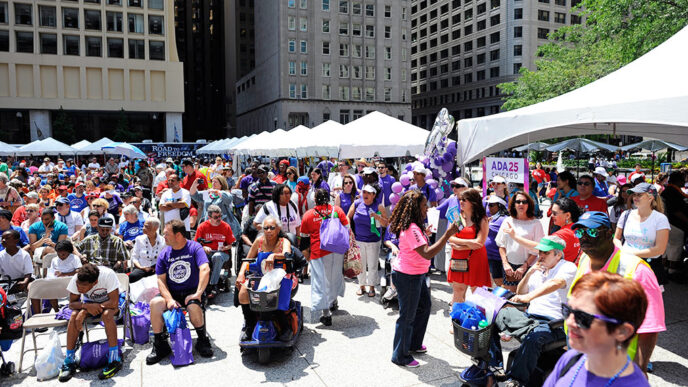 Greater Together with Technology

I was a teenager in the 1980’s and remember disability activists taking over bus routes and rolling in front of buses in acts of civil disobedience. There was one specific time when I was waiting to get on a bus and activists blocked it from leaving the stop. It was an astounding personal experience for me to witness; they were using the same methods of protests from the Civil Rights Movement of the 1950’s and 1960’s, and many other human rights movements throughout the world.

I have always been interested in civic data and how government agencies interact with residents. Throughout my career as a technologist, I’ve done a lot work with the Chicago Transit Authority (CTA) around transit apps, focusing on bus tracking technology. In 2005, I started a rider-to-rider communications system called CTA Alerts that allowed riders to communicate route updates with each other via text, which the CTA helped to implement.

Through my work with the CTA, I became aware of a connection between the data used for bus tracking technologies and a lawsuit filed by Access Living in 2000 against the CTA to provide equal access to people with disabilities on its trains and buses. The consent decree filed with the federal government required bus drivers to call out audibly every single bus stop, which worked… but wasn’t optimal.

The CTA came up with a better method: the Global Positioning System (GPS) for buses in order to determine where the bus was and signal an automated machine announcement of every stop. That system is now the basis for every single transit app and transit data innovation in the United States. I wish there wasn’t a 20-year gap between technologists’ understanding of the needs of people with disabilities and the implementation of technology that addresses the basic human rights those activists I witnessed years earlier were fighting for.

When it comes to technology, we see again and again that there is no difference between accessibility, usability and good product design. Technologies like Cascading Style Sheets, which set the basic rules for the display of web pages, and swipe technology that allows a user to continue to type on their cell phone without lifting their finger off the screen, started out as innovations meant for people with disabilities but are useful to everyone. Describing technology as “accessible” and thinking that it is only designed for people with disabilities is an artificial distinction. Creating accessible technology makes it better for everyone.

Because in order to fulfill our mission of improving lives in Chicago through technology, we must think about all Chicagoans. What really matters is that we embed the principles of serving everyone into everything we do; people with disabilities happen to fall into the certain subset of human beings that is everyone. That is the way Smart Chicago thinks about our work—not as doing accessibility work, but as serving the greater community.

That’s why we—Smart Chicago—are partnering with ADA 25 Chicago, which is leveraging the 25th anniversary of the Americans with Disabilities Act to improve the quality of life for people with disabilities in Chicago in four key areas: education, employment, community inclusion and technology. Technology, in particular, has played a crucial role in the first 25 years since the ADA, and everyone in Chicago has benefited from the innovations it’s brought about—though they may not realize it.