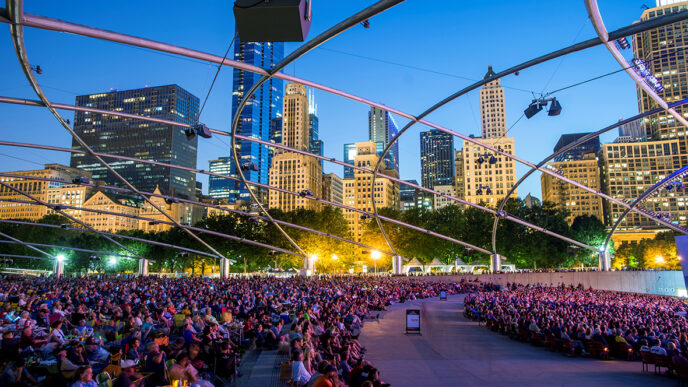 Grant Park Music Festival: A Year in the Life

Every year, the Grant Park Music Festival presents 34 world-class concerts in 10 weeks, plus outreach and educational programs, for a combined attendance of approximately 300,000 people. With a year-round staff of only 10 people, pulling it all off seems like magic.

What makes it possible is a solid routine, developed through more than 80 years of presenting free outdoor classical music performances. The planning starts long before the season opens: By the time the stage lights went down on the final concert of 2017, a lot of the planning for the 2018 season already was in place.

In fact, the program for each year is set before the previous Festival even starts—because once the season starts, it’s too hectic to do much planning.

Artistic director and principal conductor Carlos Kalmar travels around the world searching for musical selections for the Festival and hearing young musicians perform. As Kalmar describes it, “I listen, listen, listen.”

Kalmar likes to pair a well-known piece with a lesser-known one. “You want the audience to know what you stand for,” he says. “We do things that others cannot. Because our concerts are free, we have the freedom to perform a wider range of music than most orchestras.”

In the weeks after the season ends, the staff tidies up from the whirlwind activity of the summer. They return the rented instruments and sheet music and the borrowed coffee pots, add data into the performance log—then take much-needed vacations.

Artistic director and principal conductor Carlos Kalmar travels the world, listening to emerging musicians and searching for new music selections for the Grant Park Music Festival. “Because our concerts are free, we have the freedom to perform a wider range of music than most orchestras. We do things that others cannot,” Kalmar says. Photo by Patrick Pyszka.

In September, contracts for the next summer are sent to the musicians. The musicians must return the contracts within a few weeks, so the artistic staff can see who plans to return and who does not. When they know which positions need to be filled, they start advertising the vacancies through musicians’ unions and setting up the audition schedule for the early part of the year.

In October and November, guest artists and guest conductors are finalized. Matching a singer to a particular part is difficult: not only must the singer’s voice be suitable for that role, but each voice must blend well with those of the other singers.

With the program and guest performers in place, in December the marketing staff can begin the steps that go into announcing and promoting the season, such as collecting artist photos, writing a short description of each concert, working on the brochure, preparing the website for the season announcement and kicking off the membership campaign.

In the new year

The season is announced to the public in January.

Auditions for the orchestra and chorus take place during the early months of the year. This year, 222 people auditioned for chorus director Christopher Bell. Seven regular members and 31 supplemental singers were accepted, bringing the roster to 178 people. Each person is ranked for use in each concert. An elaborate spreadsheet keeps track of the sequence in which each singer would be called for each production.

Two hundred thirty-seven musicians auditioned for five orchestra positions—70 of those for the principal tuba seat alone. According to festival organizers, the first round of auditions allows the musicians to show that they have the requirements: impeccable intonation, rock solid rhythm, beauty and clarity of tone. The second round of auditions allows them to show their artistry and musicality.

Meanwhile, the Festival librarian starts to locate scores of the music to be performed. The Festival rents most of the music, especially newer works.

The scores arrive about six weeks before the season begins. The librarian’s goal is to “make sure that the right music gets to the players at the right time”—but first, the librarian must copy bowing instructions into the scores for string players. Bowing instructions tell the musicians which part of the bow to use to get the kind of sound that the conductor wants for this performance: the tip of the bow produces a softer, quieter sound, while the end close to where the bow is held, called the frog, produces a more robust note.

Early each year, the Festival holds auditions for its orchestra and chorus. This year, 237 musicians vied for just five open orchestra seats—70 for the principal tuba position alone. Photo by Norman Timonera.

Scheduling the chorus singers is finalized. Arrangements are made to rent the instruments that will be needed throughout the season.

Marketing efforts intensify; advertising begins in June and continues throughout the season. New this year, the City will establish a security perimeter around Millennium Park before every event held there, so the Festival wants to make the public aware of the perimeter and the need to allow extra time to enter the park.