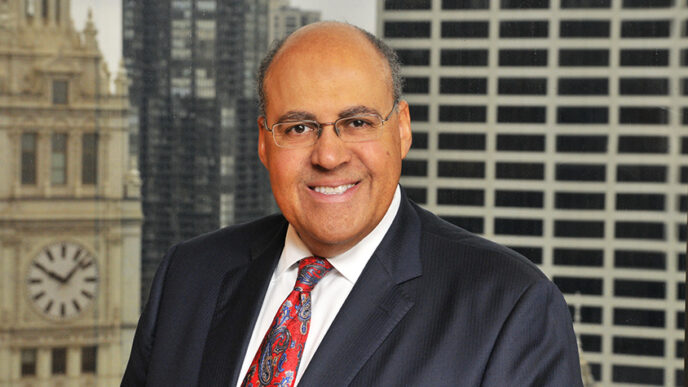 Graham Grady: Making Connections and Giving from the Heart

In celebration of Black Philanthropy Month, the Trust is featuring a series of conversations with Black philanthropists making their impact across the Chicago region. This article is the second in our series—be sure to check back as we profile the impact of generosity in the Chicago region’s Black community throughout the month of August.

Graham Grady is Partner, at Taft, Stettinius & Hollister, LLP and is recognized by The Best Lawyers in American and Illinois Super Lawyers for his work with land use and zoning law. Grady is heavily involved in Taft’s Diversity Equity and Inclusion Committee.

In addition to his legal work, Grady serves as a board member of WTTW/WFMT, Chicago Public Library Foundation, Chicago Parks Foundation, and Sargent Shriver National Center on Poverty Law. He is a member of the Art Institute of Chicago Architecture & Design Committee and the African-American Leadership Advisory Committee. Grady was a founding member of The Chicago Community Trust’s African American Legacy, a philanthropic and educational initiative led by African American civic and community leaders who share the common goal of improving the quality of life among African Americans throughout metropolitan Chicago. He is also a long-standing director and treasurer of the Lloyd A. Fry Foundation.

Grady recently sat down with Charlotte Spaeth, a member of the communications team at the Trust, for a conversation about the way philanthropy has touched his life.

Read excerpts of our conversation with Graham Grady here. Some questions and answers have been edited and condensed for clarity:

Charlotte Spaeth: How would you describe a philanthropist?

Graham Grady: A philanthropist is a person who gives of themselves in, I think, both time and treasure. I tell people the key is to have no expectation of anything in return. I think a lot of people view philanthropy and philanthropists only in terms of the donation of money. But, philanthropy can also involve people giving of their time. And I think that’s an important aspect of philanthropy that often gets overlooked.

CS: Do you consider yourself a philanthropist?

GG: I really don’t. By my definition in my response to the previous question, technically the answer is yes, because I do give time and money. But my financial contributions pale in contrast to what I call real philanthropists.

CS: Why do you give?

GG: I give because there are so many problems in this world and so many people in need. I feel fortunate to be in a position where I can make a contribution.

CS: Tell me about your own philanthropic journey.

GG: My earliest recollection of philanthropy came before I even understood what that word meant. My grandparents were involved in a number of things although they were not wealthy people. And I observed that as a kid, how they gave their time, as well as some money in support of different community activities and non-profits. My parents were also heavily involved in nonprofit and civic volunteer activities.

CS: What causes do you support and why?

GG: I support organizations in a few different categories. The first category that comes to mind is organizations that have been meaningful in my life personally. For example, the summer camp that I went to as a kid where I was both a camper, and then all through high school and college, I was on staff and I did a lot of growing up, or not growing up, there. So, I support things that are personal to me.

I also support some larger organizations that probably don’t need my nickel so to speak, but I do it because I think it’s important that those big institutions continue to have an impact, especially in diverse communities. Some of the bigger majority institutions where I serve on the board, I’m happy to be a part of their DEI initiatives and was active in those spaces before DEI became a trendy thing. I’m like, look, I know that one of the reasons I’m on the board is because I’m a Black guy and so since I’m the Black guy, I’m going to talk about issues that are important to the Black community. Some people at those institutions, staff and board members, are all in. They understand, they get it. They really want to make impact. They want to figure out how their organization can make a positive difference either in terms of their programming, the staff they hire, their spend.

That’s a big area I focus on. Are you using women-owned businesses? Are you using Black and Latino vendors? Are you asking your audit firm and your law firm and the other professional services firms that you use to populate your teams with women and people of color? Because those institutions can have a big impact.

The third category is what I would call Black-led community-based organizations. To me those are grassroots organizations that are having a direct impact in the community. It takes all of those things to improve society and to level the playing field and to provide opportunities for all parts of our society to be able to participate fully.

CS: What message would you share with someone who’s at the beginning of their philanthropic journey?

GG: To be a lot more focused than I was. Pick one thing and really focus on it like a laser. I say that somewhat in jest, but I know I’m a little bit all over the place. So, I would say: figure out what you really care about, make it from the heart, and jump in with both feet.

CS: How do you feel when you give back?

GG: It’s really hard to describe. It just feels so good. For example, years ago I went through this program in Chicago called Leadership Greater Chicago in 1989, it was wonderful. There was a guy that I met there who ran a private equity firm, and at the time I didn’t know what private equity was. He said he wanted to have me over to his office for lunch. He wanted to know my background kind of what makes me tick, and how I got into the program. In our conversation, I asked him about his involvement as well and he mentioned that he and his wife had been big sponsors of the Golden Apple Award Program, which has two pieces.

The Golden Apple Program gives awards to outstanding teachers in the Chicago Metropolitan area and provides a one-year sabbatical to pursue a master’s degree. In addition, they identify young people to encourage them to go into the profession of teaching. Because, at least at that time period, there was sort of a decline of interest in younger people going into education.

So, at this lunch, this gentleman mentioned to me that they’re having a problem with their college scholarship program, as they did not know what to do with the students in the summer. Especially in inner city, underserved neighborhoods. So, I said to him, well one of the most fundamental experiences I had in life was being a camp counselor. The notion was that being a camp counselor is a good, pre-experience to being a teacher because you’re supervising kids, you have to have a lesson plan, you have to organize your day, you have swimming lessons and archery and all that.

Then about a year later, I ran into this guy again. He told me that, as a result of our lunch and my connecting with the YMCA it helped him so him and his wife solve the problem of what to do with these college kids in the summer.

And I mean, I didn’t give any money. I actually didn’t give any time. So maybe it doesn’t count as philanthropy, but it made me feel good to be able to connect the Golden Apple Foundation with the YMCA camps to solve a problem. As a result of this conversation those students had the opportunity to become camp counselors and the YMCA had a ready source of students to work at summer camp.