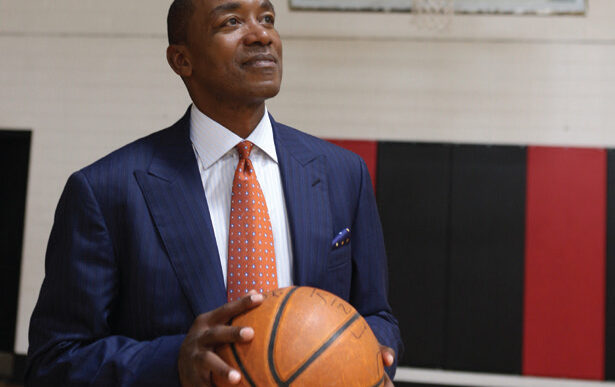 Basketball legend Isiah Thomas is no stranger to defying the odds. Growing up in Chicago’s impoverished West Side, Thomas, as well as his two sisters and six brothers, could have easily fallen prey to the drugs, violence and gangs that plagued his neighborhood. But his fiercely protective mother, Mary Thomas, shielded him from those dangers. She fostered his passion for education and remarkable talent for basketball, setting the stage for him to become a college basketball standout and one of the 50 greatest players in NBA history.

Now Thomas gives back by helping disadvantaged families, particularly youth, beat the odds like he did through his family foundation Mary’s Court, established in honor of his own mother.

Mary’s Court helps families in poverty by funding education, safety, housing and health programs in low-income areas in Chicago and across the United States. While the foundation supports a variety of initiatives to attack poverty from multiple angles, Thomas has a particular fondness for educational programs.

Since it was established in 2010, Mary’s Court has supported several educational projects, including literacy programs such as Reach Out & Read; the school and youth center at St. Sabina Church in Chicago; and scholarship programs at Indiana University, Florida International University and Christ the King Jesuit College Preparatory High School in Chicago.

[pullquote] At the end of the day, my goal is to help and save families, especially kids. I want to make their environment healthy and safe and give them a chance to succeed — Isiah Thomas[/pullquote]

In addition, Thomas supports basketball programs in Chicago that are designed to reduce violence by providing safe places for at-risk teenagers to gather.

He worked with Mayor Rahm Emanuel in 2013 to raise nearly $500,000 to expand Windy City Hoops, a Chicago Park District program that organizes free year-round basketball leagues for teenagers in 10 parks located in low-income neighborhoods across the city. He also works with Father Michael Pfleger of St. Sabina Church created the Peace Basketball Tournament. The annual tournament seeks to curb gang violence in Chicago by bringing together rival gang members willing to put their differences aside to play basketball together.