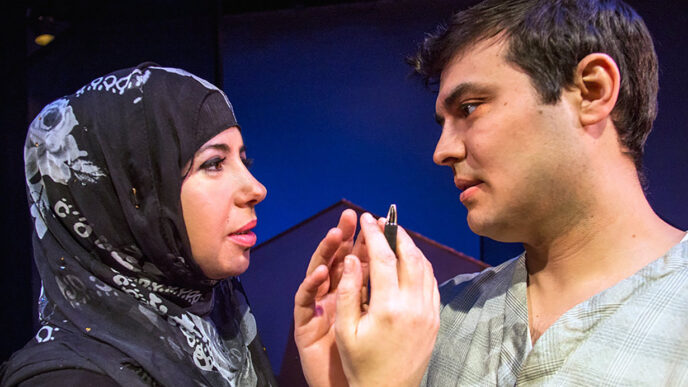 From Our Archives: 10 Images that Capture Chicago’s Arts Scene

Take a quick stroll through Chicago to discover a colorful past of vibrant artistic and cultural heritage. This list of ten outstanding cultural achievements uncovers the story of The Chicago Community Trust’s support for arts and culture. These images from the Trust’s photograph archive have been selected to commemorate the most influential initiatives over the past 60 years that distinguish Chicago as the thriving cultural hub of the Midwest.

1. WTTW/Channel 11. In 1992, photographer Peter Panayiotou captures senior citizens at a shopping mall as part of a segment on the topic of aging for WTTW’s Chicago Matters series “The Third Age.” Chicago’s first educational television station was launched by Edward L. Ryerson Jr., the Trust’s Chairman from 1944 to 1958. As one of the earliest funders of the Chicago Educational Television Association, the Trust’s support made a significant difference to the inception and success of today’s WTTW/Channel 11. Over 50 years later, WTTW is the most watched public television station in the country.

3. Lyric Opera. Mary Lasker Block (left) and her husband Leigh B. Block were passionate supporters of arts and culture. Upon her death in 1981, Mary Block directed half of the income from her fund at the Trust to benefit her favorite institutions: the Lyric Opera and the Rehabilitation Institute of Chicago. Through such donors, the Trust has been a longtime supporter of major cultural arts institutions such as the Lyric Opera, which regularly stages some of the world’s greatest musical productions.

4. Millennium Park. The Trust has provided major support to all three of Chicago’s Cultural Plans, starting with the first in 1964, and those which followed in 1986 and 2011. What is Millennium Park today was first conceived by Mayor Richard M. Daley, who intended to transform this expansive area into an inviting public space for all Chicago residents. In 1999, the Searle Funds at the Trust supported the development of Lakefront Gardens/Millennium Park over a five-year time span through a $1 million dollar grant. Originally, the plan envisioned a 16-acre park and music venue in the Beaux Arts style of Grant Park; but later, the project expanded to include the visions of renowned architect Frank Gehry, landscape designers and planners.

5. Joan W. and Irving B. Harris Theater for Music and Dance. In the late 1980s, the Trust developed the idea for a centrally located, mid-sized theater for the performing arts. Executive Director Bruce Newman and Senior Staff Associate Sarah Solotaroff began a 12-year collaborative initiative with fellow Chicago funders called the Chicago Music and Dance Theater. Joan W. and Irving B. Harris provided the capstone funding for The Harris Theater for Music and Dance, which opened in 2004. Today, it provides a venue for some of Chicago’s most thrilling music and dance companies, such as Music of the Baroque, Chicago Opera Theatre, and Hubbard Street Dance Chicago. This photo from the Trust’s archives shows Katherine P. “Kassie” Davis, a volunteer with Hubbard Street Dance Company Dancers in 1985 and later a member of the Trust staff.

7. Chicago Dramatists. Chicago Dramatists offers playwriting workshops to young writers in the Chicago Public Schools. A participant in the Trust’s SMART Growth Initiative from 2007 to 2009, Chicago Dramatists nurtures playwrights and develops new plays like 2015’s ‘Mecca Tales,’ pictured above. The Trust awards $1 million per year through its SMART Growth initiative to build the resilience and capacity of small cultural organizations that are deeply rooted in and reflective of underrepresented communities, populations and artistic genres.

8. Ballet Folklorico. The Back of the Yards Neighborhood Council’s Ballet Folklorico provides classes for children and teenagers in traditional Mexican folk dance. The Trust’s Nuestro Futuro affiliate promotes collective philanthropy among Latinos in Chicago. Since 2006, it has awarded more than $1.1 million in grants to support and enrich the quality of life in Chicago’s Latino communities—from early childhood education programs to cultural institutions.

9. Hooked on Drums. The Springboard Foundation was created in 1998 as a supporting organization of the Trust to bolster grassroots out-of-school programs in Chicago’s most underserved neighborhoods. Hooked on Drums, a Springboard grant recipient, provides African drumming classes to motivate and inspire young people with new possibilities.

10. The National Museum of Mexican Art. The nation’s largest Latino art institution is located in Chicago’s Pilsen neighborhood. Since its opening in 1982, and with support from the Trust, the National Museum of Mexican Art has tripled the size of its facilities, created the youth initiative Yollocalli Arts Reach and launched the radio station Radio Arte. Pictured here is Helen Valdezi, who with her husband Carlos Tortolero founded the museum.