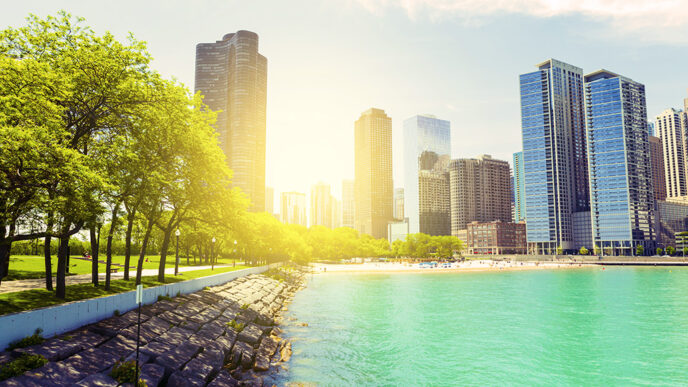 From Matchmaking to Magic: Financial Professionals Help Make the Connection between Philanthropy and Impact

Growing up in rural Kentucky on his family’s farm, Mike Hobbs recalls that he and his eight brothers and sisters each had to put their quarter in the church collection basket on Sunday mornings. That lesson stuck: As an adult, Hobbs moved to Chicago, became a successful entrepreneur, and grew his giving alongside his business. Now retired, Hobbs has both time and money to give–and he does so in part through a donor advised fund that he set up at the Trust in 2012 with the help of his estate attorney, Kevin Noonan, principal, Much Shelist law firm.

“My role is to do the matchmaking between my clients and the Trust, and maybe draft an agreement or two–and then I get out of the way and let the magic happen,” said Noonan. “I’m happy to have this small part to play, but at the end of the day, it is Mike’s money that’s going out and doing good in the world, and it’s the Trust’s infrastructure that allows his dollars to go to work.”

Hobbs directs his funds to a number of local and global organizations that provide education, community development, and jobs in disinvested areas. While running his business, which manufactured tempered glass for ovens and automobiles, he began supporting neighborhood groups in Back of the Yards, as well as initiatives led by his church, Old St. Pat’s in Chicago’s West Loop. As his company’s worth grew, he expanded his circle of giving to include investments made by Old St. Pat’s sister church in nearby North Lawndale, and a nonprofit in India that provides education, food, and shelter to families.

Since retiring, Hobbs has mentored burgeoning Chicago businesses through the Trust’s Neighborhood Entrepreneurship Lab. Hobbs said he enjoys the role–and chose to support NEL financially, as well–not only because it allows him to share his business acumen, but because it helped him further focus his philanthropy.

“Growing up, I was taught that if you become successful, you have to take some people along with you. I got an education coming off the farm, and it made a huge difference for me. I was able to take a small $7 million company and grow it into a $50 million company–and that was fun,” said Hobbs. “Now that I’m retired, I’m still in my home office quite a bit, but it’s not work to me. I’m focused on my philanthropy, on the things I’m really passionate about–where I think I can contribute the most.”

Noonan and Hobbs’ relationship goes back more than a decade, when Hobbs interviewed a number of estate attorney candidates, and chose Noonan for his personal approach. “I thought, here’s a guy who can sit down and have a conversation with me–it wasn’t corporation to corporation, it was more personal,” said Hobbs. “Kevin recommended the Trust to me once I started looking into a donor advised fund. He took the time to explain it and lay out the pros and cons so I could make an informed decision. I still confer with him as I’m thinking about adding to the fund, and he always goes through the trouble to give me more than one perspective.”

Noonan first learned about the Trust from one of his colleagues when he was just starting out and participated in the Trust’s Young Professional Advisory Committee.

“Whether they have $10,000 to give or $1 million, there’s no place better than the Trust to find out what those options are. The team at the Trust has their finger on the pulse of the Chicago charitable community unlike any other,” said Noonan. “Their knowledge, both in terms of receiving contributions as well as grant making, is unrivaled. But probably even more than that is their level of client service.”

Noonan added that, while not every client has the same passion for philanthropy as Hobbs does, most want to know the impact their giving has made. He’s confident that the Trust can provide his clients with not only the avenue but also the outcomes for their charitable giving.

As Hobbs’ knowledge and experience as a philanthropist grows, he’s passing along those lessons to his children and their children.

“For the first time, I went to my four sons last October and said, ‘I will put up $250 for each of your kids to give to any charity they want. But they have to put up some money,’” said Hobbs. “At Christmas we had each grandkid, from age 7 to 17, talk about what charity they chose, and why, and they picked everything from animal welfare to breast cancer. It was awesome, and we’ll do the same thing again this year. To me, the most important thing is for them to know that you have to get involved in something besides yourself,” he said.