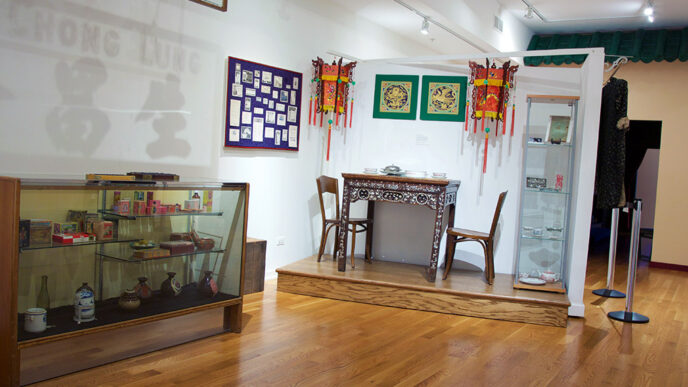 In 2005, the Chinese-American Museum of Chicago (CAMOC) opened its doors in the heart of Chinatown. The Museum curated exhibitions and events celebrating Chinese-American culture in the Midwest—but just three years later, a devastating fire swept through the museum, destroying much of its collection.

Through the support of community members and other cultural centers, CAMOC reopened in 2010. Today it’s the largest organization in our region dedicated to Chinese-American culture, and a major attraction drawing visitors to Chicago’s vibrant and growing Chinatown.

The two museums took their first steps toward partnership while the History Museum was preparing an exhibit titled My Chinatown. Curators reached out to CAMOC for photographs that told the neighborhood’s story.

The resulting multimedia experience included photos and artifacts, as well as videos and oral histories that brought the history to life. Visitors were immersed in Chinese-American life in Chicago—from food and medicine, to family and business associations, to traditional celebrations.

“It had always been our wild hope that there would be some way that the exhibit could travel,” said Gary Johnson, president of the Chicago History Museum. “But no one exactly knew how to make that happen.”

“What actually made our dream come true was knowing that The Chicago Community Trust had an initiative that was designed to link communities.”

The Trust’s Artistic and Cultural Diversity initiative was created to support projects that pair small, diverse neighborhood arts organizations with larger, established cultural institutions—helping each expand its audience and gain new perspective. One such grant made it possible to transfer My Chinatown to the Chinese-American Museum of Chicago in spring 2012.

To fit the much smaller space, the exhibit needs to be reconfigured and compressed. And because this would be CAMOC’s first-ever multimedia experience, the History Museum guided the construction of their new theater and provided audio/visual equipment.

“From the get-go, it was a close collaboration to design the hardware and the software,” said CAMOC executive director Anita Luk. “Everything started from scratch, with the help of the History Museum. We had a team to work on the grants, and then we had an exhibition team to work together.”

My Chinatown has proved hugely successful in attracting new visitors, deepening their understanding of Chinese culture. While CAMOC traditionally welcomes about 6,000 visitors a year, My Chinatown’s opening night saw 400 visitors. That month the museum broke its attendance records, bringing in over 1,000 visitors in April alone.

For the Chicago History Museum, the experience served as a rewarding model of community partnership.