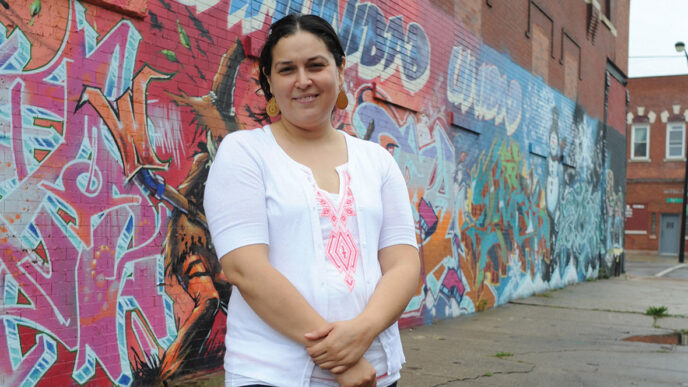 From Immigrant Workers to Entrepreneurs, Thanks to Ana Guajardo

As executive director and co-founder of Centro de Trabajadores Unidos: Immigrant Workers Project, a nonprofit that fights for immigrant workers’ rights on Chicago’s Southeast Side, Ana Guajardo always wanted to start a business cooperative, but she never had the resources to do so. That is until she became a fellow in The Chicago Community Trust Fellowship from 2013 to 2014. She used some of the $30,000 she received from the fellowship to expand CTU’s scope of work to create business cooperatives and social enterprises that provide jobs and ultimately businesses for immigrants on the Southeast Side.

Funds from the fellowship allowed Guajardo to travel to Mexico to see cooperatives in action. Unlike investor-owned businesses, cooperatives are business entities owned and managed by its members, who pool their resources together, democratically make decisions and share in the profits. A cooperative organizer took her to see successful ventures throughout the country that ranged in size from just five owner-workers to ones with members in the millions. She came away with an understanding of how to teach members new skills that could eventually lead to small business entrepreneurship as well as how to leverage the power of partnerships.

“My first thought was to start a tortilla-making cooperative,” Guajardo says. “But when I returned to CTU and sat down with our community, a group of women told me they really wanted to learn to cut and sew. So we started with that.”

Volunteers began training the women in August 2014. Soon after, the Illinois Coalition for Immigrant and Refugee Rights asked the group to make 500 vests for its volunteers working a voter drive in a month. The cooperative kicked into high gear. The women and the volunteers met three to four times a week at each other’s homes, sewing four to eight hours a day. “Everything moved so fast, and we weren’t quite ready for this,” Guajardo says. “But we wound up learning as we went along.”

The sewing cooperative will now invest the money it earned to buy industrial sewing machines. In addition, Guajardo will hand over more of the leadership and operational duties, such as purchasing supplies and creating a work schedule, to the co-op owners.

As part of that effort, CTU is partnering with St. Augustine College to hold sewing and business training sessions for the cooperative members and others in the community interested in starting or joining a cooperative. Guajardo will also bring in the consultant she met in Mexico to help her plan more co-ops and develop training strategies.

“We’re already starting to get phone calls from community residents who are interested in working at these co-ops,” Guajardo says. “The word is spreading. People are eager to learn new skills.”

Guajardo also plans to work with the consultant to develop social enterprises, businesses that deliver positive social change in the community. CTU intends to bring together leaders of the sewing co-op as well as trusted community and business leaders to create social enterprises that employ immigrants to produce and sell tortillas, salsas and jams.

“I’ve learned so much thanks to the Trust fellowship,” Guajardo says. “The ability to travel and be exposed to organizations and individuals that inspire and teach me how to better help people in Chicago has been invaluable. We didn’t have the resources to do any of this on our own. It’s been an amazing opportunity.”