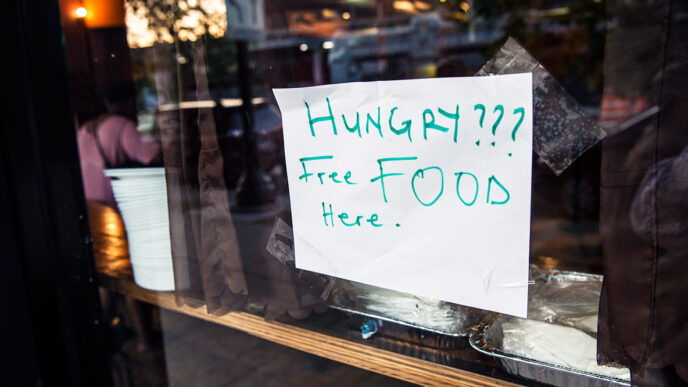 From Homeless Families to Aldermen, an Uptown Community Dinner Where Everyone is Welcome

Outside the restaurant, a magnet for the area’s Nigerian community, one of Emmanuel Abidemi’s daughters taped handwritten signs onto the front windows.

It was a meaningful invitation; there are 7 homeless shelters within 5 blocks of Abidemi’s restaurant.

On May 16, Iyanze opened its doors for a candid conversation about local needs in its Uptown community. With 7 homeless shelters within 5 blocks, the restaurant provided free food to ensure that all its neighbors were welcomed to the table.

Abidemi was serious about welcoming all his neighbors to the On the Table conversation he hosted—like 46th Ward Alderman James Cappleman, Evan Cauble-Johnson of Inspiration Corporation, and community residents whom they serve.

With West African music playing and a huge fan battling the evening’s unseasonable heat, the group dug into dinner and their concerns.

At the top of the list: housing. Denise Olaoye told the group that she once spent two years living with her three children, illegally, in a room at the top of a nearby building’s elevator shaft.

“But I kept my family together,” she said proudly. Even from that elevator shaft, her children went to Senn High School, then Truman College.

“What people do to survive,” Alderman Cappleman said quietly.

“You wouldn’t believe what people sleep in,” said Olaoye, who now lives in Albany Park with her rent subsidized by the city’s Low-Income Housing Trust Fund.

Denise Olaoye moved from Chicago’s South Side to Uptown because of the many social service organizations in the area. Olaoye shared her family’s story of living for years in a room at the top of an elevator shaft—and how she leveraged support services to provide her three children with the stability to succeed in school.

Cappleman would believe it. Homelessness, and the desperate need for affordable housing in his ward, are his concerns and his frustrations. There aren’t enough affordable units, Cappleman explained. And there is so much demand for the money in the trust fund—which can be given under different guidelines to both low-income people and those with virtually no income—that money to help one group comes at the expense of the other.

From her seat next to Cappleman, Dorothy Bowser, a volunteer affordable housing activist with ONE Northside, asked, “What are we doing to incentivize developers [to build affordable units] on the South and West Sides?” Good affordable housing would be a point of pride for people living there, she said, and would take pressure off Uptown.

Bowser is dismayed at the arrival of a new 197-unit high-rise at Wilson Avenue and Broadway. “I think it’s pretty upsetting to see luxury apartments going up when a lot of people are trying to just get by,” she said. “I don’t think everyone wants or needs granite countertops.”

But asking developers to set aside affordable units is a battle, said Cauble-Johnson. Many are willing to pay a penalty in exchange for being able to charge years’ worth of market-rate rent on a unit.

“You’re asking them to basically make a philanthropic act, and take a financial hit,” Cauble-Johnson said.

The talk turned to Uptown’s bounty of social services. “This is a community that is very compassionate; we lead the way,” Cappleman said. “But what we’ve found is the that a lot of people come here for the services.”

That’s what Olaoye did. “I prefer to live on the South Side around my people,” she said. “I’m far away from my family.” But the help she needs is here. She wishes social services were more available on the South and West Sides.

Cappleman wishes people could feel safer in those neighborhoods. Residents there are moving to Uptown or sending their children to school here, he said, because they perceive it as being safer. He appreciates the compliment to Uptown and welcomes students, but thinks the city needs to resolve the underlying problem.

Dorothy Bowser, a volunteer affordable housing activist with ONE Northside, identified a mismatch between the incentives for real estate developers, and the needs of residents—not only in Uptown but in neighborhoods across the city. “I think it’s pretty upsetting to see luxury apartments going up when a lot of people are trying to just get by,” she said.

More diners walked into the restaurant, and quickly joined the conversation. “Hey, Willie!” Evan Cauble-Johnson called out to Willie Watson, Jr., an acquaintance from the Inspiration Cafe. The Cafe provides restaurant-style meals to homeless and low-income men, women and families in a therapeutic community that promotes dignity and respect. Once a patron of the cafe, today Watson serves as its cafe coordinator and an Inspiration Corporation board member.

Watson shared his worries about gentrification. “The wealthy are pushing the lower-income people out,” he said. Among the newer residents, he said, are people making more than $200,000 a year who keep their houses in the suburbs and buy an Uptown condo as a pied-a-terre.

“I lived in New York City for 40 years; I know that game. That’s happening here,” he warned.

Since emigrating from Nigeria more than 20 years ago, Emmanuel Abidemi has created a hub for Chicago’s West African community. But this sense of unity was shaken when two men were shot in the restaurant on New Year’s Day—the city’s first homicides of the year. Abidemi committed to inviting the community together on a monthly basis to create change. “The most important thing is that we come up with answers,” he says.

Restaurant owner Abidemi, who emigrated from Nigeria in 1995, shared his own concern for the neighborhood: gun violence.

The issue is personal. Two men were shot dead inside Iyanze Restaurant on New Year’s Day—the city’s first homicides of the year.

There are things people don’t see from the outside, Abidemi said. “The neighborhood has been split between gangs,” he said. “There are kids who can’t go certain places.”

He would like to see residents reclaim gang-dominated areas by staying outside in them. “They’re only able to take it because we aren’t there.”

For four years, On the Table has encouraged residents across the region to come together over shared meals and honest conversation. This year, on May 16, more than 100,000 people joined in On the Table, taking the first steps toward new civic bonds and a more unified Chicago.

Abidemi says he sees the May evening as just the beginning. He intends to continue hosting On the Table-style dinner and community conversations at Iyanze once a month. “We really hope you join us,” he told his guests.

“The most important thing is that we come up with answers.”