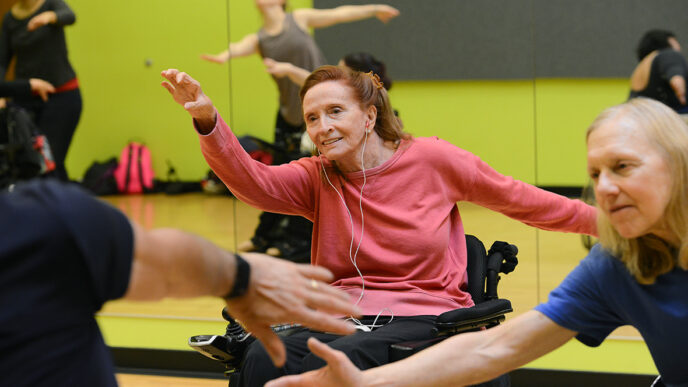 For People with Spinal Injuries, Dance Sparks Creativity and Community

In a small studio on the third floor of the Old Town School of Folk Music’s Szold Hall, fourteen people sat in a circle. One by one they went around the room, each saying their name and improvising a small movement with their arms or legs.

Each person repeated the names and gestures of those who preceded them, before adding on their own, in an accumulating choreography. By the end the whole circle was dancing in unison, while gently intoning the names of everyone attending the afternoon’s workshop, hosted by Backbones—a nonprofit established in 2009 to help people with spinal cord injuries or disease [SCI/D] connect with their communities and find peer support once the immediate trauma and rehab associated with their condition had passed.

Among the 64 winners of the Trust’s Acting Up awards was a dance workshop for people with spinal cord injury or disease. Created by Backbones and led by artists from EveryBody Can Dance, the resulting workshop was so successful that they were asked to host a second in April.

“I kept hearing people say the same thing,” says Backbones founder Reveca Torres. People with SCI/D “had a lot of support when they were in the hospital and rehab but once you go home and you don’t have doctors and therapists and patients around you, it’s hard. That resonated with me. I had felt that way too.”

Torres was 13 when, on vacation in Mexico, her family suffered a car collision. Her parents and three of her siblings were injured, though none critically. Torres broke her neck and lower back, and was paralyzed from the chest down.

“I was just about to start high school and that’s a hard time for any teen to go through,” she says. “I was trying to figure out what was going on with my body and learning to do daily activities—how to dress myself and brush my teeth and just the basics.” Most people with spinal cord injury are men between 18 and 35, she adds. “There aren’t a lot of women who are injured and they are hard to find.”

Backbones founder Reveca Torres, left, got the idea to create adaptive dance workshops for people with spinal cord injuries and disease during a harmonica lesson. Torres started her organization after being paralyzed at age 13 and finding few resources for young women with similar injuries.

Backbones started out offering one-on-one peer support, matching up people with similar injuries, ages and backgrounds. Over time, though, the organization has started staging low-key social events like wine tastings and 5Ks.

The idea for the dance workshop came about after Torres took a harmonica class at the Old Town School—harmonica helps with her breathing, which was impaired by her injury. She and the instructor started talking about adaptive dance and its possibilities for people with SCI/D. When she saw an announcement for the Acting Up Awards, Torres “applied right away, because it seemed such a good fit.”

Her proposal was selected as one of 64 projects to receive Acting Up Awards. With that $1,000, the first Backbones workshop came to life at the Old Town School in November.

The adaptive dance workshops welcomed both people who use wheelchairs, and people who do not; extra wheelchairs were provided for those who wanted to experience dance this way.

The April 22 session was led, like the first, by instructors Deb Goodman and Kris Lenzo of EveryBody Can Dance, an integrative movement workshop that’s a key part of the programming at Oak Park’s Momenta Dance.

Seven of the fourteen in the circle were in wheelchairs, including Lenzo, whose legs were crushed in an industrial accident more than 30 years ago. A wheelchair athlete, he started dancing in 2003 after he was invited to participate in a dance project at Momenta, where his daughter was a student. He’s been performing and teaching ever since, and was a 3Arts Award winner in 2015.

Lenzo and Goodman, who does not have a disability, led the group through a series of exercises, starting with a warm-up called “The Brain Dance,” a movement sequence designed by Loyola instructor and former Hubbard Street dancer Sarah Cullen Fuller as a therapy for Parkinson’s patients.

Instructor Kris Lenzo, left, was a wheelchair athlete for years before taking part in his first dance project, at age 43. “Everyone’s an artist,” Lenzo says. “And everyone is a dancer.”

“Breathe in when you get tiny; breathe out when you get big,” Goodman directed, as fourteen torsos expanded and contracted in unison. “It turns out to be emotionally grounding to just move your upper body and not your lower,” she added as an aside.

As a group, they moved on to shoulder rolls, arm circles and isolations familiar to any dancer or gymnast, before breaking formation to spin around and hop in their chairs. Extra wheelchairs were provided for able-bodied dancers who wanted to experience the possibilities of wheeled movement.

At the start of a “shadowing” dance, in which dancers paired off—one leading, one following behind, mimicking her movements—a dancer asked her partner, “How are you with leg movements?”

“I can move my right leg but not the other,” replied the other, whose motorized chair was hung with colorful totes and bags.

“OK well, just do what’s available to you!” said the first—and they set off across the crowded floor, where dancers in wheelchairs spun and arced around each other in graceful chaos.

Of the fourteen dancers attending the workshop, seven use wheelchairs. Partner exercises paired participants up to move across the floor, echoing or complementing one another’s movements.

Vincenzo Tufano, who is 30 and has used a wheelchair since 2010, came out to the first workshop in November and immediately became a convert. Since then he’s performed with Momenta, and is working on a solo piece for July’s annual Disability Pride celebration, not to mention training for the Chicago triathlon.

Tufano wasn’t participating in this workshop because he’d just had hand surgery, but came out to show his support. It’s important, he says emphatically, to show the world that “someone in a chair is just as active and talented as anyone else.”

Tobi Heekin, who lives in Winnetka, broke her C6 vertebra in a car accident seven years ago. She now uses a motorized wheelchair and adaptive technologies for her hands, which have limited mobility. “When something like this happens,” she says, “you become a completely different person, both on the outside and on the inside.”

For years after her injury, Heekin didn’t want to leave the house. She dreaded even going to the grocery store, where she might run into old friends who didn’t know what to say or how to treat her. But over time, she says, she’s found that forcing herself outside her comfort zone has been effective therapy.

For years, Tobi Heeken (right) dreaded leaving the house after being injured in a car accident. As part of expanding beyond her comfort zone, Heeken attended the first Backbones workshop last fall—and returned for the second in April. “I found it very liberating,” she says.

“I did this workshop last fall and I found it very liberating,” she says. “I find putting myself in awkward situations makes my awkwardness easier to manage.” And of course, she adds, “It’s a chance to meet people.”

Kris Lenzo remembers Tobi at the first workshop. “She said, ‘Being in this class, I feel like I advanced in that goal of being comfortable in my own skin.’ If I taught 100 classes and that happened just one time, it would be worth it.”

“Everyone’s an artist,” he adds. “And everyone is a dancer.”