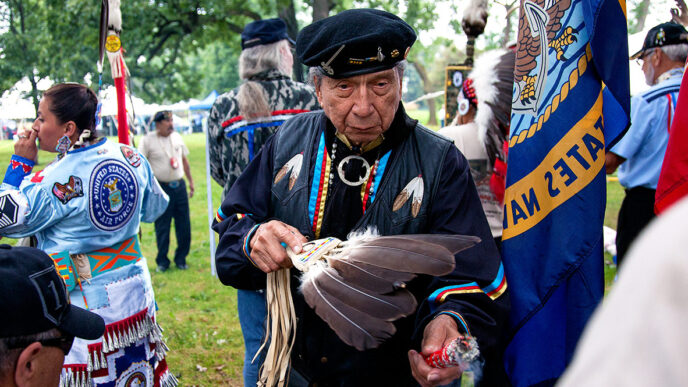 On a rainy August Saturday in Wheaton’s Cantigny Park, an impressive color guard with 18 Eagle Staffs—the representation of a tribe’s military achievements and honor—led the grand entry of all veterans at the first-ever National Gathering of Native American Veterans.

This Welcoming of the Veterans Ceremony officially kicked off a weekend of unprecedented recognition and sharing for Native American vets. The event’s organizer, Trickster Gallery CEO Joe Podlasek, is a long-time community leader and a tireless advocate of renewed focus on Native stories and perspectives.

Podlasek sees an urgent need for public recognition of Native American vets. “Native people are not really recognized [for their service] outside of the Navajo code talkers, which were critical in our history—but there were six other languages used in the military.”

Many of the gathering’s participants also mentioned the historic lack of public recognition for the efforts of Native vets. VIP attendee Saginaw Grant, USMC Korean War veteran and member of the Sac-n-Fox, Iowa and Otoe-Missouria Nations, described the event as “a step in the right direction. The history of Natives in the military isn’t recognized as it should be.”

The first-ever National Gathering of Native American Veterans recognized the U.S. military valor of Native people—a tradition of service dating back to the American Revolution.

According to VIP attendee Charles Shay, elder of Maine’s Penobscot tribe and Army World War II and Korean War veteran who received the Bronze Star, Silver Star and Legion d’Honneur, the Native history in the U.S. military began “during the Revolutionary War. Chief Oreno [Shay’s Penobscot ancestor] went to Bunker Hill and offered General Washington the support of his warriors from his tribe.”

Since that time, Native Americans have had the highest per capita military service rate among any ethnic group, at 22% of the population, serving in every U.S. conflict, beginning formally as the Army Indian Scouts in 1866 and continuing through the present in every branch of our military.

Generations of family from a range of tribes gathered for the landmark event. As one elder reflected after a morning thunderstorm, “We danced with Mother Nature as she washed away some of the negative things in [veterans’] lives.”

Support from sponsor Robert R. McCormick Foundation, which provided the Cantigny location as well as a planning grant for the event, “was hugely important. [This] came together through a strategic process that years of work went into. You hope other foundations will follow that lead, and we were very fortunate to more than triple that amount through other event sponsors.”

Through the efforts of Podlasek and those sponsors, the weekend unfolded into a milestone that Mohegan tribal chairman and retired Army Colonel Kevin Brown described as “the first time for our Mohegan Nation to actually connect with other nations about veterans’ issues. I was hoping to see here a recognition of how our Native culture can help [veterans] with their healing process. We are a distinctive and different folk [with] a culture that’s supposed to purposefully exist to help people heal.”

Native Americans have had the highest per capita military service rate among any ethnic group and served in every U.S. conflict, beginning formally as the Army Indian Scouts in 1866 and continuing through the present in every branch of our military.

This event seems to have begun a healing process for many of its attendees, both veterans and their families. A member of the Mohegan tribe, James Gilman, related a story from the weekend: “A Shenandoah woman was sitting side by side with [another] person, and they said ‘We wouldn’t have done this’ because their two tribes were [historically] killing each other. They grabbed a knife, put it down, shook hands and gave each other a hug. We came here to meet other Nations, other families.”

Charles Norman Shay (left), a combat medic during WWII and the Korean War, was a leading advocate for the creation of Native American Heritage Day, now celebrated on the day after Thanksgiving. Beside him stands Saginaw Grant, an actor, dancer and motivational speaker of the Sac-n-Fox tribe who served in the Marine Corps during the Korean War.

As the weekend came to a close, that sense of community and healing among the veterans was summed up by an elder who, in Podlasek’s retelling, considered the thundershower at the events beginning “a gift from the creator as a cleansing rain. It waited with the thunder and lightning to allow our Welcoming of the Veterans Ceremony, then gently cleansed the veterans.”

“We danced with Mother Nature as she washed away some of the negative things in their lives, and gave this event a solid foundation for years to come.”