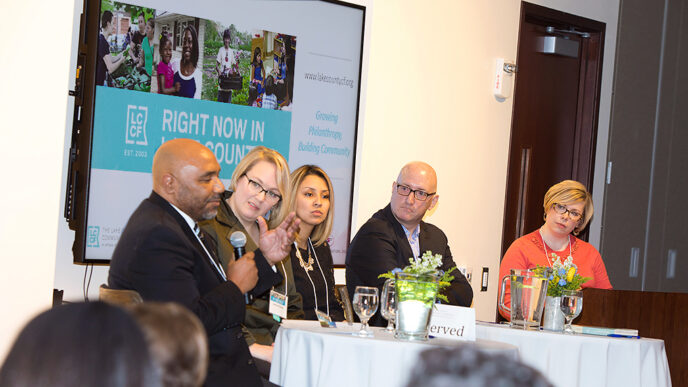 For Lake County, a Reckoning with the Suburbanization of Poverty

“Concentrated poverty, which we think of as an urban problem, is taking root in suburban municipalities across the nation.”

On January 23, Dr. Scott W. Allard, a professor at the University of Washington’s Evans School of Public Policy and Governance, addressed a standing-room only crowd at Northwestern Lake Forest Hospital to explore the economic realities of Lake County.

Convened by The Lake County Community Foundation, the event was designed to provide government officials, civic leaders and philanthropists with an in-depth look at how socioeconomic trends are affecting local families—and how communities can respond.

While poverty is often framed as an urban problem, there are approximately 4 million more poor people living in suburban municipalities than in the cities they adjoin. Dr. Scott W. Allard’s research shows that “cities are getting poorer too”—but at a slower rate than American suburbs.

Research into the suburbanization of poverty first brought Dr. Allard to Lake County in 2008, for a study for the Brookings Institution. Now, ten years later, he shared up-to-date insights from his book Places in Need: The Changing Geography of Poverty, which examines data from the 100 largest metropolitan areas across the United States to challenge our conventional thinking about poverty.

Traditionally, poverty in metropolitan regions has been concentrated within the inner city. But although we still think and talk about it as an urban phenomenon, as of 2014, approximately 4 million more poor people are living in suburban municipalities than in the cities they adjoin.

As Dr. Allard pointed out, this shift is not a result of declining urban poverty. “Cities are getting poorer too”—but the poverty rate has grown faster in the suburbs. Each of the metropolitan areas had reached a “tipping point,” where suburban poverty exceeded urban poverty for the first time, within the past fifteen years.

Although some low-income residents have migrated from cities to suburbs, that trend has not been a driver of increased suburban poverty. Rather, we largely see “people becoming poor in place.” As changes in the labor market have flattened wages and decreased economic opportunity, suburban residents have been pushed below the poverty line.

Research into the suburbanization of poverty first brought Dr. Allard to Lake County in 2008. He returned on January 23 for an event convened by The Lake County Community Foundation, to share insights from his recent book Places in Need: The Changing Geography of Poverty.

The conventional framing of poverty as a strictly urban problem isn’t just obsolete, Dr. Allard warned, but it also has harmful consequences. Reinforcing biased understandings of who is poor promotes the idea that poverty is a problem for other people and other places—and therefore, is the responsibility of others to address.

And for suburban communities, failing to recognize the need that local families face fosters a belief that safety net programs only benefit people “somewhere else,” undermining popular support and thus putting these essential services at risk.

This persistent “othering” of the poor only adds to an inconsistent service landscape, where suburban residents already face a lack of support. While federally funded and regulated assistance programs respond to poverty no matter where it occurs, human services provided by local governments and nonprofit providers vary widely from place to place. Cities spend an average of eight to ten times as much per person on human services as suburban municipalities. And as nonprofit providers within a suburban context may need to serve multiple, fragmented communities separated by great distances, the dollars that are available often don’t go as far.

Cities spend eight to ten times as much per person on human services as suburban municipalities. And as nonprofit providers within a suburban context may need to serve multiple, fragmented communities separated by great distances, the dollars that are available often don’t go as far.

Still, Dr. Allard said, “I’m optimistic that we can do better.” He credited The Lake County Community Foundation for leveraging local philanthropy, supporting nonprofits that provide essential lifelines to vulnerable families, and raising awareness of local needs. The Foundation hosted public programs in 2013 and 2014 that featured Allard as a speaker, helping to educate concerned residents about the county’s emerging trends; they have also mindfully built on his work to inform their strategic approach as a grant maker and community leader.

“Conversations like this are important because they can help us challenge stereotypes about poverty and its causes,” Allard said.

What can we do?

According to Dr. Scott Allard, professor at the University of Washington’s Evans School of Public Policy and Governance, suburban poverty is prevalent and growing, challenging the available safety net resources. But there are pathways ahead. Here are his recommendations for communities to make an impact.

Following the presentation, Maggie Morales, the Foundation’s manager of community engagement, moderated a panel discussion where Dr. Allard was joined by “three of our phenomenal partners whose work intersects to address our most basic needs.”

For all four panelists, there is one essential component of a successful, thriving human services landscape: cultivating leaders who reflect the population they serve. Jael Mejia of Mano a Mano Family Resource Center described her organization’s commitment to maintaining a 100% bilingual and bicultural staff. “This allows them not just to connect with our Latino clients, but to really understand the challenges they face,” Mejia said.

Brenda O’Connell of the Lake County Community Development Division explained how the County undertook a complete, data-driven transformation of its homelessness services system. Coordinating the processes of multiple supportive housing providers has resulted in a system that’s easier for vulnerable residents to navigate—and, in turn, reduced the county’s chronically homeless population by half. Throughout the process, O’Connell says, they continue a concerted effort to make sure that people with lived experience of homelessness have input into the systems that serve them.

Sean Collins of the Lake County Health Department described how the agency has shifted from a responsive approach to a proactive partnership with vulnerable communities that encourages them in building good health conditions: an approach he described as “upstream thinking.” But this kind of partnership depends on building “warm bridges of invitation,” in an atmosphere of mutual trust—and having leadership that’s rooted in the communities it serves is “vital to build that trust.”

Sharing a national perspective, Dr. Allard cited a need for leadership development programs which cultivate more diverse leaders. Despite widespread agreement that such programs are essential, they struggle to find sustained funding. “The ROI is huge,” Dr. Allard said. “If you can train the next generation of executive directors, that’s going to lead to so many gains down the road.”

Lake County Board Chairman Aaron Lawlor, left, read an official proclamation commemorating the event’s January 23rd date as Lake County Poverty Awareness Day. Foundation executive director Miah Armour, center, encouraged the audience to “go out, and talk about it, and use this as a platform to raise awareness. There are poverty problems in Lake County—even when they’re hidden from view.”

At the event’s conclusion, the Foundation committed to sustaining the momentum by declaring January 23 as Lake County Poverty Awareness Day. While Lake County Board Chairman Aaron Lawlor read from an official proclamation, the Foundation’s executive director, Miah Armour, welcomed mayors, city managers and community from all across Lake County to the stage, to jointly declare their commitment to this civic occasion.

As Armour explained, “We want this to be a rallying cry.”

“Go out, and talk about it, and use this as a platform to raise awareness. There are poverty problems in Lake County—even when they’re hidden from view.”