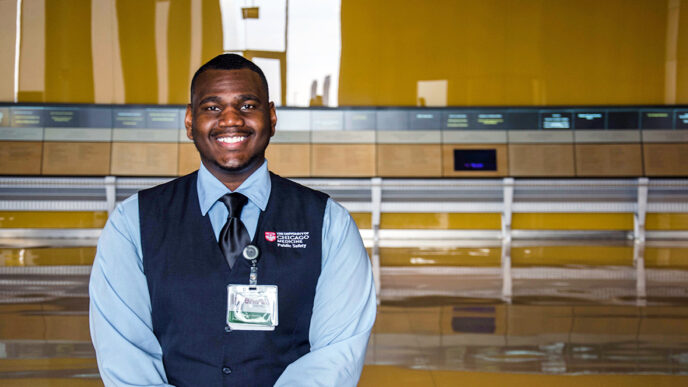 For Job Seekers, an Advocate Helps Close the “Access Gap”

Charles Gentry has always had a passion for helping people and working hard. Working in the security industry has allowed him to pursue both of those passions simultaneously.

Since graduating from high school in 2010, Gentry has worked at several major companies as a security guard on a contractual basis. Earlier this year, Gentry learned that his regional manager planned a visit to his work site to speak with several employees about potential promotions.

After anxiously awaiting the manager’s visit, the big news turned out to be a very nominal increase in pay.

“That’s when I knew it was time for me to find something more stable that was going to provide me with better opportunities to apply my skills,” says Gentry. “I was working part-time, making minimum wage and living paycheck to paycheck. It was a very difficult time for me and my daughter.”

His six-year-old daughter has a love for dance and wants to be a ballerina when she grows up.

“It killed me to not have the means to enroll her in dance classes,” says Gentry.

He began scanning job search sites, where he stumbled upon an ad for Skills for Chicagoland’s Future.

Skills tackles unemployment and underemployment in a different way than most other workforce development organizations. It takes a “demand-driven” approach that starts by working with employers to identify their hiring needs. Employers commit to sourcing a certain number of new hires through Skills, and Skills then places qualified unemployed and underemployed candidates into available positions.

“Every job seeker faces their own set of challenges, but the stigma of unemployment can keep anyone’s resume from the top of the list. What these people need is an advocate,” says Marie Trzupek Lynch, founding president and CEO of Skills.

“A majority of the under- and unemployed job seekers that we see lack the network it takes to get a job. At Skills we call that the access gap.”

For years Charles Gentry lived paycheck to paycheck as a contract security guard, supporting his family on a minimum wage. Then the nonprofit Skills for Chicagoland’s Future helped him leap forward from underemployment to the challenges and rewards of a full-time position.

Gentry had never worked with a nonprofit group like Skills before, but he was eager to find a new opportunity, so he gave it a shot. When Shashu Harris, a member of the talent acquisition team at Skills, reviewed Gentry’s resume, she noticed that he met the requirements for a position at the University of Chicago Medicine, so she invited him in for an interview.

After meeting in person, Harris was blown away by Gentry’s determination to better himself.

“I was impressed by his courageous decision to leave a job where he was underemployed, to find something that allowed him to be challenged and potentially increase his earning capabilities,” says Harris.

Gentry says his experience working with Harris was “like a dream.”

“Shashu was extremely helpful. My interview with her felt more like a conversation with a friend. She encouraged me to never settle in life,” says Gentry. “After that interview, my mentality changed—I was more motivated than ever to find the right job for me.”

Within a few days of his first interview, Gentry received a phone call from Harris about a second interview with the University of Chicago Medicine. Just five days after his interview with the hospital, Gentry was offered a full-time position as a Public Safety Coordinator.

Gentry describes this moment as a dream come true for him. Ever since he was a little kid, he knew he wanted to work at a hospital, but in what capacity, he was not sure. He was in awe of UChicago Medicine’s campus and the friendliness of the people working there.

He started working at the hospital in August and was promoted within his first ninety days to Public Safety Officer. He now oversees up to five officers during his shift and recently became certified by the International Association for Hospital Security and Safety.

“This job has shaped me into the man I am today. Being underemployed didn’t allow me to get the most out of life or provide adequately for my family,” says Gentry.

“I definitely feel a sense of purpose now because I love coming to work and my team counts on me to bring this attitude with me every day.”

“A majority of the under- and unemployed job seekers that we see lack the network it takes to get a job,” says founding president and CEO Marie Trzupek Lynch—so Skills for Chicagoland’s Future works closely with employers and job seekers to bridge that “access gap.”

Before working at UChicago Medicine, Gentry was living paycheck to paycheck. He says he now lives a completely different lifestyle.

“It’s rewarding to see that my income now reflects the quality of my performance,” says Gentry. “I just bought a car and moved into a new apartment near the hospital. These are things that I could not do while underemployed.”

With his new job, Gentry looks forward to enrolling his daughter in dance classes next year to pursue something she is passionate about.

“Skills has single-handedly changed my life for the better,” says Gentry. “A career is one of the most important accomplishments in a person’s life, and I finally feel like I’ve found the right one for me.”