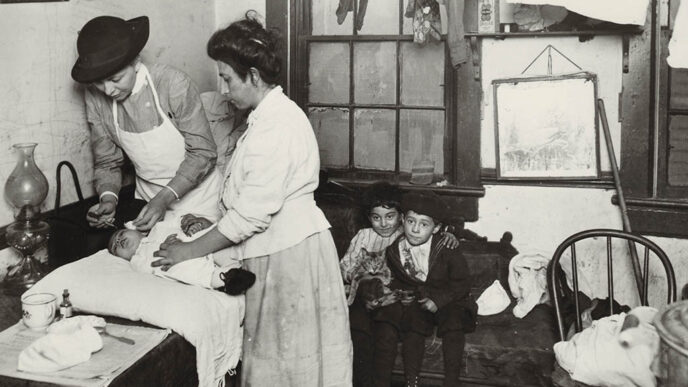 For Children with Disabilities, Early Survey Provided Insight and Understanding

In 1924, Frank Loomis published the final installment in the early Trust’s series of social surveys.

A 1924 survey found that disease caused most disabilities in children—only 4% resulted from accidents.

Requested by the Rotary Club of Chicago and prepared by Jessie L. Stevenson, who supervised work with children with disabilities at the Visiting Nurse Association, the survey was titled Crippled Children in Chicago, reflecting language that, while no longer in common usage, was standard at the time.

It shed light on how children’s afflictions were acquired, revealing that the vast majority originated via disease: infantile paralysis (polio), congenital deformities, muscular dystrophy and other conditions. Only four percent were acquired via accidents.

The survey also described and mapped clinics and institutions that attended to children with disabilties.

Although the survey was criticized as incomplete in its assessment of the entire population—particularly lacking was any mention of Chicago’s African-American community—it was still considered one of the most thorough overviews of its kind at the time. Significantly, the study established the Trust’s long and continuing commitment to the health, wellbeing and civic inclusion of persons with disabilities.