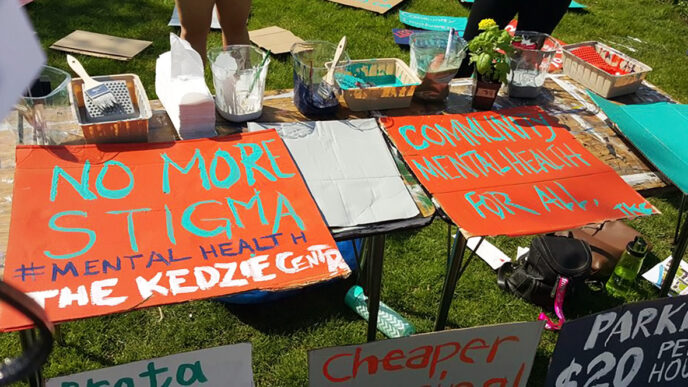 In recent months, the local news has reflected an increasing awareness of the complex and interlinked challenges of mental health, public safety and community vitality.

As Diane Plotkin, a board member of the Institute for Community Empowerment remembers, “We not only treated people in the clinic, but in the community.”

But soon the widespread defunding of public services would begin to threaten that system. In 1991 the City shared plans to close the centers, leaving mental wellness in the hands of private providers.

“The private centers did very good work,” Plotkin says. But the public system filled gaps left by for-profit providers—treating patients who could not pay, or needed ongoing treatment without time limits on their care.

Without this essential safety net, mental health experts were concerned that those most in need would be left untreated, at risk of ending up on the street.

The Coalition came up with strategies to convince the City to continue funding mental health for several years, until the early 2000s. But with clinics closing, services slashed and the system fragmented, it became clear that these efforts were just postponing the inevitable.

“The city had a jewel,” Plotkin says. “And they destroyed it.”

Executive director Angela Sedeño cuts the ribbon to mark the opening of the Kedzie Center, a community-led and community-funded mental health resource serving Chicago’s North River neighborhood. After the city began dismantling its public mental health network, a coalition of local providers and advocates looked to an innovative ballot referendum process to fill the gap.

Chicago’s mental health advocates realized that they would need a new approach. They approached Robert Gannett, executive director of the Institute for Community Empowerment, who helped an idea take shape.

Under their plan, a community could move to put an advisory referendum on the ballot to voluntarily raise local property taxes. The increase would be about $15 to $20 per year—“enough to fund a vibrant mental health center,” Snedeker says.

“A lot of people were skeptical, including the aldermen, who said ‘This is great. This is democracy in action. But you’ll never get people to vote for it.’”

In the 1980’s, Chicago’s mental health system served residents at 19 publicly funded centers. “The city had a jewel. And they destroyed it.”

But in 2004, their outreach efforts in the North River community on Chicago’s northwest side built enough support to win a 58% vote for the measure—and a 72% approval vote when it was again brought to a vote in 2008.

With grassroots local support secured, the Coalition worked with a bipartisan group of state legislators to draft the Community Expanded Mental Health Services Act. The Act would give any community in Chicago the authority to create a mental health services program if it is initiated, funded and approved by the community.

In March 2011, Governor Quinn signed the bill into law.

That set the stage for the North River community to vote again—this time, a legally binding referendum to establish its health center. Local residents staged a community-wide education campaign, knocking on doors and using every venue from farmers markets to church services to educate neighbors about the benefits.

On November 6, 2012, 73% of voters supported the referendum and the North River Expanded Mental Health Services Program was born.

From there, a community commission oversaw an open, public process to identify the right provider to run the center. All bidders were required to complete a scan of existing local services, to ensure that their plan would benefit the neighborhood and meet its pressing needs.

Today, the Kedzie Center at 4141 N. Kedzie is ensuring that everyone in the area has access to compassionate, quality and culturally-informed mental health care. Most importantly, the neighborhood continues its active participation. For example, local faith and community leaders have formed a network to help ensure that individuals they come in contact with who would benefit from services are referred to the Center.

As Snedeker explains, “This is what community health is supposed to be. Tailored to the unique needs of the community.”

The Kedzie Center’s bilingual Abriendo Puertas program teaches neighborhood parents the skills to support their children’s development from birth through age 7. As Michael Snedeker of the Coalition to Save Our Mental Health Centers explains, “This is what community health is supposed to be. Tailored to the unique needs of the community.”

The Coalition’s vision is to expand this model, ensuring mental health services across the city. The Chicago Community Trust has provided grant support to the effort for its potential to benefit individual residents, and the city’s health as a whole.

Alma Rodriguez, the Trust’s program officer for health, explains that the patients who most often seek recurring, ongoing treatment at emergency rooms are those with mental health needs. Treatment in emergency care settings is costly; providing treatment and preventative services in a mental health care facility not only leads to better patient outcomes, but is more cost-effective for the health system in the long run.

And today, mental health advocates are counting down to the November election, when a ballot referendum could kickstart a second community-led Expanded Mental Health Services Program—this time, on the City’s west side.

According to community leader Jackie Ingram, the effort began when Father Larry Dowling of North Lawndale’s St. Agatha Parish met with Snedeker and Gannett, to investigate the idea of following in North River’s footsteps. Four church locations on the city’s West Side were identified as hubs for organizing similar efforts.

“Politicians talk about how people on the south side or the west side don’t vote, don’t get involved with their community. But this sends the message that we are involved. People here do care.”

At Fr. Dowling’s request, Ingram became a member of the community action team for North Lawndale.

“When Father Larry asks you for something, you don’t say no.”

With guidance from Snedeker and Gannett, Ingram’s action team held community meetings and reached out to fellow parishioners in an effort to build support and garner the 2,000 signatures required to introduce the referendum.

“I thought it would be a lot harder,” Ingram recalls. “But Mike made it easy. They’d done it before. We said, ‘If it worked for them, it will work for us.’”

And it did. By August 2016, the North Lawndale team had collected 10,000 signatures.
A referendum is now on the ballot for vote on November 8.

“It was a feeling that I can’t express,” Ingram says. “Politicians talk about how people on the south side or the west side don’t vote, don’t get involved with their community. But this sends the message that we are involved. People here do care.”

Residents deliver more than 10,000 petition signatures to the Chicago Board of Election Commissioners for a local ballot initiative to establish a mental health facility for the west side. Alma Rodriguez, the Trust’s program officer in health, has seen how the referendum process “creates relationships, and provides a platform for communities to get connected.”

Ingram says that the most essential tool in building support was simply talking with neighbors: standing at the bus stop together, talking about the ways their mutual acquaintances would benefit from the health clinic, showing where she’d signed the petition herself and they could too.

Meetings can inform—but face-to-face conversation about what the neighborhood needs can truly empower.

Ingram shares the story of one neighbor who was so moved by their conversation that he not only signed the petition, but went around his apartment building and got every tenant to sign as well. “He told me ‘Jackie, I’ll do anything for you. Because this is something that I need. This is something our community needs.’”