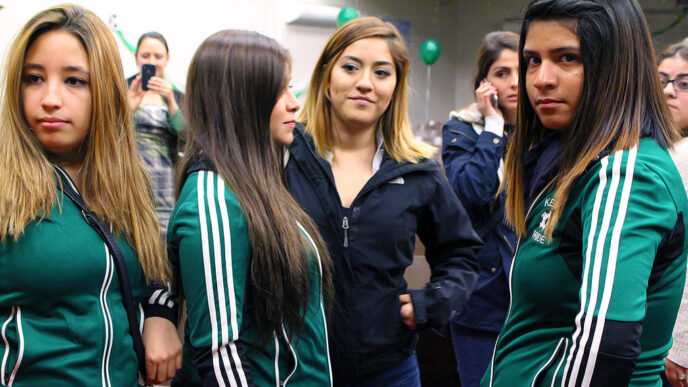 In green team t-shirts and sweatshirts, the girls of Thomas Kelly High School’s soccer team filed into their school auditorium. But this time, they walked down a red carpet rolled down the aisle especially for their entrance, to the sound of cheers and applause.

On Thursday, October 1, Kelly High hosted a screening of In the Game, a new feature by Peabody Award-winning filmmaker Maria Finitzo. The documentary follows students from the Kelly High Trojans soccer team over the course of several years, exploring the challenges they confront on and off the field.

Presented by Illinois Humanities and supported in part by The Chicago Community Trust, the free event invited local families to view the film, then take part in a Q&A with the filmmaker and local education experts.

In the Thomas Kelly High School auditorium for a screening of ‘In the Game,’ the moderator asks for a show of hands from all the Kelly alumni. This new documentary from Kartemquin Films follows the school’s girls soccer team as they fight for success on and off the field.

Located in Brighton Park on Chicago’s southwest side, Kelly High serves a predominantly Latino community with an 86% poverty level. The school struggles to provide its students with essential resources—even before the 2013 CPS budget stripped $4 million from the budget, cutting 23 teachers and 10 additional staff. With no athletic field for the girls to practice, a neighboring park is pressed into service until gang activity makes even that too dangerous.

The film begins with the final soccer game of the year—an emotional moment for the team’s seniors, playing together for the last time. “To me, we are winners,” says one player. “We stayed together through everything.”

As coach Stan Mietus prepares his players for the next season, the graduating seniors make their plans for life after Kelly High. Maria dreams of becoming an architect; an undocumented immigrant whose family brought her to the United States at age one, she struggles to find support. Elizabeth’s extra-curricular activities have helped earn her admission to four-year colleges—none of which her family can afford.

During the panel discussion that followed, director Maria Finitzo described the film’s beginnings. Her original vision was a documentary exploring the effects of Title IX on girls’ sports. She was in conversation with Walter Payton High when a contact told her she really needed to go see what Coach Stan was doing at Kelly.

“As I got into the film, I realized that it was about way more,” Finitzo says. “Sports was just a metaphor for everything that was going on in their lives. I saw young women who faced all that life threw their way with grace and resilience.”

Scheduled to take part in the panel discussion was Stan Mietus, the inspiring coach described in the film by one team member as “like my second father.” His arrival midway through the discussion brought the crowd to its feet in a standing ovation.

Beatriz Ponce de Leon, executive director of Generation All (at left) and Kelly High soccer coach Stan Mietus (at right) listen as former team captain Elizabeth Moreno describes how she immersed herself in extracurricular activities throughout her four years at Kelly, hoping to increase her chances for college admission and scholarships.

Beatriz Ponce de Leon is executive director of the Generation All initiative to unite Chicago communities in creating high-quality public high schools. She reflected, “I think we saw in the film that these young women did everything right. It’s easy to say to young people, ‘Work hard’—but what we want is opportunities for them to grow and develop.”

In the hallway at Kelly High School, a sign encourages students to aim high for college and success. Serving a largely low-income community, Kelly has been hit by millions in budget cuts in recent years and cannot offer its students a soccer field to play on, pens to write with, or toilet paper in the school bathrooms.

While In the Game offers an intimate look at the lives of extraordinary young women, Maria Finitzo stresses the broader lessons about access and opportunity that are playing out every day in schools throughout our region and beyond.

“This is not just a film about a Latino community,” Finitzo says. “It’s a film about the United States of America, which is a democracy. If we as a nation do not give everyone the opportunity to be the best they can be, then we have failed.”

The evening’s final note came from an audience member who took the mic to share her story. An alumna of the Kelly soccer team, she went on to earn undergraduate and masters degrees, and now serves as executive director of a youth service project on Chicago’s west side.

Crediting Coach Stan’s encouragement for helping propel her to success, she said, “You have no idea the impact you made on my life—and on so many lives.”