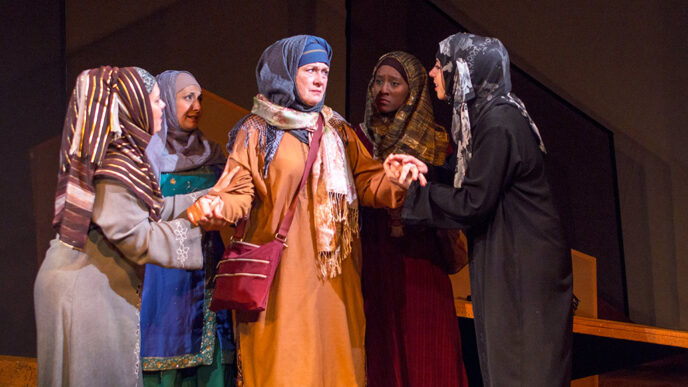 A scene from 'Mecca Tales

In 2005, The Chicago Community Trust debuted a new approach to funding small arts and culture organizations. What these groups needed most, research showed, was not a one-time burst of grant dollars—but rather a program of sustained financial support, along with strategic consulting to help develop sustainability in the face of economic shifts and organizational transitions.

And so SMART Growth launched, with a class of 40 participating cultural organizations. Their experience began with smARTscope, an organizational assessment tool developed by the Arts & Business Council of Chicago to pinpoint areas for development. Then, over the next three years, small general operating grants helped shore up their operational excellence and stability in accordance with the assessment’s recommendations.

That initial cohort completed SMART Growth in 2009. Refined by the findings of a 2010 assessment, the program graduated another class in 2013 and recently welcomed its third class of participants.

But how have the original organizations stood the test of time?

A recent longitudinal study reconnected with the original SMART Growth grant recipients to assess the long-term impacts. Among the key findings:

Graduate organizations continue to demonstrate positive impact across five out of the seven management areas. The 2010 assessment revealed progress in six areas:

In the 2014 report, all of these indicators sustained their growth—indeed, board governance and income generation continued to increase—with the exception of audience development and marketing.

Board governance was a top priority—and the focus has paid off. In their initial assessments, 88% of organizations chose board governance as a management area to focus on. Today, the data show that 75% have experienced significant board rejuvenation. Collectively, their board support shows a 14% increase in total dollars, and a 19% increase in average gift size.

Increased revenue is the long-term reward for planning. Total earned revenue was on the rise in 2010—and in the years since, the pace of growth has accelerated, to 49%.

SMART Growth’s 2007-2009 class saw revenue increase during their participation. In the years since, earned revenue has grown even more significantly (49%) and contributed revenue has shown consistent growth (3%).

Marketing shows more complicated outcomes, reflecting a drastically changed landscape. Groups showed an increase in spending on marketing efforts by 2010; but in 2014, 57% of the organizations reported spending less on marketing. This shift tracks with the growth of social media as an essential engagement tool, replacing more expensive forms of traditional marketing outreach.

Today’s opportunities for improvement? Business planning, audience analysis and staff transitions. Despite the overall strength of the organizations, a few key indicators lag behind, suggesting areas that might yield best results with longer-term support:

Dig deeper into these insights in the complete longitudinal study.