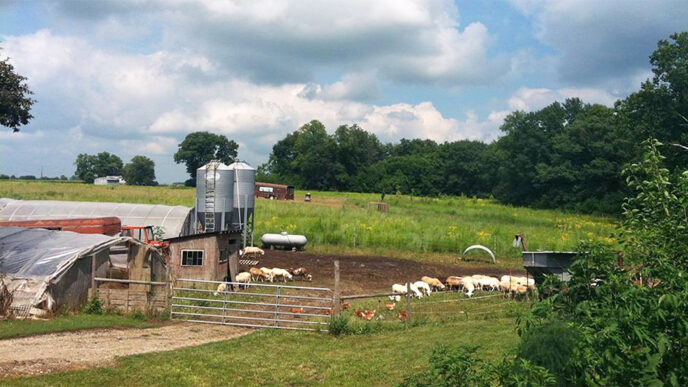 The delivery was part of the new Farm to Community Food Box Program: the big idea awarded the prize in the Food to Market Challenge.

In January 2016, Food:Land:Opportunity—a collaboration between Kinship Foundation and The Chicago Community Trust—put out a call for solutions to expand the Chicago region’s local food market. Twenty-four teams submitted proposals to this innovative award competition, vying for a prize of $500,000 to put their idea into action.

At a live final event showcasing five finalists, the Food to Market Challenge judges selected Team Leverage as the winner. A collaboration among FarmLogix, Top Box Foods and This Old Farm, this team presented the idea of leveraging delivery networks to bring fresh produce from more than 100 small family farms to underserved neighborhoods in Chicago—using Chicago Public Schools as delivery sites.

CPS students, their families and other members of the community can order food boxes online and then pick up at a nearby school. The program will expand to at least 10 school sites this year, chosen for their location in neighborhoods that lack access to healthy and affordable food.

In December, Humboldt Park’s Clemente High School became the first distribution site for the Farm to Community Food Box program, bringing affordable and healthy produce to neighborhoods where access is limited. The program will expand in 2018 to ten additional Chicago Public Schools locations.

Delivering food boxes is a model that Top Box Foods has been using for almost six years to bring healthy food directly into the communities where options are limited. As a result of the Challenge, Top Box has been able to expand their box offering to include meat that is locally and sustainably sourced.

The meat is supplied by This Old Farm, a network of more than 100 protein farmers based in Colfax, Indiana. Owner Jessica Smith joined Team Leverage as a way to expand into the Chicago market. The food box programs are now creating the demand that she needs to build her pool of farmers, increasing the amount of local, sustainable meat in the Chicago region.

The Challenge award also allowed This Old Farm to scale their operations: building out much-needed cooler space, a retail store, and activating technology to support food transparency. Smith said, “Technology has been a big investment area for us. The award allowed us to build out basic systems for our operations, to track orders and, importantly, track food safety. Our labels show you the farm the meat came from, but we’re also able to trace back to the individual animal.”

In addition to offering meat boxes at over 20 established delivery sites, the Food to Market Challenge award allowed Top Box to open up new routes to Evanston Township High School and to Olive-Harvey College, with plans to expand to all seven Chicago City Colleges in 2018.

In 2017, Team Leverage distributed more than 1,000 protein boxes, or 11,000 pounds of meat, feeding over 46,000 meals to Chicago residents. In 2018 the team expects to add additional sites, increasing sales for This Old Farm’s network of farmers and creating more opportunities for Chicago consumers to access local and sustainable meat products.

Go behind the scenes with Team Leverage and learn more about how they’re leveraging delivery chains in this feature on the Food:Land:Opportunity website: Food to Market Challenge Winner Launches Food Box Programs

Team Leverage may have taken the Food to Market Challenge prize, but the innovation and the potential demonstrated by the four other finalists presented a rare opportunity.

“A few months after the competition ended, we followed up with all of the teams to see how they had progressed and if the Challenge had helped to elevate their work,” said Michael Davidson, senior program officer at The Chicago Community Trust. “And it turns out it had.”

“Their solutions were all moving forward but needed a boost to continue doing so. Although we couldn’t support the teams at the same funding level as the Challenge winner, we were able to provide the funds they needed to take their solutions to the next level,” Davidson said.

Owner Jessica Smith (left) of This Old Farm shares her plans for expansion with Lenore Beyer, director of conservation programs for Kinship Foundation. “What we’ve been able to do since the competition is advance our five-year business plan,” Smith said. “Once we had the seed capital, the bank felt confident loaning to us for our first expansion.”

“We see common themes in all of these projects,” said Lenore Beyer, director of conservation programs for Kinship Foundation. “All of the projects are breaking down fragmentation barriers and working collaboratively with new partners. The teams are using innovative methods to tap into existing food distribution systems, creating new networks developed by local food producers.”

“All of these projects validate the strategies advocated by Food:Land:Opportunity to create a resilient local food economy.”