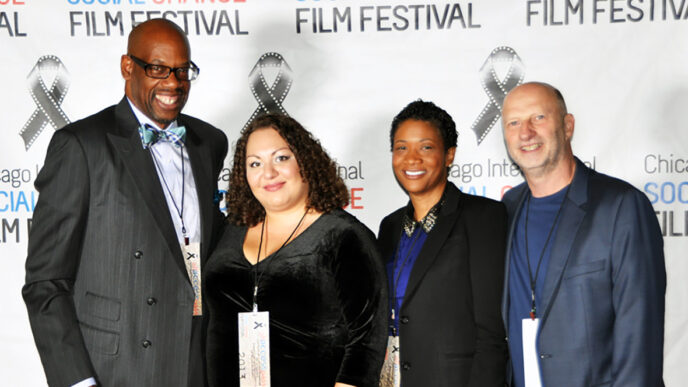 A poverty lawyer and professor, Belcore has seen in his work how important it is for social issues to get exposure in order to bring about change on a large scale. According to him, the idea for a film festival works because “seeing a struggle through a person’s eyes is the most effective way to get them to do something about it.”

The two friends will be celebrating the fourth annual CISCFF Friday, September 18th through Sunday, September 20th at the ShowPlace ICON Theatre in Chicago.

In selecting the 32 entries in this year’s festival, there were “no limits on subject matter, but we did consider whether the films educated people on an issue and would inspire them to act to address it,” says Belcore. Cambry adds, “The films highlight issues and talk about solutions for how to build sustainable ways for people to make a difference.”

Among film topics, Belcore and Cambry “see themes based on what’s going on around the world,” including entries that have covered Mideast conflict, the Black Lives Matter movement and agricultural issues in Zimbabwe.

Cambry knows all too well about the power of film to inspire change. One film in the first festival actually motivated him into action. Cambry, a filmmaker himself whose work has been featured on HBO and Showtime, is one of the forces behind BLUE1647, a Chicago-based entrepreneurship and innovation center, which focuses on giving people the skills and tools they need in order to develop their own visions through technology. According to Cambry, a film, screened four years ago, covered “entrepreneurs in countries who developed their ideas through social incubators, which connected the economic justice and social justice aspects of the issues, and that inspired me to start that kind of project with BLUE1647.”

For this year’s festival, part of Belcore’s and Cambry’s aim is to “expand the audience to people who might not usually get involved with these issues,” says Belcore, by incorporating young, fun elements to the festival such as red carpet fashion and post-film receptions at BLUE1647.

Belcore points out that “once people see [the situations in the documentaries], the desire grows to do something.” Those extra elements seem to be working. The attention CISCFF has garnered over the last three years has improved fundraising, grown their audience and has started to generate its own buzz.

That buzz has also begun to effect having “filmmakers start to make films hoping to have them showcased at [CISCFF],” says Belcore. There were 450 submissions for this year’s festival, creating a much more difficult process for the film selection committee.

For films on the bubble, Cambry and Belcore started CISCFFcinema.com to try to give more of them the exposure they need. “We want to give student and amateur filmmakers a platform,” says Belcore, “but we are limited financially right now by our ability to pay for more theaters. But, we’re seeing that start to change as more people learn of the film festival, get more excited about the films we showcase, and get more involved in the movements relating to addressing the issues uncovered in the films.” All of the money from the festival is put back into increasing exposure and generating support for the issues raised by the filmmakers.