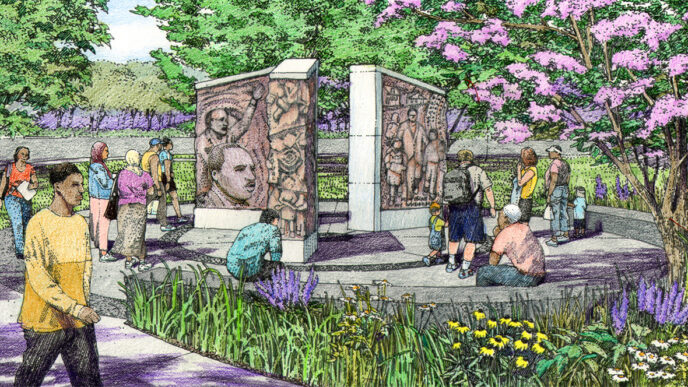 The MLK Living Memorial will include a permanent art installation commemorating Dr. King's activism in Chicago.

In the park, the marchers confronted thousands of violent protesters armed with rocks, bottles and denigrating signs. King would describe the crowds that day as some of the most “hostile and hate-filled” he had ever seen.

Dr. King and the freedom marchers that August day were challenging Chicago residents—and the country—to confront the systemic racism and violence that sought to keep black families out of urban neighborhoods like Marquette Park. Dr. King called this march “the first step on a 1,000 mile journey.”

Fifty years after that day, how far have we advanced on that journey?

“About two miles down the road,” laughs Otis Moss III.

The senior pastor of Trinity United Church of Christ, Rev. Dr. Moss has civil rights advocacy in his DNA—his father, Otis Moss Jr., was close friends with Dr. King and marched with him in Selma in 1965.

In turn, Rev. Moss built his ministry on community advancement and social justice activism. He has spent the last two decades practicing and preaching a theology that calls attention to the problems of mass incarceration, environmental justice and economic inequality.

Rev. Moss reckons candidly with the unique and persistent challenges that Chicago faces in reconciling with race—from its historical dismissal of segregation as “a Southern problem,” to its distribution of wealth and resources.

“Chicago is a city that is built on race,” Rev. Moss explains.

But he is also optimistic about the future of the struggle for justice. “Transformation happens in communities when young people are empowered, they’re educated,” Rev. Moss says. “And it’s critical that young people are not only just on the front lines, but they are also the organizers—they are setting the direction.”

Learn more about why the Trust supports this memorial, and how we support our neighborhoods in the work of changing social norms and structural policies that hold us back from being the First City: Thousand Mile Journey Toward a United Chicago Continues

With leadership from IMAN and support from the Trust and other funders, the memorial project will feature a recreation on August 6 of a portion of the historic march to Marquette Park. The march kicks off a weekend festival in the park, honoring Dr. King’s legacy by using the power of art, activism and relationship-building to radically re-imagine our city—and our world.