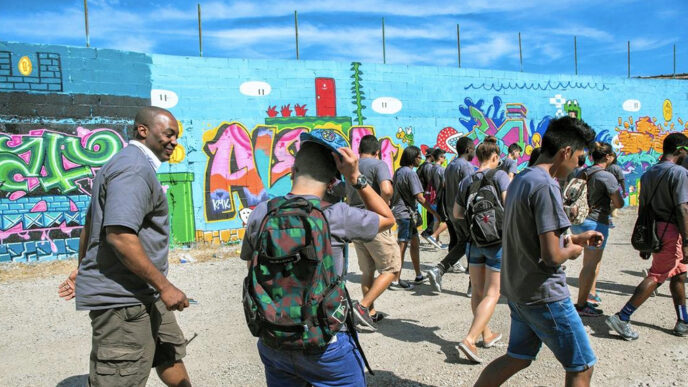 Matthew Brewer grew up in the Greater Grand Crossing neighborhood of Chicago. And for most of his childhood, he didn’t have much reason to leave it. “The world wasn’t much bigger than the South Side to me,” he says.

That changed in 1997, Brewer’s junior year of high school, when he became involved with a program called Future Leaders Chicago.

Then a joint undertaking of The Chicago Community Trust and Leadership Greater Chicago—a premier leadership program for Chicago’s business, public and civic leaders—FLC took Brewer and other student leaders from around the city on monthly field trips designed to expose them to a broader view of Chicago. They visited various communities in Chicago and learned about the complex issues facing the city, such as crime and violence, public health, education and race relations.

“All of a sudden, I was going to different parts of the city I had no idea existed,” Brewer recalls. “I saw African-American leaders doing things I had no idea African Americans could do, and it broadened my horizons in a real way. It changed what I thought was possible for myself.”

Brewer went on to earn his bachelor’s degree from Stanford, his master’s degree in business administration from Harvard, and his law degree from Yale. He is now a partner at the law firm Bartlit, Beck, Herman, Palenchar & Scott and a commissioner of the Chicago Housing Authority.

But when Brewer returned to Chicago in 2008 and sought to volunteer with FLC, he learned that the program had run only five years before being discontinued in 2001.

Future Leaders of Chicago alumnus Matthew Brewer looked forward to volunteering with the program he credits with broadening his worldview. When he found that it had been shuttered, Brewer recreated it as floChicago.

Now, with the aid of a $65,000 grant from the Trust as well as the support of the University of Chicago Office of Civic Engagement and Blue Cross Blue Shield of Illinois, Brewer and other civic leaders have successfully resurrected the program that made a profound difference to him.

They re-launched the Future Leaders Chicago program, now known as floChicago, in summer 2015 to carry on the work of cultivating the next generation of leaders.

Selected from a competitive pool of applicants, the inaugural class of 30 high-school students from 21 schools and 25 neighborhoods had the opportunity to meet with Chicago’s civic and community leaders, learn about the city’s pressing challenges and promising opportunities, and connect with their peers. Thanks to the generosity of the Trust and other donors, the program is free for the students.

Through the floChicago leadership program, students from across the city met civic leaders like Jesse Ruiz, at the time the vice president of the Illinois Board of Education and interim CEO of Chicago Public Schools.

“We have a really diverse and dynamic group of young people from all walks of life who have demonstrated leadership in different ways,” Brewer says. “There are captains of teams and presidents of organizations, but there’s also a young woman who had to raise her family because her parents couldn’t, and that’s leadership, too.”

The inaugural floChicago experience kicked off with a week-long residential leadership program hosted by the University of Chicago, where the students stayed in dormitories. “For a lot of them, this was their first time being away from home,” Brewer says. “We wanted to give them a sneak preview of college.”

The week saw students meeting with residents of the Little Village neighborhood to discuss community-level leadership, taking part in a tutorial on the college admissions process, visiting the Trust offices and City Hall, sitting in on a sentencing at the Cook County Criminal Courts and working on group projects about social issues such as poverty, gentrification and education. Since then, the students meet monthly for further discussions and relationship-building.

FloChicago has continued through the summer of 2016, and is poised for long life. Though its core model will remain the same, it will feature “even more partners and outreach,” says David Prystowsky, campaign vice president of the Jewish United Fund of Metropolitan Chicago, who helped re-launch the program.

floChicago’s 2015 summer program included a week-long stay in residence at the University of Chicago—many students’ first time staying away from their neighborhoods and homes. As Brewer explains, “We wanted to give them a sneak preview of college.”

“We want to really foster connection by people who might not have crossed paths otherwise. The hope is that through these relationships, projects and partnerships will happen, and the segregation throughout Chicago will start to melt away.”

“None of this would have been possible without the Trust,” Brewer adds. “It was really the boost floChicago received from the Trust early on that gave it the momentum we needed. We had a strong hunch—more than a hunch—that there was a real potential impact to be made here, and we’ve confirmed that in a glowing way.”