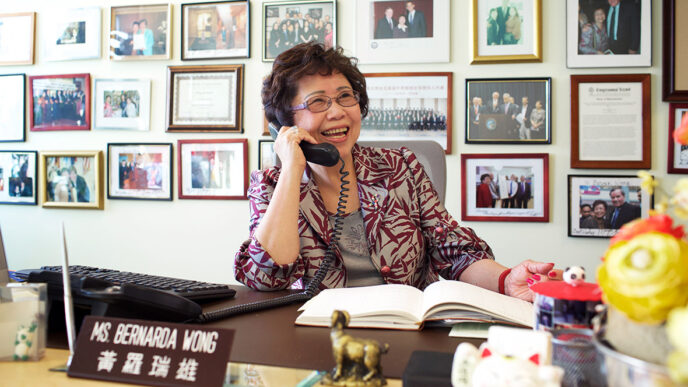 “Everyone Knows Bernie”: The Dynamic Leader Building Networks Across Chinatown

Standing in Bernarda “Bernie” Wong’s office at CASL’s Chinatown facilities can be overwhelming. Her wall is lined with pictures of her with mayors, congressmen, media figures and the President, along with the numerous awards she has garnered over 35-plus years of community leadership and social work. One gets the impression that she knows everyone. Or, as her assistant puts it, “everyone knows Bernie.”

[pullquote]“I never thought of doing anything else”: Bernie Wong of @CASLmedia builds community across generations in Chinatown[/pullquote]

That is not by accident. As the founder and president of the Chinese-American Service League (CASL), Wong has dedicated her career to finding crucial resources and partners and connecting them to community needs in Chinatown. Though many of the early staff still work there, of whom she is quick to acknowledge that “without their dedication, none of this would be possible,” Wong is still very much the heart of CASL.

Dedication drives Wong’s collaborative approach to building services for her community. Her constant efforts to bring outside resources to bear in Chinatown have made it so “every foundation knows CASL, and come to our events.” From her first project in 1978 to start an immigration service organization—which received seed money from The Chicago Community Trust—to her more recent effort with the U.S. Department of Housing and Urban Development to provide senior housing, she considers “connecting Chinatown to outside communities and organizations to be [her] biggest accomplishment.”

Those connections are vital to thousands of people who have benefitted from CASL as an entry point to their new country and community. The relationships Wong has built—with organizations like the United Way, Chicago Public Libraries, United Charities, Metropolitan Family Services and many more—are central to fulfilling the original needs that she saw for English classes, access to Social Security benefits and employment opportunities.

Those core programs are still among the 30 offered at CASL, but now there are multi-generational services that include pre-K classes and day care, chef training courses, community service groups for and by seniors and many others. Wong recognized from the beginning that “without a social connection and community, it is a very limited life.”

Now that there are second- and third-generation members benefitting from CASL’s programs, Wong has spearheaded language and music programs in order to retain the community’s cultural heritage. Many past clients also return to give back to the organization that helped them. Notably, international artists the Zhou brothers, Shanzuo and Dahuang, contributed a large-scale painting for CASL.

When asked about how she was inspired to do so much for others, Wong responds, “I never thought of doing anything else.” Growing up in Hong Kong, her mother “always found time to volunteer and help people she didn’t know.”

She recognizes that many people come to her with just their dreams for themselves and their children, just as her parents had for her when she came to the U.S. to attend Briar Cliff College in 1966. “We grew up poor, but my mother was very determined that we all have a very good education.” She continued that education with a degree in social work from Washington University in St. Louis.

With so much already accomplished, the 71-year-old Wong is still busy planning new ways to improve her community. The CASL senior housing facility has been a successful step in providing care for seniors in Chinatown; but with 130 residents already, they have “a waiting list of 300 to get in.” Expanding independent living facilities and building a new continuum of care facility are still being planned. In the end, Bernie’s dream is really to help others’ dreams come true.