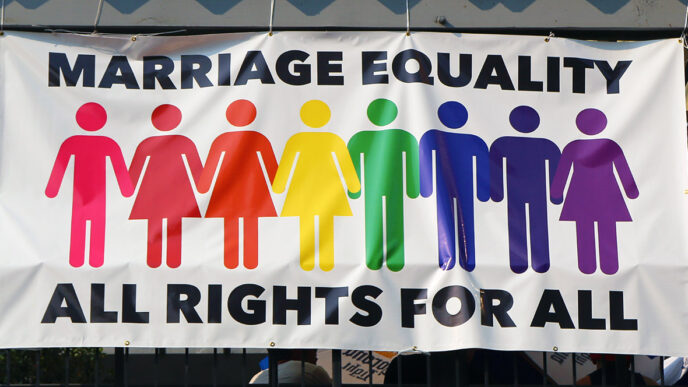 Serving as co-counsel in the landmark Hawaii marriage case Baehr v. Miike, which paved the way for the global freedom to marry movement, Evan Wolfson has been a fierce advocate for the rights of gay people for decades.

In advance of his special talk at the 2015 Chicago Humanities Festival, the founder and president of Freedom to Marry shared his thoughts on why he gives back and why being involved in civic affairs is not only important, it’s essential to ensure that our community, and our nation, live up to our ideals.

Q: When did you start giving back? Tell us about your first experience with giving or receiving.

A: I remember learning even in Hebrew school that charity, or as it is called in Hebrew tzedakah, is part of being a good person; that everybody has an obligation to give back. And so every week, we kids would donate to the tzedakah box. And likewise, when I was in public school, where I was during the day before going to Hebrew school after class, I remember the campaign to raise money for UNICEF with the little orange boxes. That made an impression on me as well. So I was lucky that, right from when I was a little kid on, it was always clear that it was important to contribute to the community.

And not just money—also volunteering time and being involved. I remember as a kid, volunteering at a rehabilitation center that was near my home and working with kids who had physical disabilities or challenges part time. And, I also got involved in a variety of causes politically as well. So [giving back] has always been part of my consciousness—from childhood on.

Q: What impression did those experiences make on you?

A: Well, it was part of my larger interest in politics, history and making a difference in the world. And it really came naturally. It wasn’t just something to read about or something that others should do, but something that I should do and that really mattered to me and stuck with me from early age. It was part of my larger engagement with the world. I loved to read history and learn about politics. I followed the news and was always drawn to making a difference.

Q: What inspires or motivates you to give back?

Well, the Hebrew concept is called tikkun olam, which means “to mend the world.” It always resonated with me that our precious time on this planet is limited, and the most satisfying thing is to make a difference and leave the world a better place.

Q: What is one of the greatest acts of kindness or giving you have witnessed?

A: One of the greatest acts of kindness that meant a lot to me was my non-gay co-counsel in Hawaii, Dan Foley, who first took up the case for the freedom to marry and stepped up because he believed that it is wrong to deny gay people something that he, as a non-gay man who is married, has and treasures. Dan’s vision and commitment in taking the case, and bringing me in as co-counsel, launched this whole ongoing global movement.

At the time in the 1990s when he started the case, there were zero countries in the world where gay people could marry. There were zero states. And now of course, we have 50 states and we have 22 countries on five continents. So, his living up to his ideals and stepping up as a non-gay person to advance the rights of gay people has made an epic difference around the world and certainly put me on the path that has become my life’s work.

Q: How has giving changed the way you think about receiving help from others?

A: That is a hard question to answer—I don’t think I have ever had trouble receiving help. I do think that giving and receiving are part of what connects us as human beings and it is part of what is necessary in a political sense. We must all do our small part to make a more perfect union and to advance human rights around the world.

Those sound like lofty phases, but they were very meaningful to me even as a kid. As someone who is a great lover of history and has always felt a sense of political engagement, they always felt really natural and real to me—not just abstract. You can’t have a successful country without people relying on one another and working together in community. I am a strong believer in freedom and I am also a strong believer in civic investment, the shared civic space and being there for one another—that is part of the mission of government and part of the mission of people in a successful society.

I don’t know if giving has changed my feelings about receiving, but I have been in the lucky position to have already received a lot from my family, from my community and my society. My obligation is to appreciate what has been given to me and to give.

One of the greatest acts of kindness that meant a lot to me was my non-gay co-counsel in Hawaii, Dan Foley, who first took up the case for the freedom to marry and stepped up because he believed that it is wrong to deny gay people something that he, as a non-gay man who is married, has and treasures… His living up to his ideals and stepping up as a non-gay person to advance the rights of gay people has made an epic difference around the world and certainly put me on the path that has become my life’s work.

Q: How do you think giving creates stronger communities?

A: One of the fortunate things we have in the United States is a political system that is supposed to be working for us and through which we can create a more perfect union. And at the same time, as Americans, we also have a strong tradition and serious understanding of personal engagement, coming together in associations and doing good work—not just relying on the government. I really think both are wonderful and important. It is important that philanthropy not be looked to supply all the needs and fill all the gaps, or be used as an excuse to not make our government work for the people. But, at the same time, it is wonderful that we Americans–going back to observations made by De Tocqueville–understand the importance of coming together in associations and giving our dollars to causes we believe in and not just relying on the government to do everything.

I actually just spent two weeks stumping through Europe as a guest of the U.S. government, meeting with advocates and speaking, campaigning, pushing and sharing lessons learned. Having spent most of my life suing the government, it was wonderful that we now have achieved the freedom to marry and brought our government to the right place. Now, our government is championing human rights, including gay rights, around the world and inviting advocates like me to be part of that human rights outreach and work.

As I was speaking in Europe, one of the things that was striking was how American an idea it is that we should come together in associations and private initiatives and that we donate money—we don’t look to the government to do it all. At the same time, I think that the Europeans also have something to show us on the importance of investing in the civic space.

In each of the countries I spoke in, there were reminders that the government can be a very important force for good—a bedrock American principle that too many Americans have let go of. I am a believer in both parts of that balance between private and public engagement. I am proud that I have been able to add my piece to the work, and I am looking forward to more working for the public good and human rights in whatever my next incarnation might be.

Q: What advice do you have for others who want to do good?

A: Believe in the power of change. Believe that other people can be inspired to join you and to rise when you put forward a clear goal, lay out a clear strategy and do the work. Don’t be discouraged. Don’t start with the negative. Don’t spend all your time cataloging the problems; talk about the solutions, talk about the pathway forward and believe it.