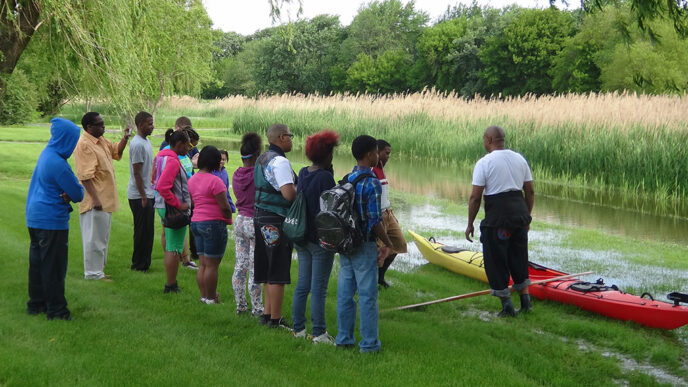 In the late summer of 1959, the western hemisphere’s top rowers filled the waters of Cook County’s Cal-Sag channel. Their mission: take home the gold medal at the first Pan American Games on U.S. soil. For a week, the industrial channel came alive with speeding rowboats, adrenaline and multilingual cheers.

But when the event wrapped up, the recreation area’s upkeep followed suit, welcoming years of neglect and industrial pollution along the channel’s banks, despite regular rowing use. At least until now. This once-thriving pocket of the region is getting a reboot with the help of a sport that once put it on the international map: rowing.

The 220-square mile section of the county, dubbed “Millennium Reserve” in 2012 at the start of the area’s makeover, may soon be home to a state-of-the-art rowing facility, the Blue Island Intercollegiate Rowing Center and Marina.

Blue Island is about to release a feasibility study on the area, conducted by a design team with funds from The Chicago Community Trust, that will likely kick-start construction. The center aims to do more than attract rowers from across the country for competitions and practices.  Developers also hope to spark local economic growth and ongoing environmental rehabilitation in the reserve.

It’s an idea that’s grown from the ashes of the recent financial recession: revamping abandoned, contaminated industrial lands with a new wave of economic development and land restoration.

“With the addition of a rowing center, marina, and other revenue-generating opportunities like an adjacent restaurant and housing, the project is an attractive addition to the region’s economic expansion,” said Blue Island Mayor Domingo Vargas.

While this rowing-fueled plan is unique, similar revitalization projects across the country have given those involved a peek into the future. From affordable, green housing projects in Denver, Colo., to urban stream restoration in in Montgomery, Ala., communities have seen a spike in economic sustainability once a deteriorating area gets an environmental re-boot.

Detroit’s economic decline yielded a dramatic 25 percent decrease in the city’s population. With this exodus came an increase of abandoned homes and infrastructure, leaking waste and debris into the surrounding ecosystem. But over the past few years, community members have worked with multiple jurisdictions to turn the empty lots into neighborhood parks—jumpstarting nearby community engagement and economic development.

“The Millennium Reserve will expand the amount of green space in the Chicago area by more than 140,000 acres and give families living in our largest urban area more opportunities for outdoor recreation.” former Illinois Gov. Pat Quinn said in a press release. “This important project will convert an industrial area into valuable open space that gives area families a place to gather, play, and experience the great outdoors.”