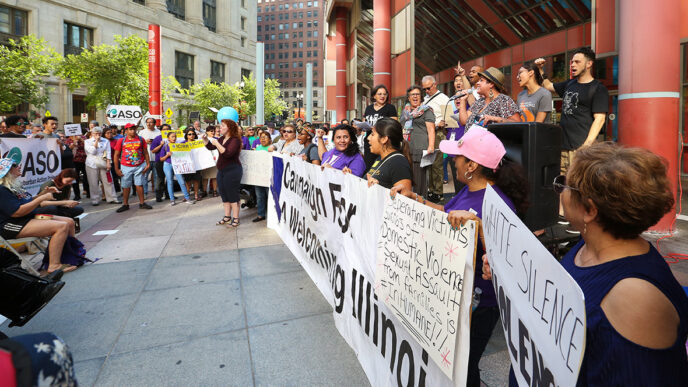 At a rally outside the Thompson Center in downtown Chicago, an impassioned speaker in a purple t-shirt takes the mic.

“We believe in a state where all residents feel welcome and secure, no matter where they were born or what they look like!” she declares. “Do we want Governor Rauner to sign safe zones into law?” The crowd responds: “Yes!”

The August rally was organized to show support for SB-35, a bill to establish safe zones for immigrants at hospitals, churches, schools and courthouses. And the speaker is Rayza Morales Ortiz, a volunteer with Pilsen-based Mujeres Latinas en Acción. In Spanish and English, the back of her shirt says “Empower a woman, to empower a family, to empower a community, to strengthen a nation!”

Ortiz came to Mujeres Latinas four years ago after experiencing domestic violence. “I was a scared woman,” she says. “I was scared to live by myself. And I learned that there’s nothing to be afraid of. Mujeres Latinas makes you strong, and makes you realize you’re not alone.”

Founded in 1973, Mujeres Latinas en Acción is the longest-standing Latina-led organization in the country, offering a variety of violence prevention and social services for survivors of domestic violence and sexual assault, with a focus on empowering clients to become community leaders.

Recently, the group opened a center in South Chicago for sexual assault survivors; another site in North Riverside offers programs to the growing number of Latinas moving to the western suburbs. In 2019, they’ll open another facility in Brighton Park, in partnership with Esperanza Health Centers.

In addition, Mujeres Latinas coordinates referrals with local hospitals and domestic violence shelters: they are one of three organizations in Chicago to offer free court-ordered supervision for noncustodial parents, and the only one to do so in Spanish.

The group’s Latina Leadership program focuses on, in Cano’s words, “having an understanding of your voice, and what it means to amplify that voice.” Through the 20-week program, participants learn to develop the assertiveness and confidence to become effective community advocates.

Building on these skills, the Family Engagement program gets participants involved with issues affecting their community: health care, women’s rights, gender-based violence and immigration. Some participants from the program regularly travel to Springfield to lobby legislators, speak at rallies and serve as members of several coalitions.

“Through these programs you can really see the growth of women who joined us in a moment of crisis, and now are changing the community,” says Cano.

“Through these programs you can really see the growth of women who joined us in a moment of crisis, and now are changing the community.”

Since 2010 Mujeres Latinas en Acción has received multiple grants from the Trust’s Unity Fund, a donor-driven initiative to quickly channel funding to organizations providing direct services to the most vulnerable members of our community. The most recent Unity Fund grant was awarded in 2018 to support bilingual/bicultural programs in gender violence prevention and intervention.

Due to the three-year Illinois state budget impasse, the organization’s staff is furloughed one day a week for four months, forcing them to rely heavily on volunteers. According to Cano, support from the Unity Fund has been key to ensuring continuity—allowing the organization to help clients grow and thrive over time.

At the rally, a woman in a pink cap stood in front of the stage holding a sign. Her name was Frances Velez, and she came to Mujeres Latinas in 2007 for support after experiencing domestic violence, sexual assault and financial abuse. Now she is a volunteer and a community leader.

“Mujeres Latinas saved my life,” Velez says. “And now, saving other women, it helps me to heal.”