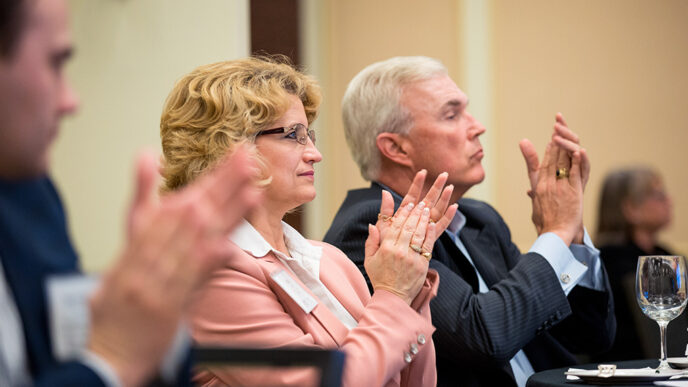 Erin Smith applauds with her colleagues during a Disabilities Fund sponsored event.

The Disabilities Fund created the Inform and Act factsheet series to initiate dialogue about tackling our region’s greatest challenges. To be successful, the disability community must be included. We aim to expand understanding and ensure that disability is recognized and taken into account at all our region’s tables.

Disabilities Fund advisory board member Erin Smith met with ADA 25 Advancing Leadership intern Michael Wiley to talk about why this work is important and how disability employment is good for business—and good for our region’s economy.

When you think of all Chicago has to offer, you might call to mind our museums, mild summers, Millennium Park and more. From the Art Institute to Navy Pier, potential visitors certainly have more than a weekend to work with.

Why, then, is everyone leaving?

The ugly truth is that our population has been on the decline for years now. Last year alone, the Chicago region lost more than 22,000 residents—a trend that holds true at the state level, too. This level of decline is dangerous for future growth. It sends a bad signal to businesses and entrepreneurs who know that a diverse, well-educated talent pool is crucial to their bottom line.

For the Chicago region to continue attracting new businesses, it needs to revitalize its labor force. Thankfully, the Disabilities Fund knows just where to start.

The disability community can provide untapped potential for the Chicago region—if its businesses know the facts about disability employment.

“There needs to be a stronger voice for disability and inclusion,” Erin Smith says. “People need to be educated about the fact that it’s actually very inexpensive to be inclusive.”

People with disabilities experience employment rates at less than half that of the rest of the population. The disability community can provide untapped potential for the Chicago region—if its businesses know the facts about disability employment.

Smith is a former member of Chicagoland’s Metropolitan Mayors Caucus, having served as the village president of Lakewood for eight years after four years as a village trustee. In 2015, she served as chairperson of the Caucus’ task force for the 25th Anniversary of the Americans with Disabilities Act. In both roles, she learned more about Chicago’s disability and business communities—and the startling lack of communication between them.

“‘I want to support disability inclusion, but I don’t know the group to call for support,’” Smith recalls one workplace recruiter saying. “‘Organizations that support employment of veterans call me every week with candidates. With disability employment, I don’t know where to begin.’”

That, Smith says, is the central problem: that well-intentioned business owners simply don’t know where to begin.

The first step to solving any problem is to understand it and to do that, the Disabilities Fund Inform and Act Series is here to help. Data shows that employing people with disabilities increases productivity and reduces turnover by nearly one-third.

“I passionately believe that Chicago is one of the greatest cities in the world,” Smith says. “And paramount to that greatness is the talent pool that exists here.”

The Chicago region is at a tipping point. In order to remain competitive, it needs to take a long look at its talent pool, in all its diversity, and embrace disability as a source of innovation.

The Disabilities Fund’s Inform and Act factsheet presents critical data about how disability employment is good for business. How can you implement a #DisabilityLens in your workplace and increase innovation and productivity? Tweet @ChiTrust and share your plans.