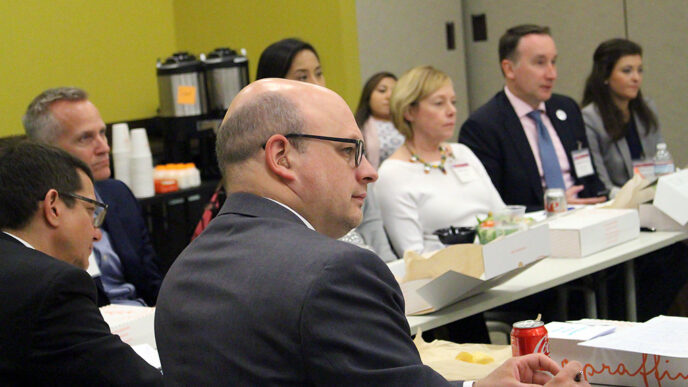 Chad Turner at Microsoft's On the Table lunch conversation in 2017|

Developing Chicago’s Next Generation of Leaders with Disabilities

On October 13, Chad Turner was a featured speaker at the CBLN Disability Inclusion Opportunity Summit. Turner—vice-president, finance & business manager at JPMorgan Chase, and a member of the ADA 25 Advancing Leadership 2017 Fellowship class—shared how this program for emerging leaders with disabilities has positively impacted his civic engagement and leadership, excerpted here.

The 2017 Leadership Institute consisted of 16 individuals, with a variety of personal and professional backgrounds, working together with one common goal: strengthen our skills to serve civic leadership roles in the Chicago region.

We trained on several topics including public speaking and identifying communication styles, the history of the disability movement and assessing our individual leadership traits. What I personally took away from the experience was the several friendships with individuals who can share a unique view into who I am.

I have worn hearing aids since I was in the second grade. But I don’t consider them my disability—I have found them to be a source of great strength. It taught me the value of hard work at a very young age, and more importantly how to listen.

As a result of Advancing Leadership, I have had the opportunity to take on public service roles at three well-known public entities in the Chicago area:

First, earlier this year I was named a governing member ambassador for the Chicago Zoological Society. The ambassadors serve as advocates for the Brookfield Zoo and advisors on the Zoo’s efforts to promote inclusion of the community through efforts to open exhibits to all citizens of Chicago. The Zoo received the 2016 Angela Peterson Excellence in Diversity Award Top Honors from the Association of Zoos and Aquariums for its “A Zoo For All” suite of diversity and inclusion initiatives.

As the saying goes, one good opportunity leads to another. In May I attended an On The Table event at Microsoft where I shared the great work at the Zoo. This resulted in an invitation to join the Museum of Science and Industry’s Mission Accessible Task Force, that advises the Museum on its content and design to enhance accessibility and equity. Like the Zoo, MSI is taking a leadership role in its industry to promote greater inclusion, and I am proud to be a part of both of their efforts.

My third opportunity: I was recently invited to join the finance committee for Access Living starting in 2018.

I know these opportunities would not have been possible without the support of ADA 25 Advancing Leadership. And it all started because I applied to be part of the Leadership Institute last year.

I would like to challenge you to identify emerging leaders with disabilities that you know, to apply before the October 31 deadline. I can’t wait to be in your seats next year, watching someone you identified this year be next year’s speaker.