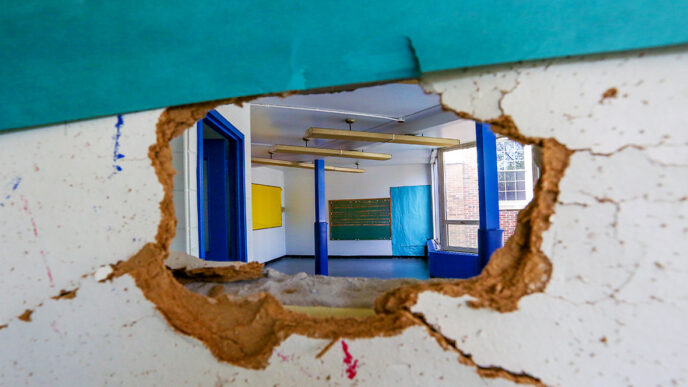 Designing a Space Where Chicago’s Youth Live Safely – and Authentically

On a quiet corner in Greater Grand Crossing, a former church daycare center is being transformed in both structure and purpose.

By spring 2019, after a $1.4 million renovation, the building will be the new home for LYTE Collective, a nonprofit that takes an innovative, holistic approach to supporting teens and young adults experiencing homelessness and poverty.

The building today contains little beyond raw brick and exposed conduit, its second-floor classrooms still painted the bright primary colors of elementary school. But in the eyes of the LYTE staff, the building, which they call the LYTE Lounge, is full of possibility.

Standing in the dim ground-floor space that will soon become a dining hall, executive director Casey Holtschneider says with a smile, “It gets lighter and warmer as you get into the space, so we like to start the tours here and move you on the journey upward.”

LYTE stands for Live Your Truth Everywhere—a motto Holtschneider, who teaches in the department of social work at Northeastern Illinois University, attributes to the work of Vaclav Havel. The mantra is an organizing principle not just for the work the team is doing, but also in terms of designing a space that will allow those it serves to live authentically.

“So many of the young people we work with [are] in the situations that they’re in right now because they weren’t able to bring all of themselves to the world at this point,” says Holtschneider.

A former church daycare is transforming into a safe place for young people experiencing homelessness, and a hub for the services provided by the nonprofit LYTE Collective.

More than 11,000 young people in Chicago are homeless and living on their own each year. Of those, 75 percent are likely to drop out of school. More than 80 percent have been victims of physical or sexual abuse. Citywide, more than half the victims of gun violence annually are between the ages of 10 and 25.

The LYTE Lounge is intended to offer young people a safe space, in every meaning of the term. It will include a computer lab, a cozy chill-out room where kids can nap or just retreat, art and music production studios and a big teaching kitchen. Additionally, it will provide a medical clinic, crisis intervention counseling and assistance with housing and other services. On a basic human level, it will offer them a place to have a hot meal, take a shower and, critically, space to store their stuff.

Chief program officer Megan Wickman was instrumental in developing and implementing the 2015 Chicago Youth Storage Initiative. It was a project developed in direct response to the common need among housing-insecure teens for somewhere safe to put their belongings: a phone, a winter coat or a box of family photos. In three years, the Initiative has installed lockers for young people all over the city, increasing the number of storage spaces from 40 to more than 700 citywide. When it opens, the LYTE Lounge will be home to another 200, from secure lockers with charging stations for phones to large lockable bins for long-term storage.

This attention to details exemplifies LYTE’s approach to helping young people outside the standard social service model. According to development officer Andrea Kaltz, visitors to the center can charge their phone—which could be key to getting a job or an apartment—while meeting with a nurse practitioner, shooting hoops in the center’s gymnasium or laying down beats in the music studio.

More than 11,000 young people in Chicago live with homelessness, increasing the difficulty of remaining in school and staying safe. When it opens in spring 2019, the LYTE Lounge will offer everything from secure storage lockers to sports programs, health services to hot meals.

Lygend Posey, now 33 and a LYTE board member, first met Holtschneider when she was 17 and homeless. She is enthusiastic about LYTE’s mission to combine programmatic and long-term support.

“Most programs give you a year of after-care, but then that’s it,” she says. “You don’t get the chance to go back and it’s kind of frowned upon to continue that relationship. I like that this structure is an open-ended relationship. I can get in touch with Casey and be like, ‘I need help doing my taxes!’”

More than 11,000 young people in Chicago are homeless and living on their own each year. Of those, 75 percent are likely to drop out of school. More than 80 percent have been victims of physical or sexual abuse.

Holtschneider credits Anna Lee, program officer for basic human needs and social services at The Chicago Community Trust, for supporting their work around youth homelessness, describing her as “a fierce, quiet storm.” When LYTE had no permanent space and no paid staff, Lee recommended a $20,000 grant in 2017 from the Trust’s Unity Fund, a donor-led initiative to mobilize support for the most vulnerable residents of our region.

“Just having had the Trust stand up and say, ‘We believe in this work and we’re excited about it’” was critically important, Holtschneider says.

And when the Knight Family Foundation put up a $500,000 challenge grant to fund the new LYTE Lounge, the Trust’s support enabled the group to bring both Kaltz and chief innovation officer Carl Wiley on as full-time employees this past January to work on meeting that challenge.

Executive director Casey Holtschneider describes the organization’s mission as fundamentally “about building authentic relationships. It’s this liberation theology idea that says, ‘I’m going to stick by and walk alongside you for as long as you need and help you get what it is that you need.’ It’s a journey together.”

“It was a really pivotal moment for us,” says Holtschneider. “We have just exponentially been able to accomplish so much since that point. It made all the difference in the world.” This fall LYTE received a second Unity Fund grant, and shortly thereafter hit their half-million-dollar challenge goal.

Another form of support has also been key: that of Sixth Ward alderman Roderick Sawyer and his constituents. The ward has a large population of retired educators, older retirees looking to give back in some capacity. “When we did a lot of block walking,” says Wiley, “a lot of folks were saying, ‘I’ve always wanted a place where I could connect with younger people. I have got all sorts of things I’d love to teach them and I want to help’—but they didn’t have a safe place to do it.” One retired neighbor across the street has become so involved that LYTE brought him on as the center’s light engineer, overseeing maintenance and some of the construction.

“We heard loud and clear from our neighbors, ‘We want this to be for us and we want this to include us and our vision and our lives,’” says Holtschneider. “I think there’s really amazing potential for the joining and sharing of different generations in this space.”

The LYTE Lounge is also providing young people with a more connected community, as neighbors have welcomed the center and stepped forward to contribute their skills. Chief innovation officer Carl Wiley says he heard from many residents, “‘I’ve always wanted a place where I could connect with younger people. I have got all sorts of things I’d love to teach them and I want to help’—but they didn’t have a safe place to do it.”

Still, LYTE’s work will always center on the young people it is designed to serve, in whatever form and for however long it takes. “We hear a lot from young people about how stigmatizing and otherizing it is to be a case that somebody is managing,” says Holtschneider.

“This is really about building authentic relationships. It’s this liberation theology idea that says, ‘I’m going to stick by and walk alongside you for as long as you need and help you get what it is that you need.’ It’s a journey together.”