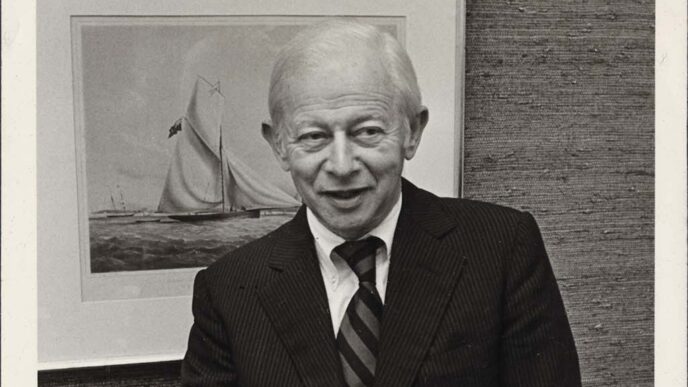 David Dangler, administrative officer in the Personal Trust Division of The Northern Trust Company, was a trusted and thoughtful advisor to many people looking to realize their philanthropic goals and interests. Dangler understood that many families face sensitive and vulnerable times when planning and preparing their estates.

“In my role as trust officer, I assisted customers over difficult time in their lives, and very often would become involved in much more than financial advice or the preparation of wills,” explained Dangler. “I became a friend of the family and trusted advisor.”

In the 1940s Dangler befriended James Brown IV, who first made him aware of the Trust and its unique role in Chicago philanthropy. Through his friendship with Brown, Dangler became involved in the inner-workings of the Trust, and began to see its many advantages for his clients.

“There are two types of trust customers — one knows exactly where he wants his money to go and designates it to The Chicago Community Trust. The other wants The Northern Trust to decide on a charity. Many times we would rely on The Chicago Community Trust to offer their evaluations of the quality of work being performed by a specific charity — and then we would act accordingly.”

[pullquote] David Dangler was a trusted advisor to many people looking to realize their philanthropic goals.[/pullquote]

Dangler was an innovator thinker. He used a new investment system for philanthropic dollars, which combined “a number of the smaller accounts while channeling the income into one receptacle and immediately invest[ing] it, so the funds were always productive.”

Dangler’s idea became the Central Investment Fund of the Trust — the primary account that generated interest on invested deposits. Additional accounts were added to pay grants to nonprofit organizations as well as routine bills. Until about the mid 1970s, every grant check was typed by hand and entered into ledgers. Dangler’s notion of a Central Investment Fund symbolized the new efficiencies that the Trust was only beginning to engineer.

For years Dangler instituted new structural approaches to old administrative problems. “The Chicago Community Trust is such a logical concept and the organization is so very well run by people I respect,” he once remarked. “It has played such a tremendous role in private philanthropy, I can’t say enough about it!”