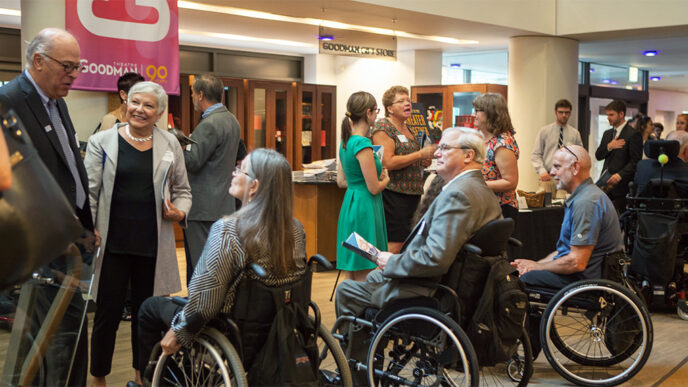 Creating a Local Culture of Inclusion

All the world’s a stage, Shakespeare wrote. But what are theaters, concert halls and other cultural institutions doing to make sure that everyone can see the show?

That was the question that brought together leaders from the Goodman Theatre, the Museum of Contemporary Art, Steppenwolf Theatre and many other eminent Chicago arts organizations on Sept. 1, 2015, to the Goodman Theatre for the Greater Together Cultural Accessibility Summit, an ADA 25 Chicago project addressing accessibility for arts patrons with disabilities.

Shifting societal perspectives on disability, the need for continued vigilance around accessibility, and the notion of accessibility as an organizational advantage were just a few of the themes Siegel touched on. “If my theater is accessible and yours isn’t,” she said, “people are going to come to mine.”

Siegel also explained that accessibility depends not just on technology, but on the skills and attitudes of staff members as well. “If you don’t do anything else, go home and train your staff immediately,” Siegel said. “They are either your best accessibility asset or your worst nightmare.”

Other highlights of the summit included a panel discussion with Gallo and Pemberton about making the business case for accessibility. “Either you’re gonna be attentive to this community, or your competition will be,” Pemberton said. In addition, Thornton, Botts and Finke shared their experiences in the arts community as people with disabilities.

“If you don’t do anything else, go home and train your staff immediately. They are either your best accessibility asset or your worst nightmare.”

The summit was just one installment of the year-long 25 for 25 Cultural Access Project, in which more than 30 cultural organizations committed to increasing accessible programs and services, learning about best practices and creating accessibility plans for the future. Participants in the project received access to trainings, checklists, best practices, workshops and networking opportunities, along with support from the Mayor’s Office for People with Disabilities and the Chicago Cultural Accessibility Consortium.

“It was powerful,” says Emily Harris, ADA 25 Chicago executive director. “And the participants represented a huge range of organizations. We had tiny storefront theaters doing their first-ever touch tour, where people who are blind can come on stage before the performance. Others are doing training for their front-of-house staff about accessibility.”

“The Shedd Aquarium worked with the Chicago Lighthouse for the Blind to create a new exhibit of touchable fish, and the Museum of Contemporary Art has added visual descriptions of all their art as big labels that will flash on the wall when you walk by,” Harris said. “The cultural community has really stepped up, and that’s a huge thing.”

Meanwhile, the Greater Together Cultural Accessibility Summit remains an example of the kind of communication and innovation that can result when a community comes together around a vital issue. “The arts need to be open to people with disabilities,” says Marca Bristo, Access Living president and CEO and co-chair of the ADA 25 Chicago Steering Committee.

“It’s hard to put a value on how important it is for people who don’t live with disabilities to experience people with disabilities out doing everyday things. That’s how, I think, we break down the biggest barrier that still remains—people’s misunderstandings.”