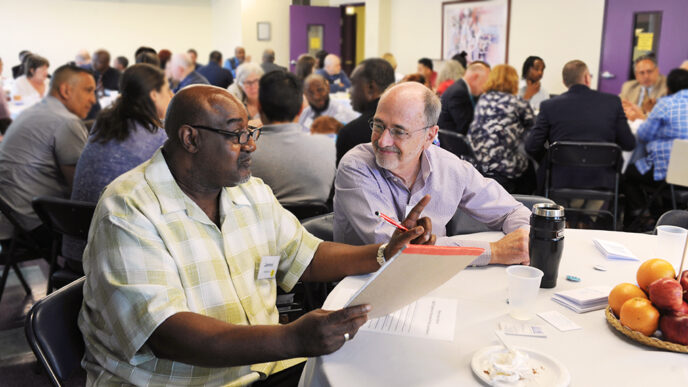 Conversations Matter: Four Years of On the Table

This year on May 8, people all over Chicagoland will gather around tables in dining rooms, conference rooms, community centers, restaurants and even in their neighbors’ kitchens for a conversation over a meal or refreshments.

Although I have been involved with The Chicago Community Trust’s On the Table initiative since 2014 I continue to be amazed by the power of a concept so simple—a good conversation with friends, neighbors, colleagues or even strangers over a meal. The Trust estimates that On the Table has drawn together nearly 200,000 people to discuss topics that matter to them. Now an annual tradition, On the Table has become an important part of the civic culture of the Chicago region.

The center I direct, the Institute for Policy and Civic Engagement at the University of Illinois at Chicago, served as the research partner for On the Table from 2014-2017, and has conducted an in-depth follow up survey of participants each year. As the director of IPCE, I can speak in an unbiased way about what we have learned participants in the Chicago region discuss during these conversations and how those conversations are inspiring them to act.

43% of respondents reported staying in contact with someone they met at their conversation that they did not already know. At a time when division along political, racial and class lines seems so intractable, strangers are leaving a conversation with new connections with the possibility of bridging divides.

After collecting over 11,500 surveys online and in paper form over the past four years of On the Table, I am struck by a remarkable consistency in some of the key data we have observed. While this survey is self-selected and non-scientific, a huge amount of data from the approximately 12,000 respondents provides valuable insight even if it cannot be generalized to the population as a whole.

For example, we found that the same four key issue areas have emerged year after year in respondents’ conversations and concerns: equity and social inclusion; education and youth development; public safety and the judicial system; and economic issues and poverty. Regardless of recent news, and even during a period that included a presidential election, these topics were in the top five every year of the survey.

Another consistent observation across the four years is that On the Table conversations were helping respondents become better informed. Nearly 70% of respondents indicated they were somewhat to much better informed about community issues following the discussion. Respondents learned from other participants.

88% of respondents were likely to take some type of action following their conversations. On the Table participants are not simply discussing issues—they are also thinking about what they can do.

We also observed that despite concerns about the public withdrawing from civic life, more than 70% of respondents over the four years describe themselves as “somewhat” to “very” involved in their communities. This involvement question is also highly associated with voting and other indicators of civic engagement, so we see On the Table drawing out the civically engaged.

Respondents have also indicated that On the Table events are bringing strangers together and helping them make new connections. In 2016 and 2017, 43% of respondents reported staying in contact with someone they met at their conversation that they did not already know. At a time when division along political, racial and class lines seems so intractable, we took hope from the observations that strangers are leaving a conversation with new connections with the possibility of bridging divides.

Perhaps the most powerful observation across the four years is the extent to which respondents have indicated that the conversations have inspired action. The survey indicates that 88% of respondents were likely to take some type of action following their conversations. Knowing that such a high percentage of respondents link their conversations to action is highly encouraging. On the Table participants are not simply discussing issues, they are also thinking about what they can do about those issues.

This consistency in the topics respondents discuss, how they are learning from others about key issues in their community, the extent to which these discussions are bringing strangers together and the extremely high percentage of respondents likely to act all tell us that the impact of On the Table goes beyond just the discussions themselves. These are all enduring impacts that are also reinforced annually.

When folks across the region gather again on May 8 for On the Table conversations, they will be doing more than talking—rather they will be connecting, learning and planning what they might do to address their most pressing issues.

Meet. Share. Do. Sign up for On the Table today and join a movement of thousands of Chicago-area residents who are building relationships and taking action to benefit our neighborhoods and the public good.