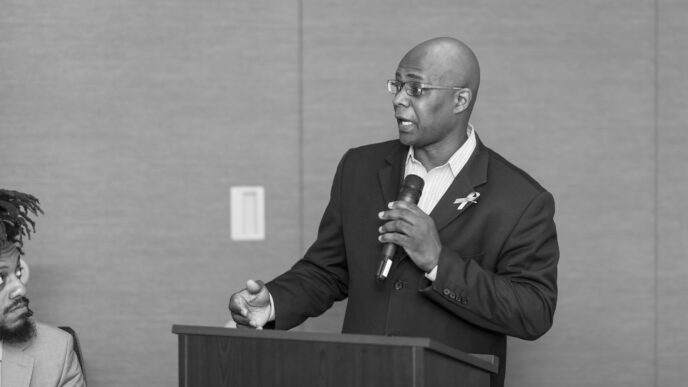 Two years after his passing, the legacy of Donald Stewart lives on. In March, The Chicago Community Trust and African American Legacy awarded their second Donald Stewart Fellowship to Claude Robinson, executive vice president of external affairs and diversity at UCAN. The virtual ceremony, which took place on March 17, 2021 opened with a performance by the Spelman College Glee Club and closed with remarks by members of the Stewart family.

Robinson is the second recipient of the fellowship, whose purpose is to highlight Black community leaders who embody Stewart’s legacy. An educator and Chicago native, Stewart served as president of Spelman college for 10 years, then as president of The College Board, before coming president and CEO of the Trust. During Stewart’s tenure as president and CEO of the Trust, African American Legacy was formed as an extension of the Trust’s philanthropic work. African American Legacy is led by civic and community leaders with the goal of improving the quality of life of Black Chicagoans. By engaging Black community members in philanthropy and supporting grassroots organizations, AAL provides support and solutions to problems at the root of our community. Stewart’s leadership and dedication to the fields of philanthropy and education have left a last impacting on the Black community.

At UCAN, Robinson is seen as a pioneer in the Diversity, Equity, and Inclusion (DEI) space. His approach to DEI focuses on board and community engagement, leadership commitment, supplier diversity, and employee resource groups. This approach ensures DEI is incorporated into UCAN’s culture and day-to-day operations.

“Our DEI model started back in 2003, when we first started having deep conversations about diversity, and it was actually diversity. There was no equity, there was no inclusion, there was no belonging, no othering,” said Robinson. “At the time, because of who we serve at UCAN, predominantly African American and Latinx youth, children, and families, we were in those communities as well. We started to talk about what we can do as an organization to make sure that we’re best in class, culturally relevant, and culturally responsive to communities of color.”

Robinson was nominated for the fellowship by Kim Casey, chief program officer at UCAN. Casey regarded Robinson’s role as a selfless servant leader as the reason she decided to nominate him for the fellowship. She says Robinson builds bridges across the entire Chicago region, connecting people and organizations together through expertly cultivated relationships and common goals.

“What I want people to understand about Claude is, he does his work whether you’re looking or not,” said Casey. “I believe that if Claude wasn’t at UCAN, wherever he was going to be, he would be doing this work regardless. Because he has a commitment to youth; a commitment and a passion to serving our community.”

Robinson plans to honor the legacy of Stewart by not only growing and strengthening his role in DEI at UCAN but through youth leadership as well. Robinson believes in forming cultural bridges where young people can not only learn from adults but, adults can learn from young people as well. At the ceremony, Robinson shared his plans to take a small cohort of youth on an exposure outing to Memphis, TN and Selma, AL. These exposure trips aim to educate and inspire a new generation of young leaders by taking them down the historical paths of leaders like Dr. Martin Luther King, Jr.

Baronica Roberson, co-chair of the African American Legacy Advisory Board, pointed to Robinson’s commitment to his work as to why AAL selected him as the second recipient of the fellowship.

“There were many things that impressed me, but I think what stood out the most was Claude’s years of sustained commitment to DEI and those to whom UCAN provides service,” said Roberson. “I was also very impressed with how well his peers spoke of him and his commitment to community.”

For Robinson, his commitment to leadership and service to his community runs deep and is everlasting.