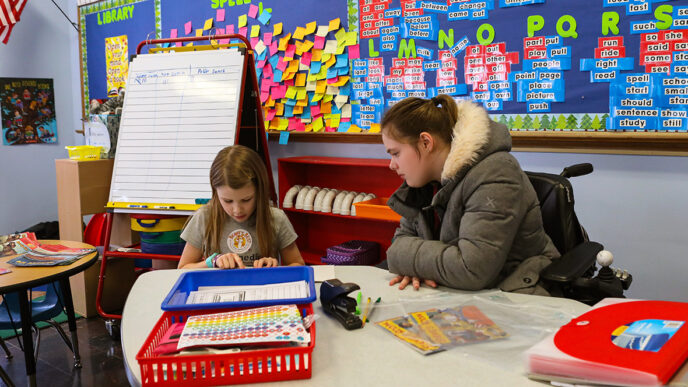 Closing the Employment Gap for Young Adults with Disabilities

For a person with a disability entering the workforce, the biggest challenge can be simply getting in the door.

The Center for Independence through Conductive Education is helping people with motor disorders challenge those barriers. They focus on increasing skills that will help prepare children and young adults for the workforce, while also overcoming the stigma and the knowledge gap that make employers less ready to hire workers with disabilities.

Once you’re in, Gina Schergen tells a group of program participants, employers are “really able to see how much good you can bring and how many skills you have and different ways that you can contribute to a business too.” Schergen, an occupational therapist, heads CFI’s young adult program.

“I would say it’s twofold, or many-fold,” chimes in Ani Hunt, another CFI staffer. “It’s getting in the door, but it’s also having employers that are willing to put in the time to see your growth and evolution, and customize your job setting so that you are able to succeed.”

“You need people who are open to the possibility of creating an opportunity rather than saying ‘No, you can’t do the job,’” Hunt adds. “Instead of fitting a square peg into a round hole, why not say, ‘Why don’t we change the shape of the hole?’”

In the Chicago region, people with disabilities are twice as likely to live below the poverty line as people without disabilities. CFI provides $850,000 in free services each year to serve 250 kids and young adults, 60% of whom live in low-income households.

Hunt, who has cerebral palsy and uses a wheelchair, has participated in programs at CFI since she was 13. Now 29, she holds a masters degree in social work from the University of Illinois at Urbana-Champaign. Completing her degree required her to do a practicum—but although she went on countless interviews, no one would hire her.

“Patti knew my struggle,” she says of CFI director Patricia Herbst. Herbst solved the problem by creating an internship for Hunt at CFI. Once Hunt earned her degree, she was hired on as staff, working three days a week with Schergen in the young adult vocational program and elsewhere as needed.

“The moral of my story,” Hunt says, “is that Patti was insightful enough and willing to give me an opportunity—but also that if there is not the right opportunity out there, create your own.”

She points to Ethan Olson, an 18-year-old athlete and entrepreneur with cerebral palsy, as an example. Last summer, Olson’s adaptive golfing skills were featured on ESPN SportsCenter. Olson’s company Driven by Determination makes graphic tees celebrating the accomplishments of people with disabilities. He’s sold $2,000 worth of shirts to date.

First graders at St. Benedict Preparatory School listen to teacher’s assistant Robyn Heath reading aloud. Heath, a program participant at CFI for 15 years, is the first person to use a wheelchair at the school.

Patti Herbst and her husband Chuck started CFI in 1998. Their son Justin, who was born prematurely, suffered a severe stroke soon after. Justin was diagnosed with cerebral palsy, and has quadriplegia. Frustrated with the inability of traditional medicine to help her son, the Herbsts enrolled Justin in a conductive education program. After five weeks of therapy, they were stunned to see him sit up on his own.

Developed in Hungary, conductive education is designed to help people with neurologically derived motor disorders develop skills for independent living: how to put on a shirt, how to hold a spoon, how to clearly ask for help. Through daily practice, patients develop new neural patterns to help accomplish these and other tasks consciously, with an emphasis on problem-solving and active participation.

After earning his degree from Southern Illinois University, Justin now works at UPS.

Based in Countryside, CFI has grown to operate four sites across the Chicago region. A new facility in Brighton Park is scheduled to open in May, serving 40 to 50 kids and young adults.

A longtime grant recipient of The Chicago Community Trust, CFI most recently received funding as a partner in the GO Grant pilot program, providing general operating funding to organizations serving essential needs across the region.

“At the beginning of the school year the kids had questions, like, ‘Why are you in a wheelchair? Why can’t you walk?’ I would just say that my muscles work different, that I was born this way,” Heath says—an explanation her students understood without missing a beat.

The Center never turns away a child based on their family’s ability to pay for care. Herbst estimates they provide $850,000 in free services each year to serve 250 kids and young adults, 60% of whom live in low-income households.

Breaking the cycle of poverty is a passion for Herbst. According to the Bureau of Labor Statistics, in 2017 only 18.7% of people with a disability in the U.S. were employed. Without a job, it’s almost impossible to cross the poverty line. Meanwhile, Medicaid often won’t cover CFI’s treatment, which Herbst finds frustrating in its short-sightedness.

“You can either pay for education now, or pay for care across a lifetime,” Herbst says.

As children at CFI grow into young adults, the program increases the emphasis on putting the independent living skills they’ve learned to work. By partnering with initiatives like Teaching Together Chicago, which works to find people with disabilities work in Chicago’s Catholic schools, CFI has helped place 70 participants in school internships.

Robyn Heath is one of them. A CFI participant for 15 years, Heath studied elementary education at Wright College for a year before starting work as a teacher’s assistant at St. Benedict Preparatory School last January. She’s now one of two people with cerebral palsy working at the school.

Four mornings a week, Heath travels the few blocks from her family’s home to St. Benedict’s, where she helps the kids in Mrs. Geppert’s classroom with reading, writing and all the other activities of first-grade life. “I’ve gotten so much experience working with small children,” she says, “and just being able to be in a stable workplace is great.” She hopes to continue her studies next year and eventually move into her own apartment.

Experiences with teachers like Heath and fellow students have changed younger generations’ perception of disability. “Because of the ADA, and because of inclusion, these kids grew up alongside children with disabilities,” CFI directer Patti Herbst says. “When they enter the workforce they are saying, ‘Where are the wheelchairs?’”

Heath is the first person at St. Ben’s to use a wheelchair. However, the school needed to make only small, inexpensive accommodations to make the building accessible—things like putting bungee cords on door handles, so that she can pull herself into a room and close the door from her chair.

“At the beginning of the school year the kids had questions, like, ‘Why are you in a wheelchair? Why can’t you walk?’ I would just say that my muscles work different, that I was born this way,” Heath says. The first graders understood and accepted her explanations without missing a beat.

Patti Herbst also sees a different perspective among younger generations—one that will change the world. “Because of the ADA, and because of inclusion, these kids grew up alongside children with disabilities. When they enter the workforce they are saying, ‘Where are the wheelchairs?’”

“Disability just is part of the landscape,” she adds. “We respect it, and we wouldn’t want to fix it. We just want to maximize the potential of a person with a disability just like we would with any other child.”