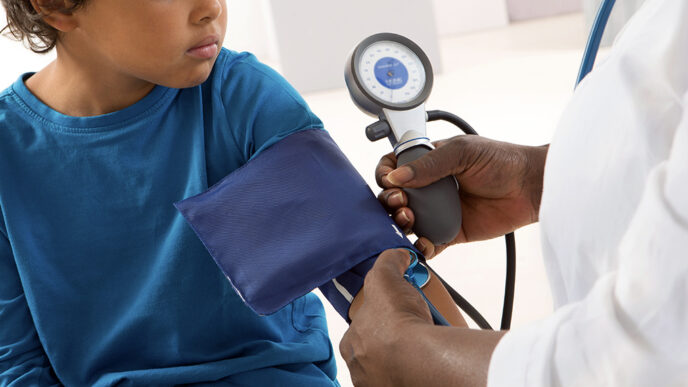 Earlier this year, Congress passed a bill to extend the Children’s Health Insurance Program, known as CHIP, which provides health insurance for 9 million children in the United States.

Amid debate about the repeal of the Affordable Care Act, authorization for the longstanding program had been allowed to lapse last September. Two separate Congressional actions in January and February reauthorized CHIP, extending its funding for 10 years to come.

But recently the future has been thrown into doubt again, as President Trump requested a $7 billion cut to CHIP funding, part of $15 billion in overall cuts to federal spending. Although the CHIP cuts would come from peripheral funds, rather than core operating dollars, it’s uncertain how the recission package will move forward—or what the loss of CHIP contingency funds could mean for its future.

This spring the Trust’s Rachel Pate talked with Kathy Waligora, director of the Health Reform Initiative at EverThrive Illinois, for an expert look at what CHIP is and why it matters for our communities.

Rachel Pate: So, first: What is CHIP?

Kathy Waligora: The Children’s Health Insurance Program was enacted in the ‘90s to fill a gap in health coverage for kids in working families. It stands on the shoulders of Medicaid to provide health care for kids who do not qualify for Medicaid, and whose families otherwise lack access to affordable insurance—either through their employer, or through the individual market.

Medicaid covers children in extreme poverty, where CHIP covers those kids who are just above that in terms of income, but still don’t have health insurance. It’s built into Illinois’ All Kids program, so every kid in Illinois, regardless of whether they’re utilizing Medicaid or CHIP, is benefitting from All Kids.

Pate: What does CHIP look like in Illinois? Who uses the program, and what kind of impact does it have for families in our state?

Waligora: In Illinois, at least 300,000 children are covered by CHIP—a sizeable population.

CHIP essentially covers uninsured kids and families who do not qualify for Medicaid or other affordable health insurance, and have income up to about 300% of the Federal Poverty Level. This is just under $65,000 a year for a family of three.

These children have monthly premiums and co-payments for their services, but they are much lower than what you would find on the individual market: depending on the family’s income, the premium is between 15 and 40 dollars. In Illinois, if you are a person under 21 with CHIP, anything you need, diagnosis or treatment, has to be covered. This isn’t matched in private insurance. It is important not just for filling the gap—for meeting the needs of families who are above Medicaid eligibility—but for making sure that kids are actually getting high-quality care.

“We always need to be talking about the importance of CHIP. They funded it for ten years, but what happens next year, or the year after? They can go back and un-fund programs, or cut programs. So we’re constantly doing our part to make sure people, especially decision-makers, understand.”

Pate: Has CHIP been affected by the Illinois budget crisis?

Waligora: CHIP is a partnership and a block grant. Funding wasn’t reduced and service wasn’t disrupted. We haven’t seen any change into Medicaid eligibility or benefits as a result of the budget impasse, and that’s true for Medicaid and CHIP.

Waligora: Although it is hard to say, we don’t believe that it did. In Illinois, unlike in other states, we had enough funds from our block grant to float for a couple months. Other states, like Colorado and Alabama, had to send letters out in January saying, “Hey, we might not be able to do this anymore.”

The other factor you have to think about with CHIP is that it covers children regardless of their immigration status—they are covered entirely with state money. With that being said, a lot of these children have undocumented parents. We have to think about the impact of fear and uncertainty in how the federal government approaches immigrants, and how that could impact enrollment. Policies that are being proposed around immigration could have a big effect in the future. This could cause families who are eligible to be fearful of enrolling in benefits or renewing benefits.

Pate: And now that federal funding for the program has been extended, are there still worries for the future of the program?

Waligora: There had been a concern that Congress may not give the appropriate funds because they may believe that children can get healthcare access elsewhere, but what we have seen is that children’s needs are not being met elsewhere. The ACA was designed with adults in mind, not children, so we are worried members of Congress might have the false notion that those kids are taken care of.

But the numbers are in our favor. Funding the program for 10 years will have no cost to the federal government because of the benefits and the cost savings of having healthy children.

“CHIP covers children regardless of their immigration status—they are covered entirely with state money. We have to think about the impact of fear and uncertainty in how the federal government approaches immigrants, and how that could impact enrollment. Policies that are being proposed around immigration could have a big effect in the future.”

Pate: It’s clear how protecting CHIP would be integral to EverThrive Illinois’ mission to improve the health of women, children and families. How did you go about working to protect it?

Waligora: The first thing you want to do with any issue is education. We needed to make sure that decision-makers, influencers, providers and advocates understand the role that CHIP plays, and the value that CHIP adds to the Medicaid program. We did that through publications, webinars, data sheets and lots of social media. This was to help people understand: What is CHIP? What is at stake if it’s not funded? What can Congress do to help?

We have hosted convenings, supported mobilizing work, encouraged and helped to schedule meetings between constituents or advocates and members of Congress.

We also worked with early childhood providers that really care about the health and development of kids. Early childhood advocates like the Ounce of Prevention Fund, Legal Council for Health Justice and Illinois Action for Children were included in our planned advocacy activities.

Pate: Now that CHIP has been renewed at the federal level for ten years, is the effort complete? Are you all moving onto other fights with a sigh of relief, or should we still be concerned?

Waligora: We always need to be talking about the importance of CHIP. They funded it for ten years, but what happens next year, or the year after? They can go back and un-fund programs, or cut programs. So we’re constantly doing our part to make sure people, especially decision-makers, understand the unique role that CHIP plays, the important population that it serves and how it provides some additional support beyond Medicaid.

Our Medicaid program is essential for half of all children in the state. So while CHIP itself is taken care of, we want to continue to talk about the important role that it plays—and then we talk about how CHIP can’t function without Medicaid. If you really care about supporting access to care for children, you just can’t cut Medicaid, you can’t restrict Medicaid, you can’t convert it to a block grant. In fact, we should be providing more support to that program.

A longtime grant recipient of the Trust—and a GO Grant recipient to support their essential role in reforming the health system to work for local communities—EverThrive Illinois works to improve the health of women, children and families over the lifespan. Find them online at everthriveil.org.